Here are some tips on winter identification

I started out asking Matt Decker, who is stewardship coordinator at the Hudson Highlands Land Trust, how to identify trees in winter and ended up with a wider understanding and far more curiosity about how trees interact. 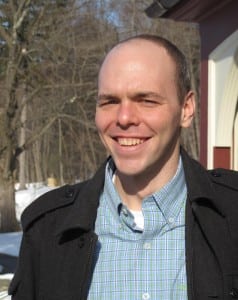 Decker, who studied forestry as part of his Masters of Environmental Management degree at the Yale School of Forestry and Environmental Studies, said his knowledge came less from the classroom and more from being out in the woods and hiking with people who are passionate about trees. During our interview, his enthusiasm and genuine excitement for how cool trees are was infectious.

Tree identification, what are some things to know about it?

You can take the botanical approach and know the nomenclature and all the names of the specific tree parts and ID those specific parts. The other way is to do it the way you recognize faces. If you know a tree with the leaves on and pay attention to the bark when the leaves fall off, you’re going to know it without [looking at specific parts]. That’s the way I do tree ID. That’s what I really recommend for people who want to get good at it.

What are some of the things to notice?

What are some examples of alternates?

All oaks, beech and birch. Maples and dogwoods are opposites. Here’s an easy way to remember it. As a general rule of thumb, the trees in our area that are opposite are MAD-Horse (Maple, Ash, Dogwood and Horsechestnut).

What about bark as an identifier? If you’re looking at a maple, will it always look the same or does it change as the tree grows?

It will be different. We have two major maples here, red and sugar, and barks are different on each of those and, depending on the size of the tree, the bark can be very different, too. In red maples, the bark starts off smooth and gray and by the time it’s 100 or more years old, it’s shaggy. In between it goes through this interesting metamorphosis of plated bark. It’s hard because there can be so much variation in the bark. 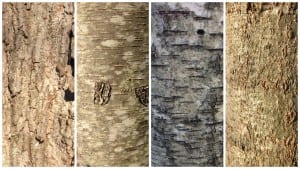 The ridged bark of a sugar maple; scratch the bark of a black birch and the wintergeen scent is a giveaway; lenticels and color make the paper birch easy to ID;  and rust-colored ”ski tracks” on a red oak (photos by P. Doan)

If you start with bark, should you then look at the twig pattern?

You have to use all the clues you have available. There are a few tricks. If you see horizontal little slashes, you know you’re looking at a birch or a cherry. Those are called lenticels. Another handy trick for black and yellow birch is to scrape off the top bark and sniff the green cambium underneath and sniff it. If it smells like wintergreen, you know you’ve got yellow or black birch.

Sometimes the bark is a dead giveaway, though. Paper birch has a distinguished white bark. Sycamores have this kind of exfoliating bark that’s brown at the bottom and white at the top. There’s no other tree around here that looks like that. If you see something that’s big and has smooth, gray bark, you know you’re looking at a beech tree.

Any other tips or guidance that help with identification?

You can tell the difference between oaks based on the bark. We have four major oaks that are native. Red oak is the most prevalent. The bark has vertical lines like ski tracks that are rust colored. Black oak looks like alligator skin. (Those two trees can hybridize and will show both characteristics.) White oak has a shaggier bark and will rub off. Chestnut oak has thick, corky bark, like a movie version of a dinosaur leg.

What I really love is that sure, you can identify some trees and know their names, but what’s more fun is seeing this slow-motion movie that’s played out over the years. You can see these sorts of clues and read the landscape. Knowing the tree’s strategies and why they’re growing in that place is more fun to me.