Beacon Bath and Bubble (BBB), the retail store specializing in just those things, is hosting an exhibit curated by and benefiting the Beacon Historical Society (BHS) consisting of vintage photos, objects and ephemera relating to Beacon’s East End. The comparisons between then and now are made all the more fascinating by the ability to simply open the door, step outside and view the “now” before returning to peruse the “then.”

That easy connection between the not-so-long-ago past and what remains today is what draws many to the archives of the historical society. “What I love about Beacon is that old and new exist here at the same time,” said board member Diane Lapis, who has been involved with the society since moving to the area five years ago. “It’s real, it’s in your face.”

Because so much of the East End remains — if not intact, at least quite recognizable through time — it’s easy to identify the buildings in the photographs on display. Just across the street from BBB, in what is now the Seoul Kitchen restaurant, stood Hoysradt Ormsber Brothers Undertaker. There is an arresting image from 1912 of what was originally the Dibble Hotel, a 75-room establishment with Federal-style columns that were removed in 1926. Then there’s the Maze Hook & Ladder firehouse, at 425 Main St., built in 1911 for the “Hooks,” Matteawan’s second volunteer fire company. 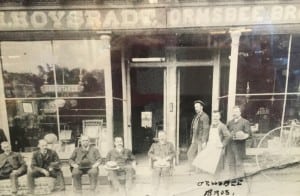 CH Hoysradt Ormsber Brothers  – an undertaker business, on the site of what is now Seoul Kitchen (BHS collection)

And did you know that Joe’s Pub, at 455 Main St., has been a bar for more than 100 years? So has 554 Main, always a “drinking establishment.” During Prohibition it was Alphonse Pietrowski’s Soda Fountain, though “hard liquor was also known to be gotten,” according to the exhibit. Liquor is still “being gotten” there — it’s now The Hop.

The list goes on, from the Beacon Theatre (a late bloomer, arriving in 1934) to the earlier First Methodist Church, shown in a 1910 postcard. Erected in 1869 and 1870, its 114-foot steeple still dominates the East End landscape. Images of the “Brown Block,” as the stretch of Main in which BBB is located was known a century ago, show a reasonably unchanged architectural landscape and of course are part of what appeals to residents and visitors today.

Rounding the bend, it’s an easy correlation between images of the Matteawan Railroad Station, located at Main and Churchill, with what remains today. Many railroads used the facility, the New Haven Railroad being the last to offer regular passenger service in 1933. Further along, as Main becomes East Main, there’s the Carroll Straw Hat Factory, built in 1911. 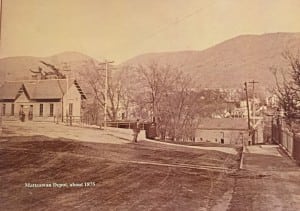 A view of the Matteawan Railroad Station, located at Main and Churchill.  Today the complex, located just past the curve of Main, holds beauty salons and apartments. (BHS collection)

The many entities with Matteawan in their name are reminders that Beacon was formed, in 1913, by the merging of Fishkill Landing, a port town, and the more easterly Matteawan, which found its identity in manufacturing, with many mills and factories. A number of books delving into Beacon’s history are available for sale at the exhibit, including Historic Beacon, from the Images of America series, and a volume produced three years ago: Beacon at 100, Celebrating Our Centennial.

The Beacon Historical Society proposed the exhibit to Beacon Bubble & Bath owner Brenda Murname, a history buff, who was happy to host it. “Brenda was so accommodating — she wants to see us succeed,” Lapis says. Murname, who has researched the history of her store, located at 458 Main St., determined that the property once belonged to the Marchio family and held an ice cream shop where Murname now produces the soaps she sells. She created a new soap, “Mt. Beacon Air, 1892,” to benefit the historical society. 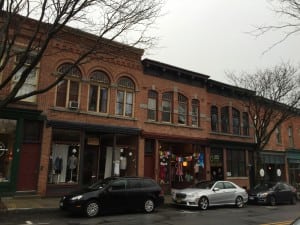 A stretch of the ”brown block” of Beacon today (Photo by A. Rooney)

There has been a great deal of interest in the exhibit, which continues through April 2. The opening reception on Feb. 13 drew more than 100 people, and another reception is scheduled for   Second Saturday, March 12. The society hopes that understanding how lives were lived in the buildings still standing may help to prevent their loss in the future. Although much of Beacon is preserved, a great deal was lost in the 1960s to what was then called “progressive” urban development. Perhaps that’s a subject for a future exhibition.

For more information, visit beaconhistorical.org. The society’s website offers a self-guided historic walking tour of the East End of Main, which is good preparation for visiting the exhibit. East End of Main — A Journey Into the Past is open during BBB’s store hours, which are 11 a.m. to 6 p.m. Wednesday through Sunday and noon to 4 p.m. on Sunday.