The Northern Dutchess Symphony Orchestra will premiere Walkway Over the Hudson, an original three-movement work commissioned by the NDSO and written by 24-year-old composer Ben Kutner.

The orchestra will perform the work under the direction of Kathleen Beckmann at 8 p.m. on Saturday, April 2, at The Culinary Institute of America’s Marriott Pavilion in Hyde Park. 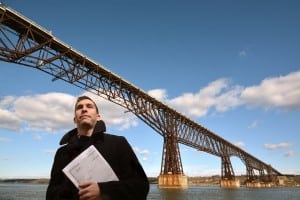 Each movement of Walkway corresponds loosely with a chapter in the bridge’s history: a vital rail link, a fire-damaged structure lying in disuse, and the footbridge that exists today. “I wanted the audience to hear the same bridge at every moment of the piece,” Kutner said.

In recognition of the 100th anniversary of the National Park Service, the orchestra also will perform Ferde Grofé’s Grand Canyon Suite. Both works will be accompanied by photographs of the Grand Canyon and the Walkway, a former railroad bridge, projected on a screen behind the orchestra. Photos of the bridge have been selected from thousands taken over the past 23 years by Fred Schaeffer.

Tickets are $20 ($5 for students and $15 for seniors) and can be purchased at  ndsorchestra.org. For more information, call 845-635-0877. The Caterina de’ Medici restaurant at CIA will offer a $39 pre-performance pasta meal (excluding beverages and tip). Reservations are available from 5 to 6:15 p.m. To book a table, call 845-905-4533 or email [email protected] For directions, see halfmoontheatre.org/visit-us.