Annual bee is fundraiser for PFCS

The Akzo Nobel Bees, a team from Akzo Nobel Chemicals in Brewster, repeated as champions of the Adult Spelling Bee organized annually since 2001 as a fundraiser by the Putnam Family and Community Services (PFCS), a private non-profit agency providing outpatient mental health and substance abuse services. Twenty-five teams vied for the trophy through 11 intense rounds. 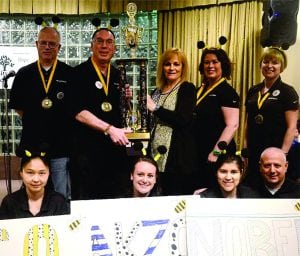 The Akzo Nobel Bees claimed the championship by spelling  trypanosomiasis, a noun meaning “a sleeping sickness, disease caused by parasites transmitted by insects.” (It won last year with zymurgy, a noun meaning “a branch of chemistry dealing with the fermentation process.”) The Putnam Pirates from Putnam Hospital Center/Health Quest took second place, and the Akzo team and Patterson Library Ninjas were recognized with the “most enthusiastic cheerleaders.”