Understanding the art of Dia:Beacon

The description of a workshop held at the Howland Public Library in Beacon on April 19 promised a discussion and introduction to the history and sites of the Dia Art Foundation. But the arts educators from Dia:Beacon, the foundation’s museum here, quickly made it clear their program would not be exactly that.

Instead, said Kirsten Mosher and Alexandra Vargo, participants would create their own art as a way to understand the themes explored in the collection and how the contemporary artists featured at the Beacon museum approach their work.

Mosher and Vargo first asked attendees to introduce themselves and explain why they had come. Some were Dia members and said they visited the Beacon collection often; one, a Beacon native, said simply, “I want to know more about what’s going on that place.” The library’s relatively new director, Amy Raff, also took part, noting she had just become a museum member.

Mosher discussed the language used by some modern artists such as Sol LeWitt, who creates graphite words that drafters can take and interpret, following his directions. Mosher rattled off a stream of his words and phrases: series, composite, grid, not straight, random, broken lines, points, arcs, uniform. 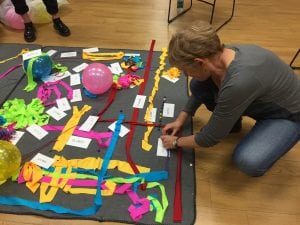 A participant adds her expression of words through objects and use of space at the DIA presentation at Howland Library.  (Photo by A. Rooney)

She continued by sharing a list of verbs that sculptor Richard Serra constructed in 1967 and 1968 that pushed his art in a new direction. These verbs became “the way he moved steel,” Mosher explained, rattling off wave, dilute, repair, bond, crumple, split, remove, encircle, hinge, splash, rotate, scatter, continue.

“What shape does that word make?” she asked. “Today we’re going to come up with words that describe things that are happening in this room, using language these artists would use. Then we’ll use the language as directions to move things around the room. All will accumulate on our mat. We’ll be drawing in space, creating something that will surprise us.”

Participants took index cards and surveyed the room, including paintings on the wall, and listed words describing aspects of what they were viewing. They laid the cards on a mat covered with materials: ribbons, balls, fabric. Mosher asked everyone to choose a card, then choose a material, and then to use that material in the way the card instructed, on an empty, adjoining mat.

All the while, Vargo filmed the  mat, documenting the creation as it happened. At the conclusion it had become a colorful explosion of the directives of the guiding words: crossing, weaving, smush, angle, radiate, etc., the cards themselves interacting with their embodiments.

That exercise complete, Mosher said the question at hand was: “How does this help us make sense of what we’re looking at?” She said that participants had just gone through a process that artists whose work is included in the Dia:Beacon collection use.

“After you do an activity like this you can ask yourself ‘What does my language mean? What does movement mean when walking through a piece?’ It’s a physical action,” she said. “We’re having a chance to rethink the ideas of language and movement as opposed to thinking about what it might mean symbolically. LeWitt said, ‘It is what it is,’ and that was meaningful to this generation of artists who are now in their 70s.”

Mosher cited Robert Ryman, whose white paintings are a focal point at Dia:Beacon. “When he walks into his studio he’s asking ‘How can I talk about what is a painting in a new way?’ ” she said. “When you see his work, he’s making experiments, answering that question in many different ways.”  Vargo added: “That’s something we try to parallel: the artist educators are coming in with a question they investigate with the students. Here, the space informed us and you informed it.” 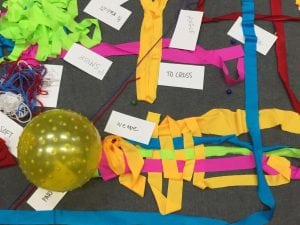 Angle, weave, to radiate: all words and actions were depicted physically on a mat, suggesting an artistic process specific to one used by some contemporary artists. (Photo by A. Rooney)

The program continued with a discussion of how perspective changes the view of what is seen, such as with Dan Flavin’s “barrier” light installation. “Being at Dia is a very active experience, and there are so many different ways to activate it,” said Mosher. “It’s a slow process and there’s a ritual of going back.” As the majority of exhibits are permanently installed, there is amply opportunity for this.

The women then provided a quick tour of Dia’s constellation of sites, including those in New York City, as well as elsewhere in the U.S. and at Kassel, Germany.

Dia:Beacon, which is located at 3 Beekman St., will hold its next Community Free Day from 11 a.m. to 6 p.m. on Saturday, May 14, with free admission, a gallery talk at 2 p.m. (Rattanamol Johal will speak on Joseph Beuys), interactive family programs and live music. For more information, visit diaart.org.