A report issued this week by the Scenic Hudson land trust warns that Hudson River tidal wetlands — the grassy, marshy areas near the river’s shore — could be shrinking, as climate change accelerates sea level rise and, consequently, the height of the river.

In its report, the Poughkeepsie-based land trust recommends a multi-pronged strategy for increasing the wetlands’ resistance to rising waters.

The group’s plan maps the pathways — lands identified as conservation priorities — that wetlands will require in order to expand inland. It also prioritizes undeveloped areas best suited for protection and identifies others that can be targeted for management and restoration. As it turns out, a relatively small number of areas and properties hold the keys to the future of the estuary’s wetlands.

Out of thousands of parcels analyzed, as few as 125 were identified as critical parcels for wetland health. If most or all  of those are protected, a significant percentage of wetland pathways could be secured, said Nava Tabak, a Scenic Hudson conservation scientist. 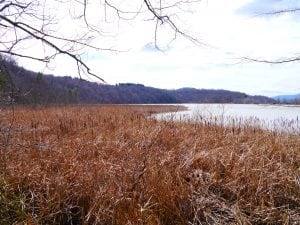 There are more than 7,000 acres of intertidal wetlands within the Hudson River Estuary ecosystem. Found in the areas between low and high tides, wetlands support fish, wildlife and plant habitats, help regulate water quality and facilitate essential functions such as carbon sequestration and storm buffering. According to Scenic Hudson, about 80 percent of the river’s tidal wetlands lie beyond the ocean’s saltwater reach — giving the region one of the largest concentrations of freshwater tidal wetlands along the Atlantic Seaboard.

Around Cold Spring and Beacon, however, the wetlands are “weakly” brackish — freshwaters mixed with some salt — but ecologically rich. Scenic Hudson calls the wetlands from Battery Park in Manhattan to Troy “the most productive and protective habitats in the region.”

The protection of these wetlands is one component of a comprehensive plan for preserving biodiversity in the Hudson River Valley, the organization’s scientists say. Later this year, Scenic Hudson plans to release a detailed conservation blueprint and action plan for combating climate change in the region.

“Tidal wetlands are some of the most productive ecosystems on the planet and have successfully adapted to changes in sea levels for thousands of years,” said Sacha Spector, Scenic Hudson’s director of conservation science. “But now the Hudson is experiencing sea level rise rates of approximately twice the global average, and with sea level rise rates projected to accelerate through the coming century, the long-term survival of the Hudson’s tidal wetlands is dependent on swift and strategic action.”

The report issued this week, titled Protecting the Pathways: A Climate Change Adaptation Framework for Hudson River Estuary Tidal Wetlands, suggests that the wetlands’ future health will rely largely on whether they continue to adapt to changing conditions, as they have naturally for centuries. That’s particularly important locally.

“Your stretch of the river has relatively few tidal wetland areas,” Tabak said on Tuesday. “What that means is that they’re even more important. You can’t afford to lose (these places), especially when we think about connectivity for migratory wildlife.”

Tabak cited Constitution Marsh, the 270-acre Putnam County wildlife sanctuary that is a stopover point for thousands of migrating birds, including a number of rare and endangered species, as one of the lower Hudson Valley’s most important places.

For generations, the Hudson’s wetlands have “migrated” — moving vertically or horizontally as they’ve adapted to gradual sea level changes. However, the river is expected to rise three to six feet more by the end of the century — a much faster rate than ever before. Because there are so many steep slopes, often directly adjacent to the river, at lower Hudson Valley sites like Constitution Marsh, the wetlands here have limited space left to move.

“Constitution Marsh is very susceptible to sea level rise because there’s not a lot of room for the marsh to move upland. The wetlands can move, but you still don’t gain a lot of real estate,” Tabak said. “So, are there activities we can undertake that will help the wetlands keep up?”

There are, the report states.

More active management, including an initiative to accelerate the transfer of the pathway connecting “underwater lands” to New York state conservation agencies is warranted, the organization says. In addition, the future of tidal wetlands in the Hudson River Estuary will depend on decisions made by thousands of private landowners, multiple state and federal agencies, and dozens of municipalities whose boundaries encompass wetland, shoreline and floodplain zones along the river, the report states.

Policy and planning approaches will be particularly important for wetland adaptation in the places that are not large enough, suitable or attainable for protection through conservation or other formal means, but which are key contributors to tidal wetland adaptation.

“We need to effectively manage the lands that are protected, and [then] what we can’t do by acquiring land, we can do by informing people about how important wetland habitat is,” Tabak said. “That’s going to be many, many people making important decisions.”