The Downing Film Center in Newburgh will present Sold, a feature film about child trafficking, at 7:30 p.m. on Monday, June 13, as long as 45 tickets are purchased by June 6. The film, based on Patricia McCormick’s novel of the same title and starring Niyar Saikia, Gillian Anderson and David Arquette, focuses on human trafficking that affects an estimated 2.4 million people, predominantly women and girls, around the world, including in the U.S. 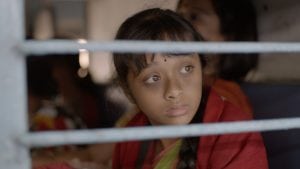 A scene from Sold (photo provided)

Sold tells the story of 13-year-old Lakshmi, who journeys from a pastoral, rural village in Nepal to a gritty brothel/prison called Happiness House in Kolkata, India. The screening is made possible via Tugg, a web-based platform for bringing movies on-demand to smaller theaters. Tickets, which are $9, must be reserved at tugg.com/events/114712.

The film is rated PG-13 with a running time of 97 minutes. More information can be found at soldthemovie.com. The Downing Film Center is located at 19 Front St.