The issue of affordable housing has proved to be a timely and thorny one in Beacon, with existing rents on the rise and a slew of housing projects in the works. Now a proposed set of changes to the city’s current laws regarding the construction and development of below-market-rate housing is being tabled for further discussion following public comments at the City Council meeting on June 20.

Working with Hudson River Housing, the city has proposed several changes to Chapter 223 of the city code as it relates to affordable housing to keep them in accordance with similar laws in surrounding municipalities. Some of the changes, including a provision that clarifies and quantifies how certain groups (e.g., city employees, city volunteers, veterans, active members of the military, first-time homebuyers, seniors and households where the head of household is under 30 years old), were presented without contention.

But two other proposed changes brought criticism from individuals representing developers during the meeting.

That proposed change may sound like a welcome relief to those interested in obtaining affordable housing. But according to Margaret O’Leary of Community Service Programs, the change would prove “deadly to both existing and future affordable housing efforts for senior citizens.”

Community Service Programs is in the process of turning the former St. Francis Hospital in Beacon into Highland Meadows Senior Housing. Under the proposed changes, O’Leary said that obtaining the necessary loans for the project would not have been possible, as the lower rents will make such projects even more unappealing to banks than they already are. 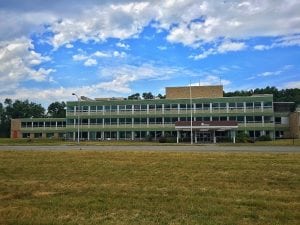 The former St. Francis hospital in Beacon, soon to be Highland Meadows Senior Housing. (Photo by B. Cronin.)

“The financing and funding of affordable housing for seniors or anyone has never been at a lower point than it is now,” she said. “Years ago, the federal government would offer favorable financing and provide subsidies to support that financing. But that doesn’t exist anymore. Any financing you use is going to require a debt. Highland Meadows at St. Francis … cost $24.9 million because it was a 50-year-old building with asbestos and lead; we could not do that development at 30 percent of 80 percent. We would have to charge rents 10 percent less than what the New York State Housing Finance Agency budgeted for carrying the $11.7 million bond during construction and a permanent bond of $5 million. We would not be able to pay our taxes, the bond, or our utilities.”

The second controversial change involved how much affordable housing had to be included in construction projects going forward, and the calculation of an “in lieu of” fee that developers could pay instead of providing below-market-rate units. The City Council would not have to accept the fee and can demand the construction of the affordable units regardless.

Currently, the law states that in every development containing 20 or more units, at least 10 percent would have to be offered below market rate. The proposed law would lower it to any development containing 10 or more units. And whereas the current calculations for the fee state they must be equal to the cost of each specific unit that is not being provided, the proposed changes would alter it to 10 percent of the total project costs.

Jennifer Van Tuyl, a partner with the law firm Cuddy & Feder, objected to these changes on behalf of several developers, including Beacon Hip Lofts and Beacon Storage.

“I respectfully suggest that there is no rational support for this fee and I think it renders that aspect of the law to be unlawful and unenforceable,” she said. “There are many ways to set a fee in lieu. The fee has to be connected to the value of the unit it replaces. Ten percent of the total project costs is unrelated to the value of the unit.”

She also said that lowering the threshold from developments with 20 units or more to 10 units or more might make future projects unfeasible. “There’s an economy of scale, and there are times when it works and times when it doesn’t,” she said. “There’s a whole universe of options out there for affordable housing beyond merely requiring a certain number of units from a developer, and we would be very happy to work with the city and exploring other options to bring more affordable options to the city. I ask you to invite the developers in this community to the table with you. I think we’ve proven that the developers are the city’s best and most trusted partner in developing housing and developing affordable housing.”

Council members voiced their own concerns with the changes, including the existence of an “in lieu of” fee at all. Council member George Mansfield pointed out that if the city were to collect such fees, they would have to be used toward constructing the affordable housing that the developers would not be providing in the first place, shifting that burden from the developers to the city. Mayor Randy Casale noted that may not be the most practical solution.

“Even if we get the money to build this, then we’ve got to find someplace to build it,” he said. “And I don’t know of a lot of property that’s just lying around here.”

In the end, the council voted unanimously to table the proposed changes and discuss them further at the July 11 workshop. Council member Mansfield noted that if developers wanted to be at the table, this was their opportunity. Although, Casale interjected, “We’ve been workshopping this for awhile, and none of them [have] ever showed up.”