The Philipstown 10-and-under and 12-and-under All-Star teams played two games this past week.

After losing its first game, the 10U team put on a gutsy performance in a rain-plagued contest on Monday, June 27. After being down 3-0 it fought back to 4-3. Then, as the rain poured, their opponent, Hyde Park, brought home another three runs to go up 7-3. 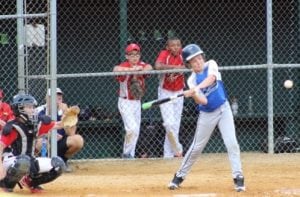 However, stellar defense by Jeremy Hall at first and a 3-for-4 night at the plate by Hunter Erickson brought Philipstown back. In the final inning the team scored three runs with two outs to get within one point of its rival. The bases were loaded when the Hyde Park shortstop smothered a hard grounder and threw to first just in time to salvage a 7-6 win. 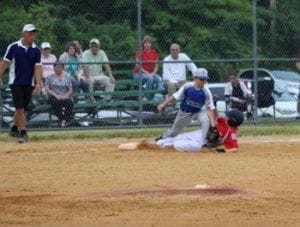 Blake Bolte at third base (Photo by Linda Bolte)

The 12U team had a 2-0 lead for three innings in its first game before an eight-run fourth by Pawling put the game out of reach. Philipstown scored two more on a home run by Darrin Santos in their last at bat but it wasn’t enough, and they fell, 8-4. On Tuesday, June 28, they ran into a Fishkill pitcher who shut them out.

Each team has two games remaining, playing next on Friday, July 1, and Saturday, July 2.