Chef discusses what to do with your CSA share

Although owning a share of a Community-Sponsored Agriculture (CSA) brings never-before-sampled vegetables well beyond green beans and lettuce to the kitchen, many people find they never get around to actually cooking or even peeling some of the more obscure selections. Let’s face it, there have been times when you forget which one is the tatsoi and which one is the name-you-can’t-even-remember and as not to confuse it with the tatsoi.

Enter Rebecca Weber to help save the weekly share. The Culinary Institute of America graduate and fairly recent Nelsonville transplant (she moved here about two years ago) spoke on June 30 at the Desmond-Fish Library in Garrison on what to do with your CSA share as part of her monthly Food Forum series there. The Thursday evening sessions include a little bit of presentation, then a little bit of cooking, followed by consumption of what’s been prepared. 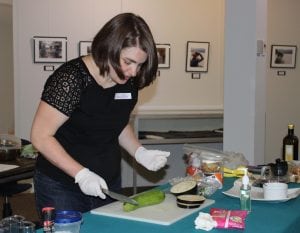 Cooking instructor Rebecca Weber demonstrates how best to slice a zucchini for a particular dish.  (Photo by A. Rooney)

On June 30, after a bit of introductory conversation about everyone’s favorite summertime dish, participants were asked what vegetables stumped them. Kohlrabi won by general consensus, although Swiss chard and mustard and beet greens came up, too (“I actually buy the beets to get the greens,” Weber said). Weber demonstrated how to slice and dice some of the beautifully prepared grilled vegetables and roasted tomatoes she had prepared in advance, along with several accompanying sauces, including an anchovy vinaigrette, a chermoula, Greek Goddess and white bean and fennel dips, an aioli and a hummus. Attendees were encouraged to sample.

Then it was demonstration time, as Weber showed slicing techniques for grilling vegetables, including how best to hold the knife. She urged everyone to “watch and focus on what you’re doing to get a straight cut.” She also showed how to chop and dice vegetables slated to be included in dishes like ratatouille. Interspersed with advice on these techniques, Weber whipped up a delicious baba ghanoush.

Everyone migrated to two tables for hands-on work preparing pappardelle pasta with summer squash and arugula with walnut pesto, and what was to be a zucchini ricotta pizza, but, due to some gluten-free dietary restrictions, wound up being a stack of the zucchini ricotta topping and, separately, a pizza base. 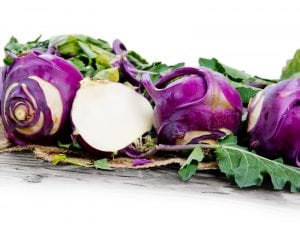 Somewhere in there, the kohlrabi still didn’t quite get its moment in the sun.  Weber did offer that the bulby vegetable — which is considered a “brassica” with cabbage, broccoli and cauliflower because it grows above ground rather than below — is popular in German, Indian and Vietnamese cuisine. It is best prepared in a frying pan with butter, and it also works well in gratin dishes. Further exploration is warranted, as it’s handily loaded with Vitamin C and potassium too.

Recipes for all the prepared sauces, the baba ghanoush and both main dishes were provided in a set, along with web links to recipes for many summer vegetables, including zucchini, eggplant, tomatoes, cucumbers, Swiss chard, kale and other leafy greens, corn, but alas no … kohlrabi, which, it turns out, is not a summer vegetable. Instead, it’s best in spring and fall, so there’s time enough to learn how best to prepare it. Hint: initial research online indicates that it may be eaten raw, steamed, roasted, made into fritters, used as a soup ingredient and with or without its greens. The taste and texture apparently falls somewhere between cabbage and broccoli stems but milder and sweeter. 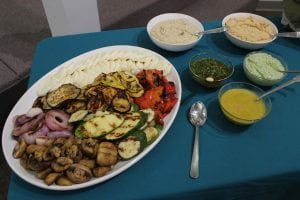 Devising a method of utilizing all of a CSA share can be as simple as grilling and accompanying with a variety of sauces.  (Photo by A. Rooney)

Weber began her series at Desmond-Fish in January with a New Year’s Resolutions (remember those?) theme and has since addressed seasonal cooking; how to roast a whole fish with chimichurri and herbed butter; breakfast crepes; and making standard and gluten-free dumplings. Future topics include homemade pasta-making and outdoor grilling, for which the location will shift from the library’s downstairs program room to the grounds outside.

“My goal is to have a fun time and send you home with some tried-and-true recipes,” she says. “If I can sprinkle in a little more knowledge about food issues or cooking techniques, I’m glad to do this. I’d also like to learn what your needs are and gear the group toward areas that interest those who attend.”

The chef grew up in Minnesota, where her parents owned a diner. She initially decided to pursue a different career path but quickly discovered that “an office job was not for me” and enrolled at cooking school.

Upon graduating, she went to work in Poughkeepsie for one of her Culinary Institute professors before switching into food safety work, where one of her clients was ShopRite. She now works directly for Shop- Rite, training staff at multiple locations.