Volleyball team stops for a “spin” at On the Fly

The Haldane varsity volleyball team went for a “spin” at On The Fly Cycling and Fitness Studio on Route 9 this week as it prepared for its season opener in Mahopac on Sept. 6.

Studio owner Joy Albrecht offered Haldane student-athletes a free workout and said she was “thrilled” when the entire volleyball squad showed up for a cycling session at 7 a.m. on Aug. 30. Coach Kelsey Flaherty said she has high hopes for the team, which moved up a notch to Class C competition this year. Flaherty said the team’s goal is to make to the state finals. The 2016 team includes four seniors and is led by Brooke Vahos and Sophia Carnibuci. 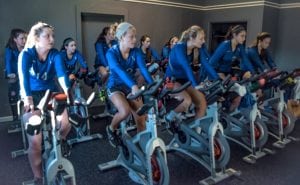