Could Beacon support its own currency?

Don’t be confused if the next time you’re at a coffee shop you overhear a customer ask the barista if he “takes Currents.”

They’re not talking about this newspaper but a monetary system known as Hudson Valley Current. Created three years ago in Rosendale, Currents are now accepted by more than 200 businesses, services and sole proprietors in Dutchess and Ulster counties. Organizers have begun to make their pitch in Beacon, where the money is accepted for payment at Ortner Graphics and the Beahive. It was there on Sept. 29 that co-founder Chris Hewitt shared how it works. 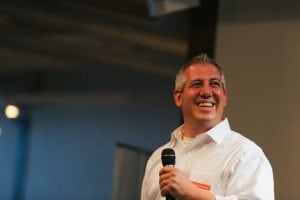 Hewitt, publisher of Country Wisdom News, said the Current is not meant to replace the dollar. “Dollars are important for things like savings, college and vacations,” he said. Instead, its goals are to spur the local economy, strengthen communities, help businesses get started with interest-free lines of credit and encourage the creation of a more just economic system. “I also like it because it teaches people what money is and where it comes from,” he said.

Currents are not paper bills but entirely digital, like Bitcoins, although Hewitt says a paper version may happen eventually. He said he was inspired after attending a conference in 2006 at Bard College about local currencies and economies. He said it took years of research, development and raising grant money to design and implement the system, which is run as a non-profit.

Hewitt and his collaborators didn’t have to start from scratch, because the idea of local currencies operating within a national economy has been around awhile. During the Great Depression in the 1930s, towns and cities around the world experimented with printing money as the value of dollars and deutschmarks plummeted. The most famous of these currencies was Switzerland’s WIR, created by small-business owners to give each other loans at a time when banks could not. The WIR is still used by more than 75,000 businesses, and trades the equivalent of billions in Swiss Francs every year. When the WIR was created, Swiss banks united to shut it down, but it is considered a stabilizing force on the Swiss franc. 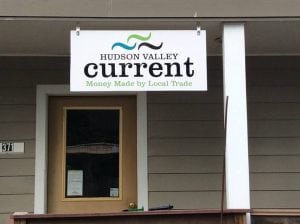 The offices of the Hudson Valley Current (photo provided)

By one count, there are more than 75 alternative currencies in the U.S. including at least four in the Northeast. For 20 years, the city of Ithaca printed a currency called Ithaca Hours, now a digital system called Ithacash. Glen Falls has Particle Notes. Residents of western Massachusetts use BerkShares, which organizers say keeps money in the community rather than sending it to the corporate headquarters of a national chain. Manchester, New Hampshire, has Shire Silver, which resemble credit cards but contain a small amount of gold or silver.

When a business enrolls in the Currents system, Hewitt or a colleague meets with the owners to match them with other vendors who use the system and to solicit ideas for businesses to recruit. For example, if a coffee shop tells Hewitt that a supplier is the coffee roaster two towns away, Hewitt said he will contact the roasters so that each business can trade the currency. Hewitt then asks the roaster for its main vendors, and so on.

“That’s why we call it Hudson Valley Currents,” he said. “Like a river, it’s stronger if it keeps flowing.”

The system is used by a variety of business-to-business services such as designers, bookkeepers and consultants but also increasingly by restaurants, farms, electricians and mechanics. A plumber in Kingston has done so much new business since he began accepting Currents that he’s now working with Hewitt to develop a system encouraging people to donate to charities. For example, a food bank could accept Currents and use them to purchase produce from farms and CSAs.

“He really wanted to find a way to give back to the community that has helped his business grow, so this is going to be his way to do that,” Hewitt said. 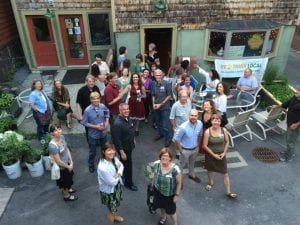 Hewitt has spoken with Kingston about accepting Currents to pay parking tickets, and both Dutchess and Ulster County executives have expressed interest in the program. Hewitt would like to expand the program throughout the Hudson Valley but for now it is limited to how many people Hewitt can meet with. Naturally, he said, people have questions.

“I’m trying to sign up a restaurant where I live,” he said. “And the owner told me, ‘It’s a great idea Chris, but what if 95 percent of my customers start paying in Currents?’ And I said, ‘I dream of that day. Because that means that everyone in our community has Currents to spend. Which means that you’d have plenty of places to spend those Currents you’re getting paid in.’”

In time, Hewitt would like the system to work with other local currencies. Tom Eberhardt-Smith, who accepts Currents at the design firm he runs with his wife in Kingston, likes that idea. “Local economies need to connect with each other to really grow,” he said. “I know it sounds paradoxical — a globalized local economy — but globalization is not inherently harmful to an economy; it’s just the way that globalization has been done that has negatively affected local economies and therefore has a bad reputation.”

For more information on Currents, including a list of businesses that accept them, visit hvcurrent.org.