Story could lead to intense cravings, loss of concentration

Is chocolate the stuff your dreams are made of? If so, The Chocolate Expo could make them come true. Scheduled for Sunday, Oct. 30, at the Mid-Hudson Civic Center in Poughkeepsie, the event will include goodies produced by artisanal chocolatiers, old-fashioned candy shops, farms, bakeries, specialty food producers, wineries, distilleries and cider brewers.

Last year’s expo at the Motorcyclepedia Museum in Newburgh — the first in the Hudson Valley — drew more than 6,100 people. 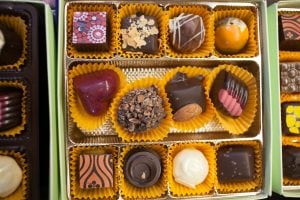 Chocolates on display at The Chocolate Expo (Photo by Chuck Fishman)

Don’t expect to lug home Halloween bags overflowing with samples. Instead, the expo is designed for people who are serious about, or at least are aficionados of, chocolate. Expo founder Marvin Baum describes the atmosphere as akin to a wine tasting, with vendors offering tasting portions. Talking to the purveyor is part of the attraction and, if after tasting something you like, you can purchase the product on the spot.

Many Hudson Valley vendors will take part, including More Good of Beacon (which will be selling chocolate soda and vegan egg creams), Hudson Valley Chocolates of Cornwall, Yankee Folly Cidery of New Paltz, Wild Coyote Hot Sauces of Glenham, and Oliver Kita Chocolates of Rhinebeck. Kita will present a talk on “the romance of cacao.”

For those with dietary restrictions, many vendors sell organic, vegan, salt-free, kosher, gluten-free and no-added-sugar products.

Baum launched The Chocolate Expo in a roundabout way. He had no experience in either the food or event industries but wanted to celebrate the 35th anniversary of the Woodstock music festival.

Working with the New York State Museum, he organized a museum exhibit, but when he discovered the state had not budgeted any funds for an opening reception, he reached out to wineries, breweries, cheese makers and specialty food producers. After the successful event, Baum switched the focus of his company from digital technology to event production. 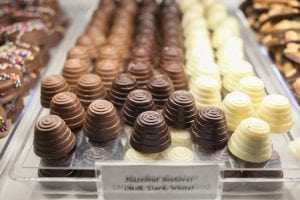 The Chocolate Expo runs from 10 a.m. to 7 p.m. Expect crowds, particularly during the first few hours. Tickets are $15 for adults and $10 for children ages 5 to 11 if purchased online; admission at the door is $20 per adult and $15 per child. Children under 5 are free. Tickets purchased online for admission during the expo’s final two hours are $10 each. For more information, visit thechocolateexpo.com. The expo will also be held Nov. 13 at the New Jersey Exposition Center in Edison and Dec. 11 at the Cradle of Aviation Museum on Long Island.