The Philipstown Boys U14 Warriors played their last game of the season at home against the Goshen Royals on Sunday. Despite facing chilling winds, blasts of snow, freezing rain, and impossible odds, the Warriors played their hardest.  During the first quarter of the game, goalie Graeme McGrath blocked numerous shots from entering the net by throwing his whole body in front of the ball. The defensive line, comprised of Luca Van Dommele, Paolo Coumans, Owen Edelson, and Jack Gordineer, held the Royals back and were able to send the ball up the field to Christian Moreno and Daniel Carlos. The pair showed great teamwork, passing the ball back and forth, moving it towards the net but strikers Zachary Cannova and Gus Grossman weren’t able to land it in the net.

The Royals broke through the defense midway into the first half and quickly racked up six goals by the halftime whistle. When the game resumed, Gordineer manned the goal and made a number of impressive saves while McGrath, Senan Scott-Hamblen, and Charlie Keegan joined the defense with August Lee, John Weatherup, and Gael Frezza coming on strong in the midfield. Weatherup took a shot on goal which was quickly followed up by Carlos scoring the Warriors’ only goal of the game. After the Royals brought in two more goals, the game was called due to the worsening weather. The final score was 8-1 in favor of the Royals.

Late afternoon on Sunday, the Philipstown Boys U13 Arsenal travel soccer team traveled to Montgomery, NY to play the Orange County Eagles. The weather was a challenge as the young Gunners and their opponents faced freezing rain, biting wind, and frigid temperatures for the game’s entirety, but Philipstown was able to come out on top 2-0 against the tough Eagles team.

The first goal was an example of many scored by Arsenal this season, where three or four crisp instep passes allowed the team to quickly transition from defense though the midfield and up to their forwards. 22 minutes into the first half, Patrick DiNardo stopped the ball at midfield and distributed to Chase Mayer. Mayer flicked the ball backwards to teammate Ryan Eng-Wong who received the ball on the run and blasted it into the upper left corner.

The second goal came 15 minutes into the second half when Evan Maasik picked the ball up 40 yards from the goal, dribbled 20 yards and then passed a nice through ball to Colin August, who deserves credit for a brilliant parallel run at a slight angle to provide a good passing lane.  August took one touch with a defender close to him and hit a skillful ball from about 12 yards out into the bottom right corner.

Kudos once again goes to the stalwart Philipstown defense of goalkeepers, Urbanak and Mayer, and the Philipstown backfield of DiNardo, Rowen Kuzminski, Aidan Sullivan-Hoch and David Tacuri, who battled the icy conditions and the tough Eagle offense to shut out their fifth opponent of the season – the final score was Philipstown 2, Orange County 0. The division-leading defense allowed only six goals over ten games this season, boasting one of the top “Goals Against” stats in the entire league. Congratulations to the U13 Arsenal team for finishing their season with an impressive 9-1 record.

The Philipstown Boys U11 Strikers closed out a banner season with a nail biter of a game against the Cortlandt Spirit on Sunday morning at Philipstown Park. Battling frigid temperatures and windy conditions, the boys fought tooth and nail and pulled out the “W” in the final minutes. Throughout most of the game, the teams were well-matched with skills, footwork, and speed. The Spirit snuck one goal in early in the game against Philipstown goalkeeper, Jeremy Hall, who subbed in for Ronan Kiter. 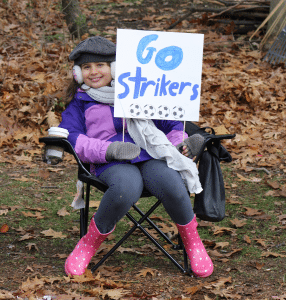 Melanie Delabie cheers her brother Colin from the sidelines in the U11 Strikers 2-1 win against the Cortlandt Spirit in a Philipstown Soccer Club match on Nov. 20 (Photo by Patrice Delabie)

The Strikers fought back, supporting their keeper for the remainder of the half. Hall followed up with a number of saves, and helped to get the ball back into offensive territory, along with defenders Luca DiLello and Vlad Saban, who had a stellar game. Max Westphal took advantage of an opportunity midway through the first half and lobbed the ball towards Cortlandt’s goalie, who missed the catch, earning the Strikers their first goal, making the score 1-1 going into the half.

The Strikers came alive immediately into the second half, and defensive and offensive players worked together against the young Spirit team, who was playing equally tough. Midfielder, Frankie DiGiglio’s fast feet and agility helped move the ball away from opponents and both he and Colin Delabie used their full bodies to control the ball down the field. Goalie, Liam Gaugler made several beautiful saves, letting no ball go past his hands for the entire half. At one point forward Trajan McCarthy lost his cleat, and instead of stopping the game he continued through the play and made a beautiful pass. Jake Powers’ contributions on offense were tremendous, as he worked to move the ball along the sidelines. 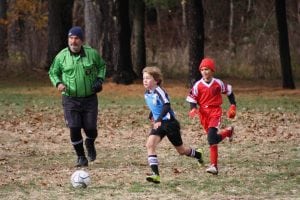 Max Westphal of the U11 Strikers outruns a Cortlandt opponent. (Photo by Patrice Delabie)

But it was Jake Thomas, who launched a massive shot from almost halfway across the field, sending the ball into the net, bringing the score to 2-1 in the final minutes of the game. It was arguably the highlight of the young player’s season.

The young Strikers worked hard this season to improve their speed and their footwork, and coaches, Danielle Pack McCarthy and Kristina DiGiglio, worked with each individual player to draw out their strengths. Pack McCarthy pushed players out of their comfort zone, rotating the boys into different positions throughout the season.

When asked about the strategy, Pack McCarthy responded, “Since we first started the season, every single player stepped up and didn’t complain.” She added, “Sometimes you hear there’s one superstar that can really carry a team – but these guys are all superstars. Everyone played positions they didn’t want to be in, some played defense when they were more comfortable on offense. They were all selfless and supported each other. They were just so happy to be winning, and taking them out of their comfort zones really helped them to achieve such a successful season.”

Congratulations to the Philipstown Strikers who finished their season undefeated at the top of their division with an outstanding 10-0 record.

The Force Finishes in Style with a 6-0 Victory

The Philipstown Boys U9 Force entered their final game of the season against the Eastern Pike Strikers with a 3-3-3 record. They were hungry for the chance to push the win column ahead and it showed in their play. Roth Westphal continued to show that he is a special player as he opened the game with not one, not two but three goals before Eastern Pike could even get on the board. For Westphal it was his third hat trick of the season and unlike last week’s 3-2 victory, this time he had some company on the scoring sheet.

Magnus DuBois was the first to add to the scoring when he took a pass at the top of the box and drilled home a shot into the top left corner of the net. Next up was Owen Powers who used his unrivaled speed to beat opposing defenders to a loose ball and then cruised the final eighth of the field before he deftly tapped it past the goalkeeper’s outstretched arms. The last goal went to Lincoln McCarthy who battled up top all day and was finally rewarded as he moved around two defenders before chipping the ball over the goalie’s head.

The defense pitched a shutout thanks to an outstanding defensive performance from goalie George Stubbs, center defender Owen Sullivan-Hoch, right defender Lucky Bell and left defender Bryce O’Halloran. At midfield Diego DiGiglio and Anthony Bailey helped move the ball from the stellar defense to the high-powered offense. The result from the effort was a big 6-0 win, a 4-3-3 record and an amazing start for this young team. Coaches Danielle Pack McCarthy and Dirk Westphal couldn’t have been prouder of this team and everyone is looking forward to watching their bright future unfold.

With the snow falling and third place in the division on the line, the Philipstown Girls U13 Raptors finished off their fall season with a commanding 4-0 victory over the visiting Washingtonville Lightning squad, avenging an earlier Philipstown short-handed defeat.  The Raptors went 2-1-1 in their second time through the division despite having played with no substitutes in three of the games and only nine players in one.

The Raptors controlled the game from start to finish with its defense again leading the way, and keeping the ball in the Raptor half of the field.  Led by goalie, Dosi Weed, who recorded her third shutout in six games, the Raptors defense allowed the Lightning few opportunities. Defenders Mazzie Maxwell, Sophia Scanga, Maya Osborn, Eden Feinstein, and Camille Maglio won most 50-50 balls, and kept the day quiet for Weed who showed great hands and soccer know-how in corralling loose balls in the box.

The Raptors’ scoring was once again led by midfielder Brynn Martin, who recorded her second straight hat trick, benefitting from two crossing assists by Raptor forward Emilia Osborn. Martin’s second goal came unassisted in a scramble in the box that ended with her slide-kicking the ball by the fast-approaching Lightning goalie—a great soccer play that gave the Raptors a 2-0 halftime lead.

The second half saw a Lightning team revitalized by having the wind at their backs, but Raptor midfielders Zoe Harris, Ella Ashburn, and Maia Keller were up to the task, disrupting the Washingtonville flow, and continuing to feed their forwards.  Raptor forward Bianca Harmancin threatened twice, but hit the post. Then, despite Washingtonville’s goalie making two strong saves, the Raptors broke through with two goals in quick succession – the first by defender Maya Osborn, who sent a ball from 30-yards-out over the extended Washingtonville goalie – and the second by midfielder Martin, who deposited an Emilia Osborn cross in the back of the Washingtonville net for the game’s final tally.

With the goal, Martin became the division’s second leading scorer, followed by Harmancin and Emilia Osborn, who were the division’s third and fourth leading scorers, respectively, this fall. With the 4-0 victory, Philipstown grabbed a third place finish in this upper G13 Division and continued to show that Haldane High School has a bright future in women’s soccer.