A wish came true in Beacon on Dec. 23 for an 11-year-old from Florida who may be the most dedicated fan of the British television series Dr. Who in the universe.

The Hudson Valley chapter of the Make-a-Wish Foundation brought Collin Cash, who is in remission from Burkitt’s lymphoma B-cell leukemia, to the Pandorica Restaurant for a Dr. Who-themed party complete with live characters played by other fans. The Doctor himself showed up in various incarnations, along with his nemeses.

Collin, who lives in Port St. Lucie, had his sights set on a trip to the U.K. to visit the Dr. Who Experience, an attraction in Cardiff, Wales, but his family thought an overseas trip might be pushing it. Collin then read about Pandorica, a themed restaurant at 165 Main St. that is devoted to the show. The South Florida chapter of Make-a-Wish, one of 62 in the U.S., contacted Megan Laurelli, wish coordinator for the Hudson Valley chapter, who got in touch with Shirley Hot, the restaurant’s owner. 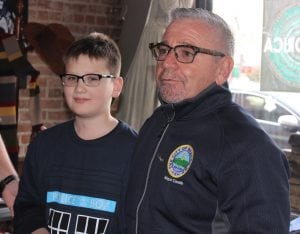 “First I cried,” Hot recalled, after hearing about Collin’s condition and his wish. “Then I started thinking that for a kid coming from Florida, just coming to Pandorica is not enough.” She reached out to her regulars, including members of a newly formed Dr. Who Club in Connecticut that already has more than 200 members, and asked for help. “There are people here from Massachusetts, New Jersey and Long Island — generous spirits,” she said.

Hot also called a number of Beacon stores, including Clutter, Play, Dream in Plastic and Notions and Potions, that donated games and coloring books. Soon after, the Dutchess County Legislature declared Dec. 23 to be “Collin’s Dr. Who Day.”

Collin was diagnosed in July 2015 and underwent six months of chemotherapy to battle the cancer, which originates in the cells of the immune system. Ninety percent of children are cured, and Collin has been in remission for a year. (Make-a-Wish notes that while the children it serves have life-threatening conditions, it isn’t providing “last wishes.” The Hudson Valley chapter, which is based in Tarrytown and handles requests in Dutchess, Putnam and six other counties, typically has about 110 requests in progress.) 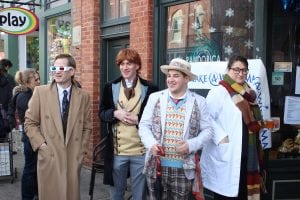 The Dr. Who gang which waited outside of Pandorica was just as excited to meet Make-a-Wish kid Collin as he was to see them. (Photo by A. Rooney)

On the big day, Pandorica was decked out with Whovian accessories, including a buffet with Dr. Who favorites such as fish fingers and custard. An hour before Collin arrived, Pandorica was packed with “cosplayers,” fans almost as dedicated as Collin, draped in both costume and attitude.

There were almost as many Dr. Who players as there have been actors in the ever-changing show, which first aired in 1963, ran through 1989, and was revived in 2005. Dr. Who is a spacefaring and time-travelling humanoid alien who, accompanied by companions, combats a variety of foes while saving civilizations and helping those in need.

Twelve actors have headlined the series, each taking over after the previous Dr. Who suffers a severe injury that requires him to regenerate into a new body and being — a device which was invented upon the departure of the first actor.

Dustin Hausner, an early arrival to Collin’s party, came as the seventh Dr. Who, resplendent in a boater hat, plaid pants, white jacket and, most crucial, a vest with a question mark pattern and an umbrella with a similar handle. Hausner, a graduate student at Columbia studying negotiation and conflict resolution, described No. 7 as “very mysterious. My theory is that he is happy, yes, but he also has a bit of sadness about him.” 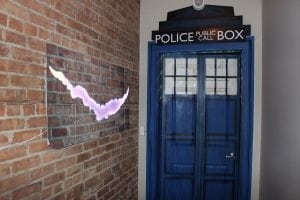 A simulated “crack in the universe” designed by Joel Goss in a hallway at Pandorica. The TARDIS door leads to the bathroom. (Photo by A. Rooney)

Hausner said that many of the cosplayers know each other from science-fiction conventions and other events. “We’re all here for the opportunity to help a kid have some fun,” he said. Patrick Fenton, depicting No. 8, likewise said he came “to make someone’s day.”

Into each hero’s life, villains must enter. Pandorica had two. Tom Hoppe, who portrayed Cyberman, who looked like the Tin Man crossed with something meaner, is a member of COS ‘N Effect, a group that provides characters for charities such as Make-a-Wish. Kara Sternquist was Missy, who insisted she was no everyday Dr. Who nemesis but, in fact, an arch-nemesis.

Each of these characters, along with others, lined up beside a “red carpet” entrance created with crowd-control barriers outside Pandorica as a white limousine containing Collin, his parents Jonathan and Jennifer, and his twin sister Kendall arrived. Collin seemed excited but not overly intimidated, greeting the smiling, applauding crowd, and shaking hands.   (The Cash family also visited New York City.) 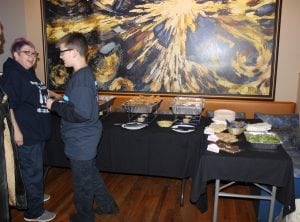 Pandorica owner Shirley Hot shows Colin the food offerings, including special fish fingers and custard, “enjoyed by Dr. Who 11 after his regeneration” according to those in the know. (Photo by A. Rooney)

The party began with a welcome from Beacon Mayor Randy Casale and proclamations from state Sen. Sue Serino and Dutchess County Executive Marc Molinaro, who joked about his own regeneration as a politician. Collin showed his own quick wit, and his parents watched with pride. (Jennifer Cash admitted she and her husband weren’t great Dr. Who fans. Kendall was, “a little,” she said, “but nothing like Collin.”)

After being presented with the goodies collected for him, which included a model of a TARDIS (a time-traveling spaceship disguised as a British police callbox), Hot showed Collin the buffet and provided a tour of the outer limits of Pandorica, including a bathroom door painted to resemble the TARDIS and a wall with a “crack in the universe.”