Haldane’s musical take on happily ever after (or not)

The Haldane Drama production of Stephen Sondheim’s Into the Woods opens on March 17 for three performances with a cast that includes Little Red Riding Hood, Rapunzel and assorted princes who live out their covetous and coveting lives without realizing the consequences of having their wishes and dreams come to fruition.

Sondheim’s most frequently produced show (it was presented by Haldane Drama in 2010, as well) is not designed for children; but those too young to comprehend all the goings-on will appreciate it in their own way. 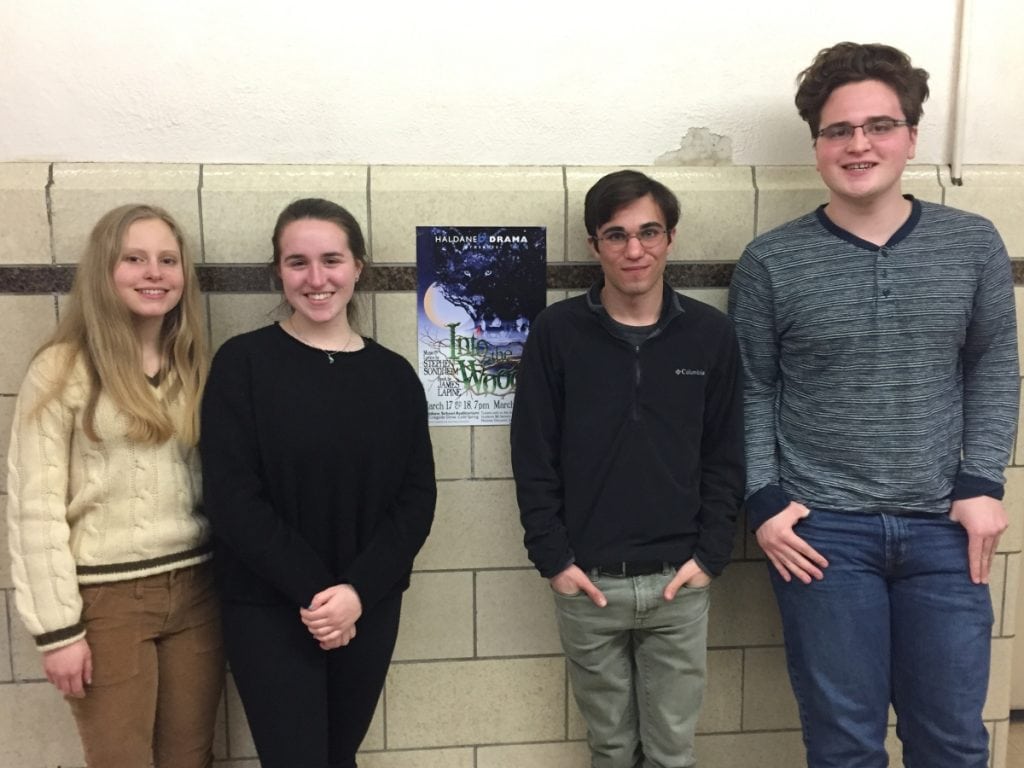 At Haldane, seniors Allie LaRocco, Harper Levy, Jeremy Roffman and Evan Schweikhart are the equivalent of all-season athletes when it comes to theatrical productions at the school and elsewhere in Philipstown. This will be their last Haldane show together as they portray Cinderella, the Witch, the Baker and Jack (of the Beanstalk) in an ever-more-complicated tale of the forest.

Are fairy tales meant to be both light and dark?
Roffman: German children’s fairy tales are dark and horrible. This is a combination.
Levy: The show explores important, relevant topics and doesn’t shy away from being serious.
Roffman: It’s still got magic, but it accepts the realities of real life. It breaks down what you think it’s going to be.
LaRocco: The second act plays on the light and fluffy, the archetypes.
Levy: Yeah, the second act is like “Just kidding — you know nothing!”
Schweikhart: You have no idea what’s going to happen but realize someone is always going through the same things.
LaRocco: People succumb.
Roffman: It gets much more real.
Levy: The point of going into the woods is not knowing what’s going to happen.

Did you build your characters from scratch or look at how they have been portrayed by others?
Schweikhart [who plays Jack]: I watched the original Broadway production and used that actor’s portrayal to get the emotional hook, so it’s been kind of a blend of both organic and using other people who have played the role.
Levy: With the Witch, there’s nothing I can pull from my own experience. With Meryl Streep and Bernadette Peters having played her, both with such incredible talent, I’ve studied what they have done and it will be a big mish-mash.
LaRocco: For Cinderella, there are universal emotions; we’ve all been distressed, ecstatic. If you get to the root of a situation, you can draw upon it.
Roffman: James Corden played the Baker in the movie. I loved watching his attitude as the character. But trying to imitate him didn’t work. The biggest influence has been my own reaction to unexpected things.

Does the story have resonance during uncertain times, and also for you as seniors, about to move on?
LaRocco: We’re in a unique situation. With previous presidents, we knew what to expect, but now we don’t know what to expect. So now we’re “in the woods.”
Levy: The song “Children Will Listen” is the complete truth: children will listen. They will follow who they look up to.
Roffman: I don’t think we expected this dramatic of a time, but that speaks to the nature of this show. It’s not all going to be OK, but we’re not alone in this mess of craziness.

This is the second Sondheim musical in a row for Haldane Drama. What’s the most challenging thing about his works?
Schweikhart: It’s all about the music, and it’s wordy. It’s a lot of memorizing to get it all right.
LaRocco: I like music to be orderly, so I’m like, “Why did he just switch to 14/8 when the emphasis could be…?” But once I began understanding why it’s imperfect and how dissonant chords can sound so beautiful, I got it.
Roffman: It’s so hard to find your note at the beginning of the song, but Sondheim has the most musical integrity, especially compared to most shows that high schools do.
Levy: The way he writes, you don’t have to take any artistic liberties to convey more. The point of view of the character comes across in the way he writes the music.
Roffman: His music isn’t all about showing off your range.
Levy: Just your emotional range!

Into the Woods, directed by Martha Mechalakos, will be presented Friday, March 17, and Saturday, March 18, at 7 p.m., and Sunday, March 19, at 2 p.m. Tickets can be purchased at the door and cost $15 for adults and $8 for students. Senior citizens are admitted free, as are children younger than 8 when accompanied by an adult to the Sunday matinee.

Into The Woods Cast