Poppy’s has closed, but burgers will continue

On the long list of things to blame on the 2016 election, you can add Paul Yeaple’s decision to close Poppy’s.

“I probably wouldn’t have sold this place if Hillary had won,” he said of his popular burger joint on Main Street in Beacon.

Like many things Yeaple says, what sounds like a joke hides a deeper truth. “I don’t trust Trump’s economic… well … anything,” he said. “No matter what he does, we’re going to end up in a bad economic moment. I thought it would be good to not be in anything right now.”

Yeaple closed Poppy’s in March after eight years in business, during which it helped kickstart the farm-to-table restaurant movement in the Highlands. Revenues were growing, he said, and he owned the building so rent was not a concern. But the difficulty of attracting and keeping reliable staff led him to do more of the work himself. 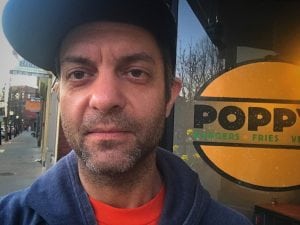 “It’s a physical and mental toll,” he said. “If I want this place to get better than it is right now, I have to stop at this location. I have to figure out how to rebuild this from the ground up so I can figure out what I’m doing wrong.”

The burgers will continue at 184 Main St., however, because Yeaple has sold the building to Brian Arnoff, the 29-year-old chef and owner of Kitchen Sink Food & Drink in Beacon, who in May plans to open a restaurant called Meyer’s Olde Dutch in the space that will offer a “casual, modern interpretation of the classic burger joint with a full-service bar.”

Yeaple’s sudden reset isn’t out of character. Ten years ago he left a job in Manhattan’s financial sector because, he said, he realized the people who succeeded in the industry were people he detested. He said it led him to wonder how he could succeed in a capitalist system without sacrificing his soul.

His epiphany came with ketchup and mustard.

Brian Arnoff, who opened Kitchen Sink Food & Drink in 2015, says Meyer’s Olde Dutch will offer not only beef burgers but lamb, chicken and vegan options, hand-cut fries, sweet potato fritters and salads through a counter service with open seating and a back patio. The restaurant is named for the former Olde Dutch Grocery in Middletown, which was owned and operated by his great-grandfather. Arnoff will offer take-out from the alley door starting Saturday, April 29.

“I realized I was willing to give someone all the money I had in my pockets if they would just make me a burger that didn’t come from one of those factories that PETA is always making videos about,” he said, referring to People for the Ethical Treatment of Animals. “I knew there were a lot of people around here who felt the same way.”

Yeaple took a job in the kitchen at Applewood in Brooklyn, which was doing farm-to-table before it became a thing.

“There was a farmer with a crappy van and filthy boots who would show up, drop a dead goat on the counter and drive off,” said Yeaple of the Park Slope restaurant, which closed in 2016 after 12 years. “They would make all these amazing meals out of the full animal. But it was fine dining. We can’t keep having snotty meals for rich people. This needs to be for everybody.” 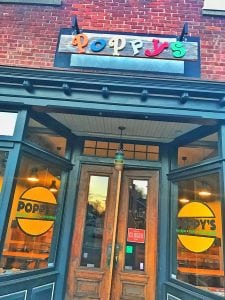 Yeaple decided to open a burger joint because it would be simple and accessible and not require a large number of ingredients, making it easier to source from a few local farms.

“Poppy’s has always been about not changing the wheel, just about changing how the wheel is made,” he said. “And if we do that, we can produce positive effects in terms of preserving open space, local farms, the treatment of animals, diet, health and the local economy.”

Poppy’s took off almost immediately, fueled in part by Yeaple’s success on the Food Network competition show Chopp’d against two seasoned chefs from high-end restaurants. Both insisted there was no way they could lose to a guy who runs a small-town burger joint.

That joint “was a simple place to go, get a good meal; it made you feel good, filled you up but didn’t make you feel like shit,” Yeaple said, when asked about its success. Plus, “it was right on Main Street so you could walk to it.”

With his profits from the sale of 184 Main, Yeaple said he is taking time to rethink his business model. He hopes to make it even simpler, with less overhead. He’s been checking out spaces in Newburgh, Poughkeepsie and Kingston but is also looking into a food truck operation or a pop-up restaurant that would operate for a week at a time. He hasn’t ruled out a return to Beacon.

“I love Beacon,” he said. “It’s perfectly laid out, like you built it in SimCity. I just don’t think my business model was ever going to work in that space.”