If you need evidence that music is the universal language, consider Maoz Ezra and Issa Boulos.

Ezra, an Israeli-born classical guitarist and founder of Brooklyn’s EzraGuitar school, was researching international composers online when he stumbled upon a profile of Boulos, a Palestinian-born composer who splits his time between Ramallah and Chicago.

Ezra was struck in particular by Boulos’ compositions for the oud, a Persian stringed instrument similar to a lute. He emailed Boulos and asked if he could adapt some of them for the guitar. That conversation led to a visit to Chicago and the two expats spending days talking about politics and their homelands.

“We didn’t have any disagreements, because we’re normal people,” said Ezra, who moved to Beacon with his family last year and opened a branch of EzraGuitar at 256 Fishkill Ave. Although Israel and the Palestinians are often in conflict, he said “the two of us can connect here in America and there’s no problem.” 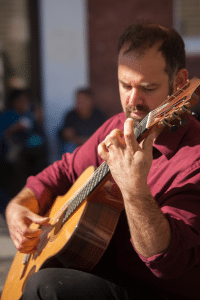 Ezra premiered his adaptations of Boulos’ work at Carnegie Hall. Now Boulos has written a piece specifically for Ezra and his wife, Leilah Dione Ezra, an opera singer who grew up in Monroe, which the couple will premiere at the Howland Cultural Center at 3 p.m. on Sunday, May 7.

Tickets for the performance, entitled Serenades of the Soul, are $15 and can be purchased at the door or at brownpapertickets.com. The concert will also feature pianist Laetitia Ruccolo and works by Ottorino Respighi, Bela Bartok, Joaquin Rodrigo and Daniel Akiva.

Boulos’ piece, entitled “Marrat Bina (Away from Home),” confronts the idea of what happens as an immigrant over the years slowly begins to forget his or her homeland. Its final lyrics are: “One day it all ended / With silence and distance / Until we stopped recognizing who we are.”

Ezra says he connected with the piece the first time he heard it. “I’m Israeli, he’s Palestinian, and we’re both away from home,” he said. “We’re still from the Middle East. We’re missing the same things.” 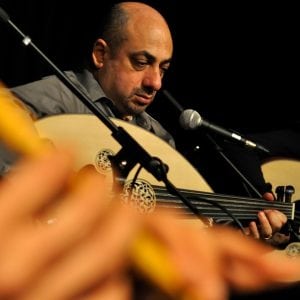 Leilah Ezra will sing the piece in Arabic, which she’s never done before. But she says as an opera singer she understands there’s a difference between being verbally and musically fluent in a language.

“With every language you have different sounds that bring forth a different kind of expression,” she says. “The language should never be a barrier.”

Added her husband: “There’s not enough representation of Palestinian culture here in America. Why not sing in Arabic?”

Like Boulos’ piece, other selections evoke bittersweet feelings of nostalgia for home, from the Italian countryside shadowed in twilight at the end of Respighi’s Deita Silvane to the royal Spanish gardens of Rodrigo’s Concierto de Aranjuez.

The globetrotting fits the Ezras well: Maoz left Israel when he was 24 to study guitar in Paris, where he met Leilah, then an opera student. They moved to Brooklyn to open the guitar school, which has about 300 students. Some of the 13-year-olds have been studying with Moaz Ezra since they were four. 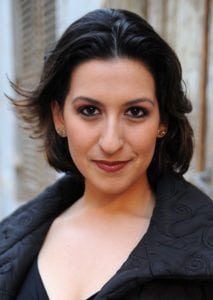 “It’s not about paying the bills,” he says. “I’ve been playing for more than 30 years, and the more I progress, the more I need to pass that progress on, because otherwise what’s the point?”

Ezra says that during the concert he will pay tribute to his new home by playing a guitar built in Beacon by John Vergara, the luthier at Lord of the Strings.

“We have lived in many places, but we’ve never lived in a place where people cared so much about the place they lived,” he says. “The amount of innovation here is incredible, and it’s contagious. When everyone cares about this place so much, you want to be part of it.”