Davis, a 2016 Beacon High School graduate and former indoor state champion in the long jump, set a University of Hartford record on April 22 with an outdoor leap of 7.25 meters at the UAlbany Spring Classic. More recently, the 5’8” freshman, who is studying architectural engineering, won the event at the Yale Springtime Invitational on April 30 with a jump of 6.99 meters. 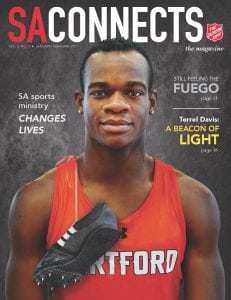 In January Davis was featured on the cover of SA Connects, the magazine of the Salvation Army. He and his mother, Cheryl, are both senior soldiers in the Beacon Corps.