Only one senior on boys’ team that finished 10-5

A year ago, the Beacon High School boys’ tennis team finished 13-3. But after its five top players graduated, including its best singles player and doubles team, Coach David Ryley didn’t know how this year’s squad would respond.

Juniors Matt Wyant and Russell Hecker moved up to No. 1 and No. 2 singles and junior James Cordero inherited No. 3. Ryley decided he would measure the success of the season not on wins but on the progress of his young roster — including eighth-grader Jack Padoleski — and how quickly players adjusted to their new roles. 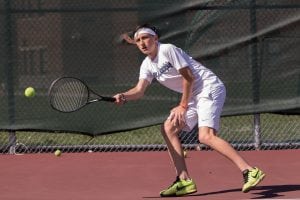 “My goals were to improve throughout the season and play every team we play tougher the second time around,” he said.

The team got off to a slow start, winning only one match of their first four, including a 6-1 loss to perennial league powerhouse Hendrick Hudson. But the Bulldogs defeated Sleepy Hollow on April 20, with juniors Mason Burch and Kellen Sela playing well as No. 1 doubles. Wyant and the doubles team of junior Mark Padoleski and senior Peter Ostrow pulled off super tie-break wins.

The Bulldogs evened their record at 3-3 the next day with a victory over Lakeland. Cordero came back after being down in the first set to win and Beacon swept its four doubles matches.

Beacon took down Lourdes at home on April 24 with two thrilling doubles victories, including Sela’s get on an overhead smash with Lourdes having match point and a rally in doubles by junior Jack Sheehy and sophomore Ethan Hull. They won five straight in the second set after being down 3-1.

On April 27, Beacon swept a doubleheader against Walter Panas, with freshman Christian Pillcurima making his No. 3 singles debut (from No. 4 doubles) and going 2-0. 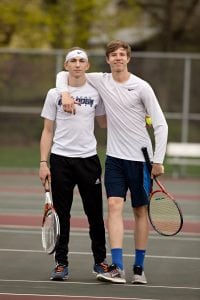 On May 2, Pillcurima again played well  against Lakeland, moving up to No. 2 and winning 10-7 in a super tie-breaker after dropping the second set 6-1.

Beacon swept Brewster in a doubleheader finale on May 9. Pillcurima was the sole singles winner. (He lost one of the two matches to finish 7-1 on the year) But the Bulldogs swept all eight doubles matches to win 4-3 and 5-2.

The team played its best tennis as the season wore on, Coach Ryley said. “In a rebuilding year, we are thrilled to finish 10-5.”