Twenty-five Philipstown residents lost their lives during 20th-century wars. Their names are engraved on a monument at the corner of Main and Chestnut streets in Cold Spring. 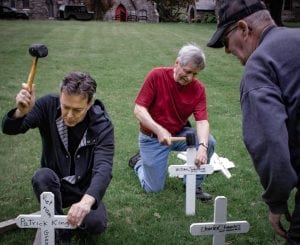 Father Shane Scott-Hamblen of St. Mary’s-in-the-Highlands, Jack Dickerhof and Chip Kniffen place wooden crosses on the lawn of the church in preparation for Memorial Day. The work, which began May 22, is completed over several days. (Photo by Anita Peltonen)