Matt Kane hopes to direct a brisk new breeze into the sails of Building Bridges Building Boats this summer. The nonprofit camp, in its 16th year, provides Philipstown-area teenagers with a hands-on Hudson River experience while teaching life and water skills.

Kane, 42, will take the helm in July. The camp’s founder and longtime executive director, David Hardy, will assist but is scaling back.

Although the camp until several years ago involved building boats – hence its name – it now focuses on getting students on the water. At the heart of each camp are two 26-foot “gig boats,” which have been part of the program since its inception and . Their history dates back at least 200 years.

“Gigs used to row out to ships coming into a harbor,” Kane explains. “The first boat to get there got the contract to unload.” 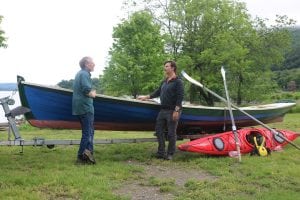 David Hardy and Matt Kane at Dockside Park in Cold Spring with a gig boat used during the camp (Photo by M. Turton)

Today gigs are well suited to the camp because they offer stability whether being rowed or sailed. “They’re a floating classroom,” Kane says, where campers learn basic seamanship from navigation and knots to reading the weather, tides, currents and rescue. The camp also teaches judgment and leadership skills, he says.

The 12 campers in each of three week-long sessions are given the tools and assigned to solve problems. “That’s where the learning happens, by letting them do, touch and feel,” Kane says. This year participants will plan an overnight trip on the river, likely as part of the third and final camp, and Kane plans to introduce outrigger canoes, also known as “dragon boats,” to the program. He hopes to spread the camp’s influence up and down the river.

Kane has plenty of experience on the river. He spent eight years sailing at Shelter Island on Long Island, launched the Rye Nature Center’s Paddle Adventure Camp and is certified as an advanced kayaking instructor and Wilderness Emergency Medical Technician. He also assists with the West Point Ski Patrol and is a member of the Cold Spring Fire Company and trained in rope rescues.

The camps, which take place the weeks of July 10, July 17 and July 24 and are based at Dockside Park in Cold Spring, are open to students entering sixth through 12th grades. The fee is $325 per week, and the registration deadline is July 1. See buildingboats.org or call 845-265-4290.