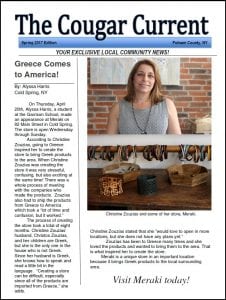 The fourth- and fifth-grade classes at Garrison School on June 19 published the classes’ annual newspaper, The Cougar Current (the school mascot is a cougar), which was printed with a grant from the Garrison Children’s Education Fund. Select articles are reprinted below.

The School Birds Are Chirping!

During the time before the band concert, people could get some refreshments that were being sold. “The spring concert is like a celebration because it shows how hard the students have been working,” said Ulysses Torres, the music teacher.

As mentioned before, the students had practiced and practiced for the spring concert, especially the trumpets, for they had a whole solo to do. They also had been going to extra lessons for practicing band.

These spring concerts have been going on for many years. Soon, the school has done these concerts while it still stands. There are also winter concerts, but only in winter. Many people come for entertainment, others for surprise by how good they are. These concerts will keep going for many years to come. 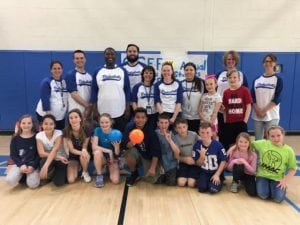 Mrs. Kuchera, third-grade teacher, was the person who organized the whole game and helped teachers purchase T-shirts just for the game. Mr. Beckley, gym teacher, was the referee of the game. Overall, the dodgeball game was a huge success at the Garrison School.

On April 27, Chase interviewed Mr. Young about the art show. “This is my 12th time doing the art show,” Mr. Young says. He will be selling the artwork for anywhere between $150 and $800.

The art show will be at the Catalyst Gallery in Beacon. Some of the items at the show will include robots that can probably move and there will also be landscapes. Chase asked Mr. Young, “Is the art show going to be around the world?’’ Mr. Young said, “No,” which is what Chase thought. Chase says, “See you there!”

On March 27, at Garrison School, there was a blackout. The power went out because lightning struck an electrical wire which caused a fire. Then the students of Garrison got off the bus. After the fire was over, the power was still off. 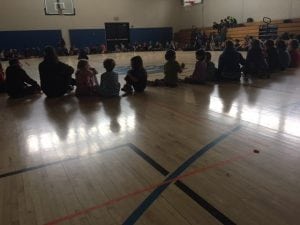 One of the students, Joey Carlos, said, “The entire school played duck, duck goose.’’ They played for a while until the power came back on. According to Joey, “It was a two-hour delay and then after the power went back on, it was a regular day.”

The Five-Story Building in Midtown

ASC Remodeling and Carpentry Inc., a local company serving Putnam Valley, is going to work on one of the biggest buildings they have ever done. It is in Midtown, New York. Frederico Carlos said, “It will take about 10 months.”

Also ASC Remodeling and Carpentry work together. In addition, it is historical. They will be adding an elevator and a piece of turf. The building is five stories high and on the fifth floor there are master bedrooms. Two of Joey Carlos’ uncles are carpenters and he also said he worked with Acacia, the owner of ASC Carpentry, Inc. ASC stands for Acacio Silver Carlos.

Most farms are huge with crops and animals, but this one with only 200 chickens and three sheep, can be called small. Tag has worked here since August 2016 and is the only farmhand currently.

“This is where we would talk about maple syrup. We spent two months making maple syrup in the end of the winter and we will do that again next year. And perhaps, have a bigger operation,” says Tag.

The fifth-grade students at GUFS voted for their favorite hot lunch. Then one of them was asked what his thoughts of the results were.

Chicken tenders got the most votes and nachos and pizza were tied in second place. Fifth-grade student Mac Lake was interviewed. The first question was “Are you surprised by the results?”

Mac said “No, I thought chicken tenders would win.” Next, he was asked if he could add another food item to the menu, what it would be. He replied with “empanadas.”

Teriyaki chicken and baked ziti only got one vote.

Next there was a food survey for desserts. Everybody voted ICEEs, only ICEEs, nothing else!

The last question to Mac was, “Are you surprised everyone voted for ICEEs?” He said, “Nope, not at all.”

“I think that anything with cheese is popular,” said Kim. She was proven right when a fourth grader asked the fellow students what their favorite hot lunch is. From her answers below, you can tell that her hypothesis was accurate. Only 15 percent of the students like a hot lunch that doesn’t involve cheese.

Garrison School hot lunch began in the 1970s. Did you know that it takes two days to make hot lunch? On Monday, shop and prepare, on Tuesday, cook and serve.

A Garrison at Garrison
By Jillian August

How many Garrisons are there in Garrison? In Garrison, a teacher named Sarah Garrison is filling in for Debbie Earle while she is out recovering from shoulder surgery.

Miss Garrison ended up being a teacher in Garrison because she came home from Hawaii and wanted a teaching job. Then, she interviewed and became a teacher here in Garrison.

Jillian August, fourth-grade student, asked Merrick Williams, “Does Miss Garrison do any differently than Mrs. Earle?” Merrick said, “Yes, she does. My most favorite thing that she does differently is her handshakes” like the Hawaii sign. This is a hand signal that means, “I’m ready” in Miss Garrison language.

“Smart passes boys!” That is Nicholas Larosso, the head coach of the O’Neill boys’ lacrosse team.

Nicholas Larosso graduated from West Point men’s lacrosse team. He has coached two high school teams. He started playing lacrosse at the age of 11. He got his first lacrosse stick when he was 8 years old.

Nicholas Larosso says that the team is more confident, decisive, and more aggressive than last year.

Coach believes that the lacrosse team has had so much success because they have matured both physically and mentally.

The fourth- and fifth-grade of the Garrison Union Free School District did a fun competition. The competition was the same thing as March Madness in the NCAA. They did the exact same thing, except it wasn’t for basketball teams, it was for books. It was called Book Madness.

If you don’t know how it works, here it is. There are four rounds: Sweet Sixteen, Elite Eight, Final Four and the Championship game. Kids vote on Google Classroom for each matchup for the books and there are two books and the one with the most votes advances to the next round. The book Pax took down How to Steal a Dog in the championship.