Jessica Tudor of Garrison displays her first-place award in the Scotts Catch, Pitch and Hit competition held June 11 at Yankee Stadium. She won the softball competition among 7- and 8-year-old players and also had one of the top three scores in the nation for her age group and will next compete during the Major League Baseball All-Star festivities in Miami.

The players compete in three events: hitting off a tee, pitching to a strike zone and running from second base to home. 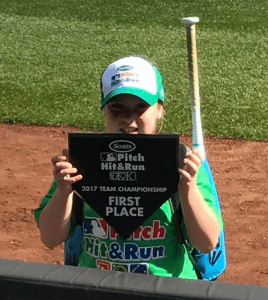