Benedict Arnold returns for the summer

The story of Benedict Arnold and his betrayal has been told so many times, and interpreted in so many ways, that John Duncan faced a daunting task when assigned to assemble an exhibit for the Putnam History Museum on the general’s time in the Highlands. The collection associate decided the best source would be an original one — the journal of Maj. John André, the British Army officer who was caught near Tarrytown with Arnold’s instructions for taking West Point hidden in his boot.

“It’s meticulous,” Duncan says of André’s account, which he recorded before being executed for spying. In comparing it with some visual depictions of the events, Duncan found “large discrepancies between what actually happened and what people think happened or remembered happening. Things start to become a little twisted, and you can see widely varied accounts which don’t match up with each other,” he says.

The items he chose for the exhibit, Treason! Benedict Arnold in the Hudson Highlands, which opened July 23, provide a geographic and personal backdrop for the story.

Anchored by a map dating from about 1783 that details what occurred between Newburgh, Garrison and Tarrytown, the exhibit includes documents, photographs, journal entries, etchings and weaponry related to the key players. 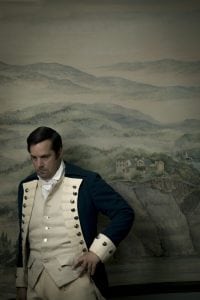 The Putnam History Museum exhibit is part of a larger Benedict Arnold summer in the Highlands. On Friday, Aug. 4, the Hudson Valley Shakespeare Festival will stage the first of 10 performances of Richard Nelson’s The General from America, which runs at Boscobel through Labor Day weekend. See hvshakespeare.org.

On Saturday, Aug. 5, at 5 p.m., historian Vernon Benjamin will speak at the museum about his play, Arnold and André: The Birth of the Romantic, which is based on a meeting between Arnold and the British officer in September 1780 on a hillside overlooking Haverstraw Bay. Admission is free for museum members or $5 otherwise.

Later in the month, beginning Sunday, Aug. 27, HVSF will host seven days of events it has dubbed the Week of Revolution. It includes a Community Day, on Aug. 28, with the Greater Newburgh Symphony Orchestra; a hike sponsored by the Hudson Highlands Land Trust with storyteller Jonathan Kruk along Arnold’s escape route; trivia nights about the American Revolution on Aug. 30 for teens and Sept. 1 for adults; and talks at the museum and Boscobel.

The week will conclude at the museum on Sunday, Sept. 3, with a panel of West Point scholars discussing Arnold’s role in the war, followed by a boat ride on the Hudson to Constitution Island.

Duncan says he was not surprised by the inconsistencies in the accounts of Arnold’s betrayal and André’s capture. Many of the paintings and engravings, he notes, were created in the mid-19th century, decades after the events took place and during the period before the U.S. Civil War.

“There was definitely an aspect of developing an early nationalism at that time, because America was fracturing again and this ‘story’ served to unify,” he says. “The artists were able to look back at this moment in history and use it for their own purposes, which we can see in some of this material. When this happened, with André caught and Arnold IDed as a huge turncoat, public opinion swayed and people became more behind the rebellion; it was a galvanizing moment. Politicians have long memories about what things are best used to unite people, so they invoke them.” 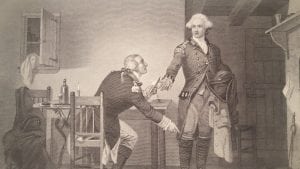 Treason of Arnold, a steel engraving by C.F. Blauvelt, for Johnson, Fry & Co., circa 1857. The accompanying text reads “Arnold persuades André to Conceal the Papers in His Boot.”

He pointed to two etchings from the 1850s that depict André’s capture by three men north of Tarrytown. “There are all sorts of different histories” about the men’s identifies, Duncan explains. They “were possibly a Continental Army-backed militia, but more likely just a group of ruffians known as ‘freelancers,’ ” he says. In one of the etchings, they are depicted wearing uniforms. “There is disagreement over what André was wearing, as he was convicted of ‘traveling out of uniform,’ ” a requirement to put him on trial as a spy, Duncan says.

One part of the exhibit focuses on Beverley Robinson, who lived along what is now Route 9D south of the Garrison School in a home that became Arnold’s headquarters. The house burned in 1892 but photos survive, and three — an exterior, an interior and one post-fire, with its three chimneys remaining — are shown. 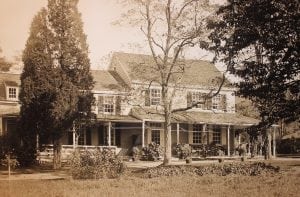 The Robinson house in the 1880s, before it burned (PHM)

Robinson, from Virginia, married Susanna Philipse, of the family that gave the area the name Philipstown, and became a major landowner. A Loyalist, he didn’t want to fight but was persuaded to join the British Army, given the rank of colonel and raised his own regiments. When Robinson joined the British Army, his land was seized and Arnold occupied the house. It was from there that Arnold fled to the British ship Vulture upon hearing of André’s capture.

Several residents loaned items for the exhibit, including a copy of André’s journal, a set of Revolutionary War-era bayonets from Cold Spring historian Mark Forlow and an etching from Christopher Radko.

The Putnam History Museum, at 63 Chestnut St. in Cold Spring, is open Wednesday through Sunday from 11 a.m. to 5 p.m. Members are admitted free; otherwise it’s $5 for adults and $2 for seniors and students. See putnamhistorymuseum.org or call 845-265-4010.