Melanie Leonard is the owner of WYNONO, a custom hatmaking shop she runs from her Beacon home. (The name is a Native American word meaning “first born” or “one of a kind.”) She spoke with Michael Turton about her craft. Her responses have been edited for brevity. 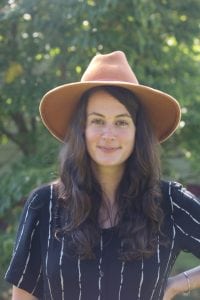 How did you get into making hats?
Four years ago a woman came into a bar where I worked in Brooklyn. She always wore amazing hats that she made herself. I became her apprentice. I also trained with Anya Caliendo, is  well known for her technique and flamboyant designs.

What kinds of hats do you make?
I do hats for men and women, a lot of straws and also felt and suede.

What are you most proud of?
I make everything by hand using classic millinery techniques. I don’t use machines. I do everything; produce everything, on my own. I’ve just kept making hats, almost like a mad woman. I’ve kept practicing and gotten a million times better.

Do you know where the expression “mad hatter” comes from?
Fumes from chemicals used as a stiffener for felt or suede in hat factories were dangerous. Workers went mad. I don’t use them much, and when I do, it’s always outside. 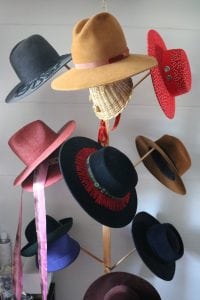 Do you like wearing hats yourself?
I do, although I can’t seem to find the perfect one.

What is the most difficult aspect of hat making?
It depends on the hat. But blocking, when you shape the hat, is critical. It’s difficult, labor-intensive and has to be fine-tuned. I also get nervous when hand sewing a brim. If you mess up the brim, it’s a wash.

How long does it take to make a fedora?
You have to block it overnight to get the form. After that I can do it in about five to six hours.

What’s the most unusual hat you’ve made?
I got some amazing choral-colored rabbit felt and made a cone-shaped crown with handmade pom-poms on the side. I didn’t know who the hell would wear it. I just made it! I needed a break from the usual. 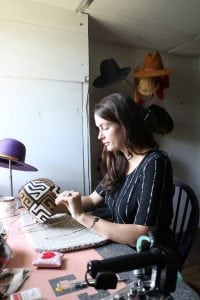 WYNONO is based in Leonard’s home in Beacon. (Photo by M. Turton)

Do you think hats are gaining or losing popularity?
They are coming back. Maybe it’s the desire to dress a little nicer. Often when people find “their hat,” they won’t leave their house without it.

What is the current trend?
Wide brims for women. For men it’s getting back to finding a beautiful fedora or Panama style.

What era would you like to live in, just for the hats?
That’s hard! Probably the 1960s and the pillbox era.

Do you have a favorite song that involves a hat?
The Temptations’ Papa Was a Rolling Stone and the line “Wherever he laid his hat was his home.”

Do you think about Beacon having been a leading hat-making city?
I wish the factories were still here. It’s cool that there’s resurgence in hat-making, a craftsman movement. There’s a woman in Hudson and another near Pawling also making hats. 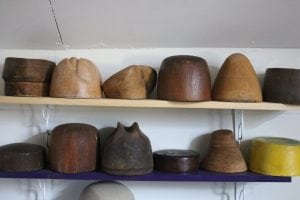 Do you have artifacts from Beacon’s hat-making days?
No, and my landlord was in charge of cleaning out the old hat factory. He threw out hundreds of hat blocks that are so hard to come by now.

Do you prefer creating your own designs?
I always want to go classic but end up a little funkier. I’m a sucker for color, strong shapes and higher crowns.

How do you sell your hats?
Initially it was custom-order, but the business has been growing since I moved here. I also sell at Flying Solo, a designer’s collective in Soho, and I have a website at wynono.com.

Is it coincidence or karma that Melanie and millinery sound alike?
When I was thinking of a name for my business we joked that it should be Mel’s something. I’m happy I didn’t go that route.

Is there a big lesson you’ve learned so far?
There’s a huge difference between what you want to make and what people will wear.