Haldane and Beacon open seasons at home on Sept. 2

The Haldane Blue Devils’ trip last season to the state semifinals may have seemed improbable after a 1-6 season but this season senior quarterback Brandon Twoguns is shooting for the Class D championship game.

“We want to prove we are a regional contender,” said Twoguns.

With a core of returning players, Haldane has a lot of experience in key positions. 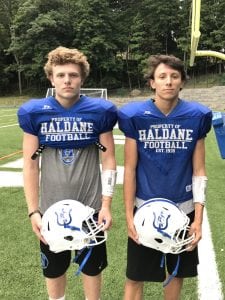 “They see the big picture and want to build on the excitement of last year,” said fourth-year head coach Ryan McConville. “We will take it one week at a time. It’s a long road against very good teams”.

For McConville, coaching Haldane football has been a homecoming. He grew up playing for the Philipstown Hawks, then starred at Haldane before playing four years at St. Lawrence University. 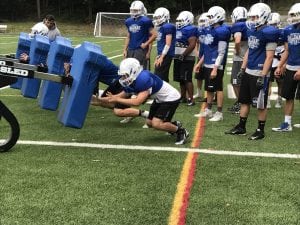 With only 24 players on the roster, most of the Blue Devils will play on both sides of the ball. “It puts a lot of responsibility on you to do your job correctly,” said Giachinta, who also plays linebacker.

Many coaches believe it’s the August practice days that determines if a season will be a success.

Weeks before school starts, in front of no one besides the occasional jogger on the school track, the Beacon Bulldogs worked to improve on last season’s four victories — later vacated for use of an ineligible player — and opening-round sectional defeat in the state tournament.

“The practices before the season are the most important,” says second-year head coach Tony Truscello. “You have to have numbers for competitive practices. You need more than the 25 players who suit up for a game.”

The Bulldogs open the season at home on Saturday, Sept. 2, against regional power John Jay. Its schedule also includes Brewster and the defending state Class A champions, Somers. 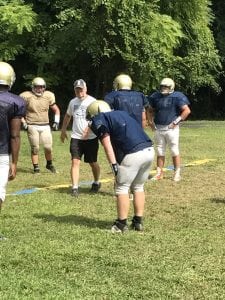 Coach Tony Truscello works with the offensive linemen during a Beacon practice. (Photo by L.A. Klein)

Senior Jaden Navarro, who played quarterback last season, will move to wide receiver and junior Joseph Decandia will take over at quarterback after playing the position on the modified and junior varsity teams. Junior running backs Manny Gardner and Willie Rivera will lead the ground attack.

The offensive line is mostly intact behind Trey Dinio, a team caption. It includes Qiantae Stephens, a transfer student from Atlanta. Senior captain Joe Sarcone and sophomore Angel Feliz will direct the defense as linebackers.

Truscello, who lives in Wallkill, has coached football for 40 years. During a practice on Aug. 28 he was standing in for the quarterback while he worked with the offensive line. The team was fresh off a three-team scrimmage at Marlboro.

The coach noted that one of the challenges Beacon and many other schools face is that athletes who in the past would play two or three sports now focus on one year-round. That can mean six or eight athletes who would contribute to the football team may not be on the field, having chosen to play only basketball, soccer, baseball, or another sport.

While participation is down at the varsity level, Truscello said he is encouraged by the turnout for the junior varsity and eighth-grade teams.