We gave photographer Sheila Williams a simple assignment: Take a shot of every pay phone in the Highlands. If it has a dial tone, all the better.

After following a number of leads, she found two — at Whistling Willie’s in Cold Spring and the Philipstown Recreation Center in Garrison, neither working — or three if you count the empty phone booth near the former Guinan’s at Garrison’s Landing. 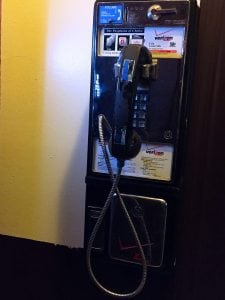 The pay phone at Whistling Willie’s in Cold Spring

According to the Federal Communications Commission, which still tracks such things, there are 20,716 working pay phones in New York state and 99,832 across the country. But Williams struck out in Beacon. She reported:

“The Post Office no longer has a pay phone out front. The employees I spoke with said it hasn’t been there for at least five years. A couple of locals said they had seen a pay phone at a cleaner on Route 52 in Carmel. I phoned a few but none had a pay phone. 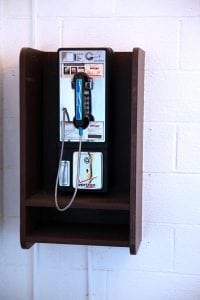 “The gas station in Beacon used to have two out front. They were removed when it was remodeled. The Yankee Diner used to have one but I was told it was taken out about four years ago because people never used it.

“According to a few people I spoke to, businesses have to pay to have pay phones and since people no longer use them it doesn’t make sense to have them. 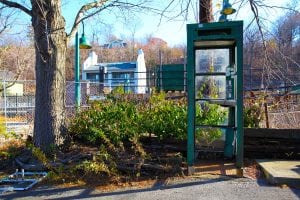 The phone booth at Guinan’s, since moved during remodeling of the building

“I also checked several locations from an online directory of pay phone numbers in Beacon and Philipstown. I even called a few antique stores in Cold Spring to see if maybe they sold old pay phones. No one did.”

Have you seen a phone? Let us know at [email protected] Or call us.