It’s been eight months since the opening of the Dutchess County Stabilization Center in Poughkeepsie, and they’re finally adding the finishing touches.

“We wanted to live in the space before we decorated it, but it’s not going to see much decorating,” says Beth Alter of the county’s Department of Behavioral and Community Health, who oversaw the project. “When you’re in withdrawal, the last thing you need to see is a lot of colors.”

Every last detail has been designed for the comfort of the people the staff refers to as its “guests”: cushy reclining chairs, healthy snacks, privacy screens, a chest filled with toys and puzzles for those who might arrive with children. 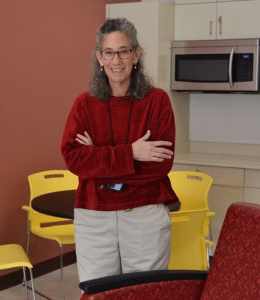 But there is a fine line between comfort and functionality, which is why the floors are smooth, cold and gleaming, without a scrap of carpet to be found. “It makes it easy to clean up puke,” Alter explains matter-of-factly.

Even the name of the building was carefully chosen. During the three years the center was under development, it was sometimes referred to as a “crisis center,” until County Executive Marc Molinaro suggested a different approach. Its purpose, he argued, is to divert people from places of crisis, such as jails and emergency rooms.

“We want people to feel like they have a place that they can go to before things hit the fan,” Alter says.

There’s no place in the state, and perhaps the U.S., quite like the Stabilization Center, which never closes and at which any Dutchess County resident, regardless of insurance or ability to pay, can receive immediate care, comfort and referrals. 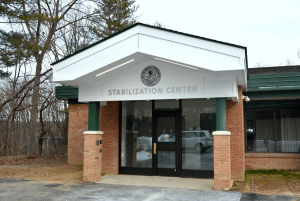 Over the last few years, Dutchess County (like many others) has moved on several fronts to address addiction and other mental-health issues. Every police officer in Dutchess has received or will receive Crisis Intervention Training to prepare them for encounters with addicts and the mentally ill. A 24-hour helpline (845-485-9700) that has been operating for 30 years can now be accessed by text and a phone app. Its staff also can send out a Mobile Crisis Intervention Team, created in 2012, to meet with people in person.

New York state so far likes what it sees in Poughkeepsie. On Aug. 29, its Office of Alcoholism and Substance Abuse Services (OASAS) put out a call for bids to open 24/7 walk-in treatment centers in every region of the state, offering up to $450,000 in development funding to county governments and nonprofits. The grants will be announced on Dec. 6.

(Although the Mid-Hudson is among the regions where OASAS hopes to establish more 24/7 centers, Putnam County is unlikely to have one any time soon, says Arlene Seymour, who runs the treatment program at the nonprofit CoveCare Center. “Putnam is a hard county because it’s divided in half” and because it lacks east-west public transportation, she says. “If we have something here in Carmel, would people in Philipstown be using it? They couldn’t if they’re strung out or sick. How are they going to get here?”)

The Dutchess Center came out of a desire to “better address what people actually need, instead of trying to make people’s needs fit into what we actually have,” says Alter. “The number of people with mental health issues in the jail kept climbing. The number of emergency-room visits in our hospitals kept climbing. And everywhere you go for help, the door always seems to say ‘Nope, sorry, wrong place to go.’

“We started talking about a ‘no wrong door’ place, where anyone can walk in and receive a whole array of services.”

The center was funded by the unanimous adoption in December 2015 by the Dutchess County Legislature of a $4.8 million bond, and construction began in early 2016. The county’s partners include MidHudson Regional Hospital (which has provided more than $100,000 in financial support and four full-time nurses, according to the county), Mid-Hudson Addiction Recovery Center, Astor Services for Children & Families and PEOPLe, a nonprofit that specializes in peer counseling. The center was dedicated to Dr. Kenneth Glatt, who retired in 2015 after serving for 35 years as the county’s commissioner of mental hygiene.

The closest precedent to the Dutchess Center is in San Antonio, where in 2002 the overcrowded Bexar County Jail needed another 1,000 beds. Local health officials observed that many inmates were there for low-level drug offenses or because of disturbances related to their mental illness. When released, these inmates often ended up back in jail or in the emergency room. 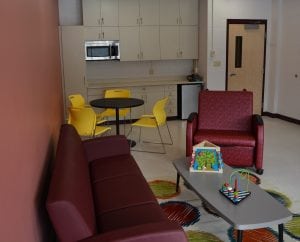 Instead of expanding the jail, police officers in the county received Crisis Intervention Training and Bexar partnered with the state to create a mental-health crisis center. This allowed officers to take low-level offenders somewhere besides jail. Today the county jail typically has 500 empty beds and mental-health related E.R. visits have fallen by 50 percent.

The Dutchess County Stabilization Center works the same way, allowing police officers to drop off people they encounter who they think would be better served by treatment than jail. Unlike the center in Texas, the Dutchess Center is voluntary. People can walk in, and leave, on their own.

“The Stabilization Center doesn’t present you with the opportunity to be absolved of criminal activity,” says Molinaro. “Our goal is to intervene at the right time to prevent criminal activity. We needed to have a place where we could de-escalate a situation, evaluate the individual and create the connection to ongoing care so that the individual gets the help he or she needs.”

In the process, “we’re diverting that person from a more expensive, less effective tool, which would be jail or the emergency room.”

The entrance to the center, located around the corner from the Mid-Hudson Regional Hospital, is in the back of the building. Tinted windows provide additional privacy. Alter says the only locked door is the first one, for security reasons.

Once inside, Alter says, the center staff tries to make a patient feel welcomed, safe and comfortable. If an addict is in withdrawal, he or she is already uncomfortable enough.

The first person to greet a visitor is a peer counselor — someone who understands what the patient is going through. The counselor explains what to expect and offers reassurance. The greeting room is small and ringed with lockers for visitors to park their belongings.

The next area contains bathrooms, showers and a laundry room. An initial consultation is performed, including a medical evaluation. The center is technically a non-medical, urgent-care facility — its staff does not give shots, so anyone in need of immediate medical assistance is redirected to a hospital. 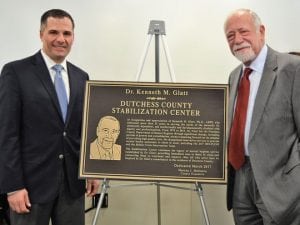 Visitors do not stay long. They are asked for the names of their “circle of support.” There are no beds. Legally, no one can remain for more than 24 hours, although the average stay is under four hours, Alter says. During their time at the center, visitors have four different communal rooms to choose from, depending on their condition, from the living room-esque Family Room with its kitchenette and warm lighting to the Sobering Room, which has nothing but the dimmest possible lighting and reclining chairs amply spaced apart from one another.

The center is only the first stop. For those battling addiction, the next one may be a referral to a long-term care facility. For those who are clean but fear relapsing, the peer counselor can provide connections with support groups and other community organizations.

“There are a lot of supports for young people who are working very hard to recover from opioid addiction,” says Alter. “It’s hard to imagine, because all we hear about every day are the overdoses. But the reality is that there are services that can be found if you’re looking.”

It’s the looking that can be the problem, especially to those suffering from withdrawal or mental illness.

Since it opened in February, the center has welcomed more than 1,000 guests. As of mid-August, 139 were brought by law enforcement, and the remainder came under their own volition. Some were suffering from withdrawal, and some were feeling uncomfortable in their own skin. Some were high.

Some were dealing with mental-health issues for the first time, Alter says, or didn’t like the way a new medication was making them feel and wanted to be observed. Some came to escape domestic abuse. Veterans suffering from PTSD walked through the door. Teenagers arrived who have been sent by Family Court.

“Sometimes people just come in because they’re frustrated and they don’t know what to do,” says Alter.

The center can assist up to 40 people within each 24-hour period and currently is seeing 12 to 15, Alter says. She says she expects those numbers to rise because those who need help “want to see if they can trust us. But this is one of those situations where if you build it, they will come. And they’re coming.”