The man who dared too much

In 1920, Harry McLaughlin had a meteoric rise, and fall, to fame.

Although he was known as “Tex,” he had little Texas background. Born in 1892 in Fishkill Landing (now Beacon), where his father, George McLaughlin, was a brakeman for the New England Railroad, Harry spent most of his younger years in Connecticut. He got the nickname from the relatively brief time he spent in San Antonio as an Army flight instructor during World War I.

Prior to the war Harry had been a gymnast and an instructor at a YMCA in Connecticut, and following a competition at Madison Square Garden in 1915 he was named one of the “most perfect of male specimens” in the country.

During his short time in San Antonio, Harry impressed Tex O’Reilly, an adventurer, soldier of fortune and writer of western novels, who was having two of his novels, Hollywood Ranch and West of the Rio Grande, made into silent films. Harry was chosen to play the lead in both, and he did his own stunts. 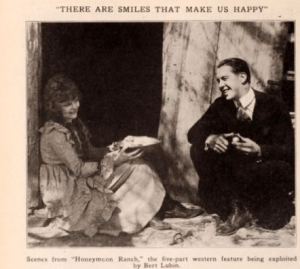 A scene from “Honeymoon Ranch” with Tex McLaughlin

When filming ended, Harry promoted himself as America’s most daring stuntman. He made national news by having his photo taken while doing a handstand on a chair on top of a Chicago skyscraper.

When Ormer Locklear, America’s foremost aviator stuntman, was killed during a movie shoot, Harry fulfilled Locklear’s contracts at state fairs. His airplane act was to hang by his knees from a rope ladder and jump to the wing of another plane. 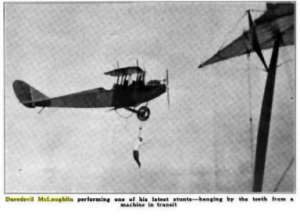 Daredevil McLaughlin hangs from a plane by his teeth (BHS)

On Sept. 18, 1920, at the New York State Fair in Syracuse, Tex was offered $1,000 to perform a stunt for 40,000 spectators. Harry climbed out on the wing of one plane and reached for the rope ladder attached to the fuselage of the plane flying overhead. He began to climb when a burst of wind blew him into the propeller of one plane.

Honeymoon Ranch opened that December to high praise for the Beacon boy’s stunts. He was also praised for his work in West of the Rio Grande, which opened in 1921.

Soon after Ralph Manning opened his auto supplies store at 500 Main St. in the mid-1920s, he capitalized on the latest rage — radio — by adding Atwater-Kent cabinets next to his line of auto batteries and tires. And on Aug. 31, 1939, Manning stocked the first television set for sale in Beacon. 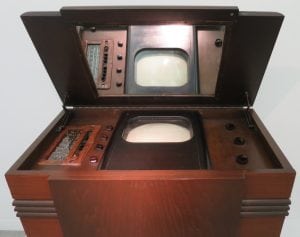 The set was a top-of-the-line RCA model (TRK-12) with a 5-by-12-inch tube capable of receiving five channels. It cost $600 at a time when a new car was $700. Television had broken into the airwaves only a few months earlier, on April 30, when RCA and the National Broadcasting Co. broadcast live the opening ceremony of the New York World’s Fair. Station W2XBS in New York broadcast several hours a day, five days a week, including sports, films, and live, hour-long dramas.

On a cold January morning in 1898, the pupils in Frances Nearing’s physiology class at Matteawan (Beacon) High School were quiet as mice, rapt in attention to the lesson at hand. Miss Nearing’s subject that day was the anatomy of a cat, and to that end she had brought in the lungs, heart and other feline innards for a show-and-tell exhibition of their workings. Coverage of the cat controversy

The class, which consisted of about 20 boys and girls who were ages 12 to 14 years, were mostly thrilled at the novelty of seeing a cat inside out. And, of course, most ran home afterward to tell their parents and let the cat out of the bag that Miss Nearing had dissected a tabby.

Gurdon Miller, the principal, resolutely defended Miss Nearing. But the school board passed a resolution of disapproval, stating that the practice is “more demoralizing than enlightening in its influence upon the children.” It also noted that any further dissections “will be considered sufficient for the dismissal of any teacher.”

Miller and Nearing both offered their resignations in protest. The New York newspapers published the gory details but the catty accusations eventually subsided and the educators returned to the school.

Until recently all that we knew about this photo of a man sitting at his office desk (below) was the date: March 1901, from the calendar on his desk. The mystery began to unravel with the identification via Google of Elsie Miles Smith of South Avenue in Fishkill Landing (Beacon). She was one of the city’s pioneer female inventors, having received a patent in the 1870s for her corset-stays (fasteners) with vulcanized rubber coating that prevented rusting from perspiration. Elsie sold her patent to a Michigan corset manufacturer for a tidy sum. A news article gave her name as Mrs. George C. Smith, and a search for George uncovered a record of his grave at Fishkill Rural Cemetery with a photo. The man in the long unidentified photo and the gravesite photo were dead ringers.

By 1901, George C. Smith, it turns out, was a superintendent at the New York Rubber Co. on Tioronda Avenue in Beacon, where he had been employed since the 1860s. He had risen over his 40 years there from bookkeeper to manager of the whole plant and its 250 employees. George died in 1907 and Elsie in 1925.

On the granite facade of the building at 139 Main St. are two panels in carved relief depicting a man’s arm holding a hammer. The arm and hammer were symbols of the strength of the financial institution located within, as well as representative of the corporation’s name, the Mechanics Savings Bank.

The building was constructed by the James Forrestal Co. in 1929 and opened for business on Feb. 1, 1930. The architect was A. Stanley Miller, who said he wanted it to be the most imposing building on Main. Its granite was quarried at Ausable Forks, New York. 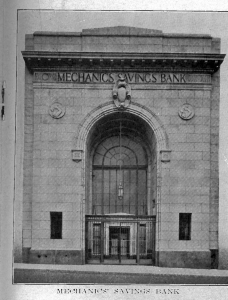 The main entrance featured a heavy bronze grill fitted with a swinging gate and bronze lantern. Inside, a visitor beheld a “sight of grandeur” (the architect’s words): the walls and floors were of Green Mountain marble and paneled walnut.

The name carved in bold lettering on the cornice was accurate for only five years. In 1935, the Matteawan Savings Bank and Mechanics Savings Bank merged to become the Beacon Savings Bank. In 1956, Beacon Savings moved out of 139 Main to 364 Main. Around that time the Star of Bethlehem Church at 22 N. Cedar, made the bold move to relocate to 139 Main, thus becoming the only church within a bank in Beacon.

With the help of a high-resolution scan and closeups, the Beacon Historical Society was able to piece together clues of when, where, what and who (we think) is in this old photo. 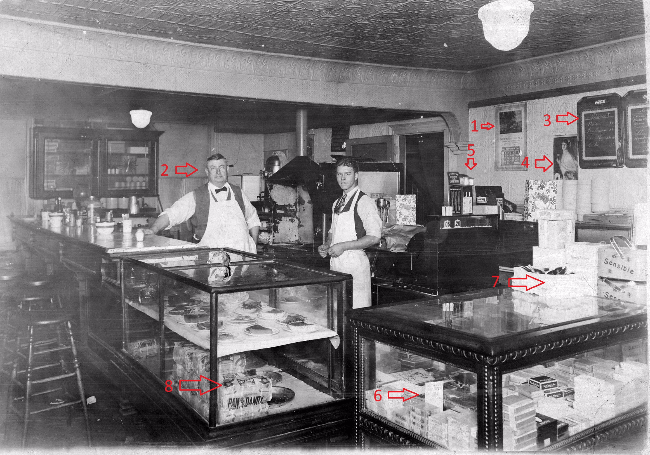 Arrow 1. A calendar with “John M. MacFarlane, Chemist and Apothecary” printed below the picture. The month is November, and the first day falls on a Monday, so it was either 1915, 1920 or 1926.

Arrow 2. Since the two men are wearing store clerk aprons, we can assume the man in the picture is not John MacFarlane (or McFarlane) and this is not his drugstore. Had it been a drugstore, they would be wearing white lab coats.

Arrow 4. Picture of a Coca-Cola Girl advertisement that closely matches Coke’s 1923 advertisements. Since the city directories tell us John had his drugstore by 1918, and by 1928 he was no longer at 163 Main, we can infer this photo was taken November 1926.

Arrow 5. Smith Brothers and Lance cough drops. The Lance Co. had introduced the Tootsie Roll in 1918.

Arrow 6. Cigar and cigarette cases with Murad-brand Turkish cigarettes, and Between the Acts cigars.

Step imaginatively into this photo and back in time to see why local history study is so much fun.