The Haldane girls’ volleyball team won the Section 1, Class C title at Pace University on Nov. 5 with a 3-1 victory over top-seeded Rye Neck but fell short in the regionals to Section 4 champ Tioga.

The Blue Devils, who finished 16-8, moved up from Class D to C last year after winning 13 consecutive Section 1 titles through 2015. Rye Neck had defeated the Blue Devils during the regular season in four sets. 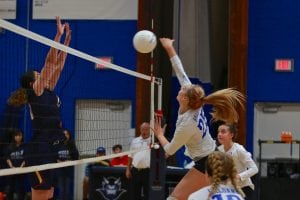 Willa Fitzgerald (25) spikes the ball during Haldane’s 3-0 victory on Nov. 3 over Keio Academy in the first round of the state tournament. (Photo by Ross Corsair)

Haldane had a tougher time on Nov. 7 against Tioga, losing 3-0.

“This is an amazing accomplishment,” said Coach Kelsey Flaherty of the sectional title. “They played high energy volleyball, and they never gave up.” 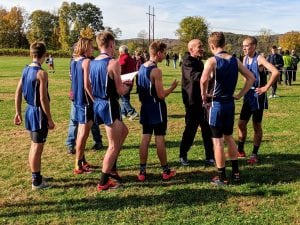 The Haldane girls, led by freshman Shannon Ferri (21:44.30), were the only team competing in Class D.

Both Haldane teams next compete in the Class D state championships on Nov. 11 at Wayne Central High School near Rochester.

After winning the Section 1, Class C title and the first game of the regional tournament, the Haldane girls’ soccer team fell, 2-1, in the regional final on Long Island against Section 11 champ Southhold/Greenport (14-4). The Blue Devils finished 7-11-2.

Playing for the Section 1, Class D title against perennial rivals Tuckahoe, the Blue Devils jumped to an early lead but were defeated, 36-33, when a fourth-down pass from the 5-yard line to win the game with 30 seconds left fell short. 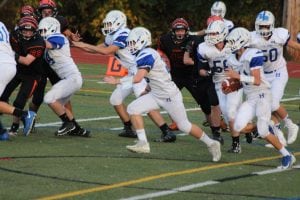 Brandon Twoguns looks for running room during the first half against Tuckahoe on Nov. 3. (Photo by Kim Giachinta)

The Blue Devils finished 6-3. The Tigers (7-2) play Section 9 champ Millbrook at Mahopac on Nov. 12 in the state quarterfinals.