Horses are therapy for traumatized veterans

Most pet owners can attest to the ability of a cat or dog to de-stress its human. Horses can do the same thing, which is why Topfield Equestrian Center in Philipstown hands traumatized veterans a brush, then puts them in the saddle.

Topfield, formerly known as the Therapeutic Equestrian Center, has been offering therapeutic services to veterans since 2011, after launching a program in partnership with West Point called the Warrior Transition Unit. After the Army disbanded the unit (the academy is not a combat post), Topfield partnered with the VA hospital in Montrose to help veterans suffering from Post-Traumatic Stress Disorder, as well as veterans at St. Christopher’s Inn at Graymoor dealing with addiction. 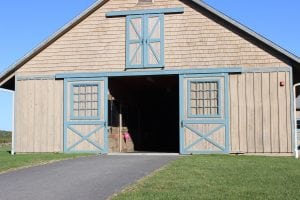 A barn at Topfield. (Photo by A. Rooney)

Today, Topfield offers therapy in association with the Equine Assisted Growth and Learning Association (Eagala), a nonprofit based in Utah that advocates using horses to address mental health issues.

Each veteran typically visits Topfield for four to six weeks, explains John MacEnroe, the center’s executive director. Each session has as many as 16 participants, eight of whom are in the ring at a time with the counselors and three to five of Topfield’s 13 horses.

“We give the participants what we call a Challenge Coin in recognition that we honor and support their service,” says MacEnroe, who is a veteran himself. He says that being with a horse can be calming. “A horse’s heartbeat is much lower than a human’s, and being in its presence and brushing and grooming brings down a person’s heartbeat and blood pressure,” he says.

An important part of the therapy is to always have a military member or active-duty spouse or child in the ring. “This is a unique population,” MacEnroe says. “Only 1 percent of the U.S. population is serving and only 7 percent of the population has ever served. There’s a huge disparity between civilian and military society in terms of shared sacrifices. To understand the ethos is the challenge.” 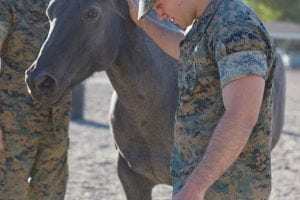 A Marine in Utah connects with a horse as part of an equine therapy session. (Photo by Richard Meade/Eagala)

“Everyone experiences trauma differently,” he says. “In the global war on terror, there’s more moral injury because it’s an ‘asymmetrical conflict.’ That is, the enemy is not in uniform, and there are often women and children around. If you fire, then find out that the people were not combatants, there’s a struggle with ‘I killed a family.’ It’s not as clear-cut as the Huns coming over the trenches.”

The veterans generally have a positive response to the horses, MacEnroe says. “Most say it’s the best part of their week, except they use language which is far more colorful than that.” 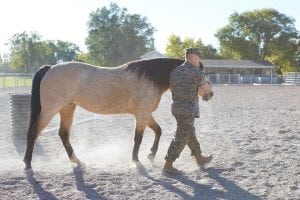 A Marine in Utah connects with a horse as part of an equine therapy session. (Photo by Richard Meade/Eagala)

On Oct. 29, Topfield hosted a conference to explore other equine therapies with names such as Saratoga Warhorse, Man ’O War Project and Natural Lifemanship, as well as Native American cleansing rituals. “This is a population for which one size definitely doesn’t fit all,” MacEnroe explains.

He says the veterans who come to Topfield strike him as people for whom “the wish to serve is part of their nature. We’re helping them get back on the track of service,” he says. “They’re the Scout leaders, the people who run food pantries. They’re just great folks.”