Eric Wagner has been taking classes at the Garrison Art Center for more than 50 years. He’s finally ready. On Jan. 27, the center will host the 86-year-old retired IBM engineer’s first solo show.

Wagner, who served on the art center board for decades, discovered it through his wife, Miriam, who was one of its founders. The couple moved to Philipstown in 1961, early in Wagner’s 40-year career at IBM. (He retired in 1993.)

His paintings combine mathematical precision with the searching eye of an artist. “If you go out and draw or paint, it’s almost photographic,” he says. “You’re being controlled by the reality.” An artist needs to “modify the reality” but remain in harmony with it. 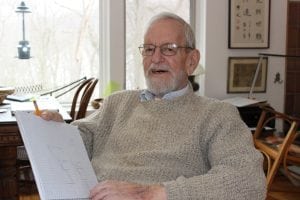 Eric Wagner (Photos by A. Rooney)

Wagner has always drawn, dating to his school days in Croton, where he grew up as the son of a Bauhaus-trained architect in a home his father designed. He attended Vermont’s progressive Putney School and Harvard, where he majored in physics but took just as many humanities courses. After being drafted into the Army during the Korean War, Wagner used weekend passes when stationed in Japan to visit traditional inns, drawing what was around him and trying photography, too.

After the army, he joined IBM in Poughkeepsie as a “logical designer” in its nascent research division. With IBM’s support, he earned his doctorate in mathematics from Columbia, all the while continuing to put brush to canvas.

“It was a period of particularly bad painting,” he recalls, chagrined. “I was doing realistic paintings, not at all about mathematics, such as a portrait of Descartes with a horse in the background.” 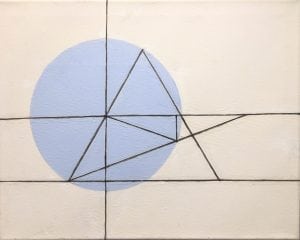 Along with classes in pottery and sculpture, Wagner has long taken landscape painting with Martee Levi, who worked to shift him away from the literal.

“The trouble is, most people want to copy nature,” Levi says. “I told Eric that we should start by looking at Cezanne, that it’s about looking beyond the trees to see the geometry behind them. We have this agreed-upon reality, but great artists go beyond that.”

The pair has been working together for 15 years, sometimes as part of a group which meets at Levi’s home studio in the woods. “Every time he would finish a painting, Eric would put it on the wall and there would be a calmness which emanated from it,” Levi says. “After doing landscapes, he had a period of painting found objects — you should see his garage! — and putting found objects together. Those paintings are wonderful.” 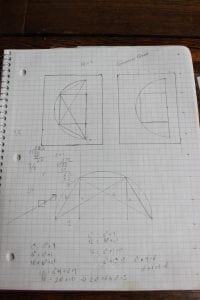 Wagner makes notes before putting paint to canvas. (Photo by A. Rooney)

Describing Wagner’s process, Levi says: “He sits in class and works on graph paper. I wish I could frame all his drawings and show where it comes from; it’s fascinating. A couple are just lines, but again, it’s their relationship. Sometimes it’s about getting beyond his algebra.”

Asked where his work comes from, Wagner responds, “I don’t know. But certainly some parts are mathematical and other key construction comes from architecture. Some are simply experiments in minimalism.”

It was Levi who suggested the art center organize a solo show to honor Wagner’s talent and commitment. He pronounces himself “amazed and very pleased” to have his paintings showcased. All the works are untitled because, as he explains, “the natural title would be something like: ‘Trisecting the 60-degree angle’ and half the people would leave the room and the other half would be confused!” 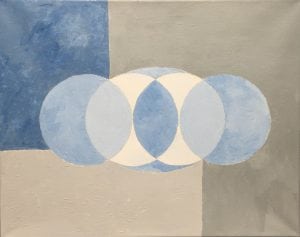 Wagner says he spends time contemplating his pieces and, as an example, notes that he recently “noticed a phenomenon in two paintings: In both cases I did it with an isosceles triangle and didn’t mean to. I’m curious about doing it without an isosceles: Would that be an improvement?”

Wagner’s art will be on display in the Balter Gallery at the Garrison Art Center, on Garrison’s Landing, through Feb. 18. The other gallery is filled with works by Michal Gavish, an Israeli artist and scientist who uses watercolor and ink on photo transfers to layer urban imagery. The art center is open 10 a.m. to 5 p.m., Tuesday through Sunday.