In 1942, soon after the U.S. entered World War II, the Beacon post of the American Legion recruited one of its members, a sign painter named Jasper Urquhart, to design and create wooden panels on which he could add the name of every Beacon resident serving in the Armed Forces. 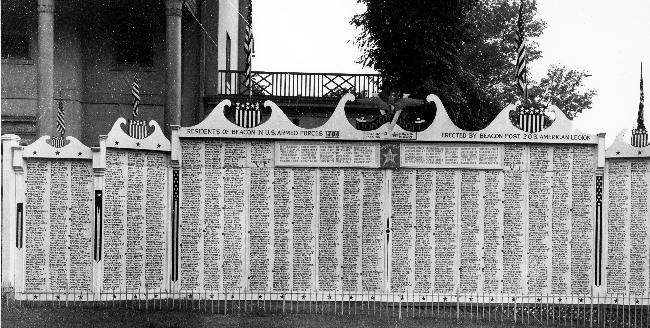 The first board was positioned outside Memorial Hall. Over the next three years, as more people joined the military effort, Urquhart added more boards. When the Fishkill resident completed his work in early 1946, after the war ended, he had added 1,704 names, including those of 60 men who did not come home.

Later that year the honor roll was dismantled. The Beacon News noted that saving the panels would be difficult because of their size, but a high-resolution color photo was taken and printed 4 feet wide for display in the window of Veta Budney’s florist shop across the street and later at Memorial Hall. Urquhart died in 1948 at age 58 and should be remembered as the artist who painted the names of honor for a grateful city.

Murphy has been president of the Beacon Historical Society since 1998. This article was excerpted from his blog at beaconhistorical.org.