A proposal to build six townhouses on the half-acre lot across from the Beacon train station was heavily criticized during a short but cogent public hearing at the city’s Planning Board meeting on Tuesday (June 12).

A half-dozen residents spoke during the hearing, which was held to get feedback on the environmental impacts of the proposed development. At the board’s request, Tom Elias, a project representative, said he would provide more detailed renderings of the plans.

Called Ferry Landing at Beacon, the project would be located at the corner of Beekman and Ferry streets. It would include six 4-story townhouses, each with a one- or two-car garage, on Beekman, the current site of the well-known “Welcome to Beacon” rock wall. 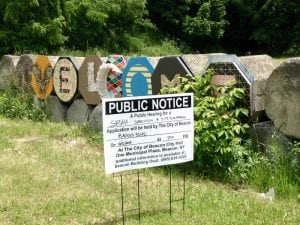 It’s not clear what will happen to the “Welcome to Beacon” sign if a proposal to build six townhouses is approved by the city. (File photo by J. Simms)

While Elias argued the project doesn’t exceed the zoning limits for the parcel and supports the goal of the city’s comprehensive plan for “compact, high-density” development in the waterfront-to-Main Street linkage district, he found little support from residents or Planning Board members.

“This is the first thing you see in Beacon when you arrive from the train,” said David Burke, a member of the board. “I ask you to make sure that you’re convinced, yourself, that this is going to be the right development for this site.”

Residents of Bayview Street, which overlooks the property, objected to the possible obstruction of their Hudson River vista.

“Most of the value of my home is in that view,” said Bradley Dillon. “It would be really disheartening to have a four-story building come up.”

The final speaker, James Pantano, suggested the site was more appropriate for “trees, flowers, benches [or] a fountain” and hoped the proposal would be “nipped in the bud.”

The Planning Board on June 12 granted environmental approval for a request from St. Luke’s Episcopal Church to subdivide its Route 9D property and allow the Hudson Hills Academy to expand into the church’s school building.

The proposal drew considerable feedback from residents, many of whom expressed concern that it would bring too much traffic to Rector Street, a narrow residential road adjacent to the church. 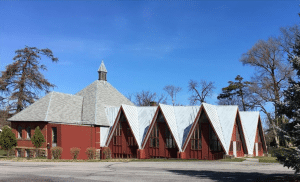 Hudson Hills Academy would operate out of the school building at St. Luke’s Church on Route 9D. (Photo provided)

School officials seemed to address most of the traffic concerns by agreeing to use entrances and exits on Phillips Street and 9D while avoiding Rector. The school also agreed to cap enrollment at the site at 100 students.

Hudson Hills must next obtain a special-use permit for the expansion from the City Council. Its lease with St. Luke’s is expected to run for 10 to 15 years.