Mr. Youmans was returning to Cold Spring when, as he came in sight of his house, he saw his roof on fire. He managed to extinguish the flames, which had been started by sparks from the chimney.

A nine-inch crack appeared in the West Point Foundry bell.

Copies of a new book, Ragged Dick, or Street Life in New York with the Boot-Blacks, by Horatio Alger, arrived at the News Depot.

Isaac Riggs of Nelsonville reported that someone had taken his gate off its hinges and carried it away.

David Lloyd of Nelsonville returned from a trip to Cuba with an 11-inch-long chameleon.

The contract for carrying the mail between the Cold Spring and Nelsonville post offices was awarded to James Bailey.

William McClary opened a livery business in the stables adjoining the Pacific Hotel. His carriage met all trains and boats.

Gen. and Mrs. D. Butterfield, who spent the winter traveling in Europe and the Holy Land, returned home to Cragside, their summer residence.

The homes of many residents were adorned with flowers and flags for Decoration Day (Memorial Day) to honor the military dead. 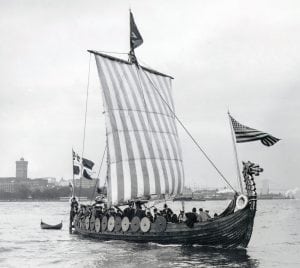 The Norwegian Viking ship sailed up the Hudson in 1893 on its way to the World’s Fair in Chicago. (Vikingship.us)

A Viking ship sent by the Norwegian government to exhibit at the World’s Fair in Chicago passed by Cold Spring on the Hudson being towed by a tug.

The Garrison baseball team admitted it needed more practice after it lost to Highlands Falls, 28-8, and to Cold Spring, 27-6.

Concerned about handing control of the village water supply to a private company, the Cold Spring Board of Trustees revoked a permit given to the Water Works Co. to build a plant. However, some residents argued a plant was needed to protect against fire and because only a few homes had indoor bathrooms.

Robert Likley sued the Hudson River Railroad after a conductor tossed him off the train at Highland Station for refusing to buy a ticket. Likley said the conductor had already taken his ticket when he boarded in New York.

The Young Peoples Society of Christian Endeavor (YPSCE) of the Presbyterian Church presented the two-act farce,  The Irish Linen Peddler, at Town Hall.

Two gold pens on display at the store of Charles Pelham were the prizes for the best debaters of the Literary and Debating Societies at Haldane Union School.

A body found in the river was identified as that of Edward Higgins, 34, a former resident of Cold Spring who had moved to Philadelphia seven years ago and apparently drowned while on his way home to visit his parents.

An eagle that Thomas Groves shot and disabled some months ago and kept as a pet (during which time it killed and ate a cat that ventured too close), was confined to a slatted box and deposited at the train station to be taken to the Central Park zoological collection.

Just two days after the Main Street gutters were thoroughly cleaned, they were filled again with banana peels, orange skins, scraps of paper and sawdust.

A dog poisoner was on the loose: One morning four dogs and a cat were found dead on Church Street; several dogs were sick and six were missing.

One morning the mail pouch thrown from a northbound train was caught under the wheels and ground to pieces.

Paul Shimmon, a Persian by birth, gave a lecture on Persia at St. Mary’s Church in Cold Spring dressed in Persian costume. He wrote and spoke in Persian and Syriac and showed a copy of the Quran written in gold letters.

Joseph Perracciolo Sr., Edward Berrigan Jr., Town Clerk-Tax Collector Edward Collard and James LaDue attended a Sunday afternoon doubleheader between the Yankees and the Cleveland Indians. They made the trip on the New York Central Railroad.

The Philipstown Salvage Committee received word from the War Production Board that the collection of scrap rubber would be temporarily suspended.

Nine of the 43 members of the Haldane graduating class will be inducted into military service after the close of school.

The Cold Spring Board of Trustees reported it had received numerous complaints of children playing baseball in the streets, particularly on Garden, Pine and Parrott.

The board voted to install an outdoor sprinkler system in Southard’s field opposite Selleck’s Garage on Fair Street for children on exceptionally hot days. 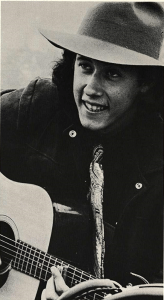 Arlo Guthrie performed in Garrison in 1968.

Linley George, a resident of Arkville, New York, was stabbed in the face and arms at White’s Cottages on Route 9 in Philipstown last month, according to a police report. He had rented a cottage with John Herstich, of Fremansburg, Pennsylvania, who was arrested the day after the assault with a stab wound to the chest.

Putnam County Sheriff Ray Weizennecker announced it was Voluntary Weapon Surrendering Month in which anyone with an illegal firearm could turn it in without being arrested. However, the sheriff asked that he first be notified in writing of the approximate time and day the weapon would be surrendered.

A proposal to merge the Haldane and Garrison school districts was defeated, 695 to 594.

The Philipstown Volunteer Ambulance Corp. announced it would purchase an ambulance to replace its 1953 Cadillac. The Cold Spring Fire Co. also said it would buy a truck for $30,000, the largest purchase it had ever made.

A number of residents from Kent, Putnam Valley and Philipstown calling themselves the Sewage Waste Action Team gathered at Fahnestock Park to protest a sewage-sludge treatment plant proposed for a 300-acre tract in Kent near the Chuang Yen Monastery. It had first been proposed for a site just off Route 301 in Putnam Valley near the Philipstown line to process sludge from Yonkers.

A Philipstown Town Board workshop was packed with spectators as board members and the highway superintendent discussed which roads should be paved.

A 24-year-old Newburgh man died after falling about 20 feet from a cliff at Little Stony Point.

A joint commission appointed by the Nelsonville and Cold Spring mayors to save Butterfield Hospital canceled a public meeting and a fundraiser.

The Hudson Valley Shakespeare Festival announced that, for its sixth season, it would perform two previews and 16 regular performances of The Merry Wives of Windsor.

Bruce Simon of the Simon & Simon Racing Team of Garrison crashed on the fourth lap at the first national race of the season in Connecticut. His car, the Flying Spitfire, was co-sponsored by Minardi’s Auto Body of Cold Spring.