Two Hudson Valley writers, Diane Lapis and Anne Peck-Davis, used this original recipe to concoct their recently published Cocktails Across America: A Postcard View of Cocktail Culture in the 1930s, ’40s and ’50s:

The women have been friends for more than 25 years, and they share a passion for vintage postcards that depict bars, cocktail lounges and supper clubs. 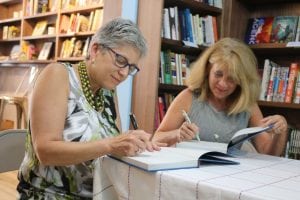 “When we compared our collections, thousands of cards, we thought about how great it would be to visit those places,” says Peck-Davis. “We wondered what people wore back then, what they listened to — and what they drank.” 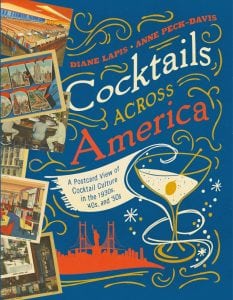 The places depicted on each postcard, along with the people, their stories and the cocktails, became the raw material for an intriguing and enjoyable read. Cocktails Across America is as much about history, geography, culture and colorful characters as it is a collection of recipes for equally colorful vintage drinks.

Cocktails and postcards may seem an odd combination, but decades ago bars and restaurants often printed hundreds as a form of cheap advertising. Patrons would dash off a few words, sometimes bragging, “Look where I was tonight!” At times, bar owners even provided a stamp and mailed the card.

The hardcover includes more than 50 recipes, some all but forgotten, and is illustrated with the images of more than 200 colorful, airbrushed postcards produced on linen between 1931 and 1955. Reproductions of four cards can be detached and mailed.

Research for the book turned up some surprises, according to its authors.

“The St. Regis Hotel in New York City had a supper club called the Iridium which had indoor ice-skating shows,” says Peck-Davis. “It was a thing then: numerous clubs and hotels had ice-skating ‘tank shows’ on a rink that came out from under the floor of the orchestra.”

Bowling lounges, which started in bars, had their heyday in the 1940s and ’50s. 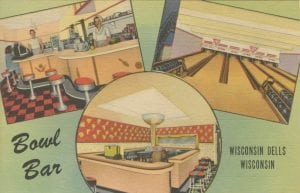 The Bowl Bar in the Wisconsin Dells

“Bowling alleys literally started in a bar,” explains Lapis, who is a trustee at the Beacon Historical Society. Once pin-setting technology replaced pin boys, who were “often not of the greatest character,” Lapis notes, women and families began going to bowling alleys, some of which provided baby-sitting.

One particular trend caught their attention.

“We found a merry-go-round on a post card, and it turned out to be a bar!” Peck-Davis says. “The bar and the barstools rotated slowly.”

Further investigation turned up merry-go-round bars in a number of cities, including Boston, Chicago and San Francisco. The Merry-Go-Round-Bar at the Ritz-Carlton in Atlantic City is one of five portrayed in the book. “Even modest taverns started to install little merry-go-round bars,” Peck-Davis says.

“As far as we know, there is only one merry-go-round bar left, in New Orleans, at the Hotel Monteleone,” Lapis says. They plan to have a drink there while attending the annual Tales of the Cocktail Convention that begins July 16. The duo will also speak at the Museum of the American Cocktail. 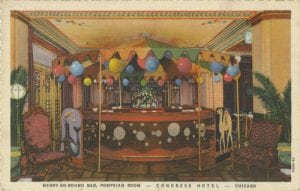 Their visit to the merry-go-round-bar won’t be the first time the women have shared a drink. “We tried every one of the book’s cocktails, but sometimes we divided the labor, the research, in half,” Peck-Davis says.

“I’m a newbie in the world of cocktails,” admits Lapis. “It turns out they’re pretty good!” The pair hosted parties to test recipes on friends and family.

If the recipes captivate Lapis and Peck-Davis, they find the stories behind the postcards equally intriguing. Lapis said she thought a card from the Piccadilly Bar in Reno was pedestrian until she took a closer look using a magnifying glass.

“The customers are holding copper mugs,” she says. “It’s the only card I’ve found showing people drinking Moscow Mules,” a drink thought to have been invented at the Piccadilly that is traditionally served in a copper mug. 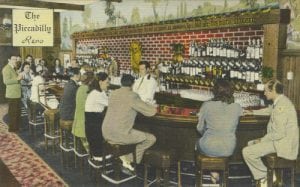 The Piccadilly Bar in Reno, birthplace of the Moscow Mule

Some of the authors’ favorite stories involve once-forgotten cocktails that have been revived, such as The Last Word, which was created at the Detroit Athletic Club during Prohibition. “It was on their menu, then off, and later showed up in a cocktail book published in 1951,” says Peck-Davis. In 2004 a bartender in Seattle came across the book and began serving The Last Word. “Everybody loved it,” Peck-Davis says. “It’s been reborn.”

The Aviation tops Lapis’ list. One of its ingredients, Creme de Violette, went missing from U.S. shelves for decades. “It was available, then it wasn’t, and now it’s back again,” she says. Lapis describes the drink as “violet-flavored, delicious and with a beautiful, purplish hue.”