“Artists in the Hudson Valley didn’t realize there were other artists around,” recalls Herman Roggeman, who co-founded Collaborative Concepts with the late Peter Clark. “I thought, why don’t we do a show in Cold Spring? The first few artists I mentioned it to said, ‘Nobody in the Hudson Valley is interested in art,’ but luckily Peter, who was affiliated with the Garrison Art Center, had a lot more powers of convincing.” 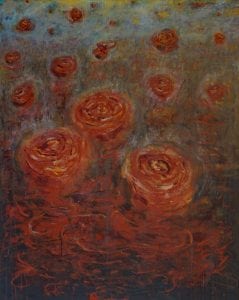 The show, which took place in Nelsonville, was a success and led to many more over the years. Its most recent exhibit, Collaborative Concepts 2D, at Hudson Beach Glass in Beacon, includes works by 25 artists and continues through Aug. 5. It was curated by Barbara Galazzo, who owned Gallery 66 NY in Cold Spring before it closed last year.

The nonprofit Collaborative Concepts, while run by a board of directors (including Roggeman and Galazzo), has never been a co-op or had members. 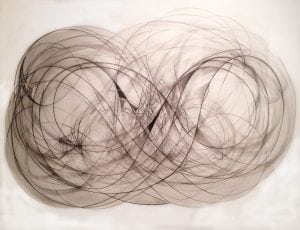 “Lost in Infinity,” by Francine Perlman

“Our focus has always been promoting artists without obligation,” Roggeman says, “When artists collaborate, a lot of things happen, not just in art, but in community. A big support system is what it turns out to be.”

In 2001 Collaborative Concepts opened a gallery in Beacon with help from the city, which was trying to rejuvenate the local cultural scene. During its five years in the space, which included an outdoor area for sculpture, Collaborative Concepts presented more than 30 exhibits. The gallery closed after the neighborhood gentrified. “Even the little we paid became difficult to raise, month after month,” Roggeman recalls.

Today the group organizes its shows in a variety of venues. The most expansive is Saunders Farm in Garrison, where for the past 13 years it has presented an exhibit of outdoor sculptures set in the fields that opens on Labor Day weekend. “It works because it’s a real farm, and not a sculpture park,” Roggeman says. “That gives artists a chance to experiment within realistic limitations.”

Collaborative Concepts has undertaken other ad hoc projects, too, among them the installation of work by 15 regional sculptors addressing concepts such as light, organics, recycling and sustainability along newly created nature trails at the Rockland Center for the Arts. Another project was the Highland Falls ArtWalk, a mile-long stretch of 18 sculptures lining Main Street. 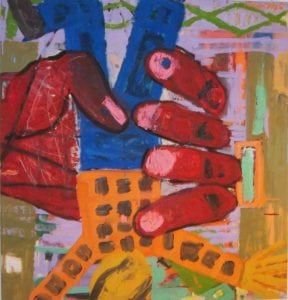 “I’m always looking for other approaches, other public places for art,” Roggeman says. “I’d like to see Collaborative Concepts work with other municipalities through the Hudson Valley, from New York City to Albany, one location after the next, creating art districts. Artists come first, then coffee shops, then restaurants. It’s a nicer way to start gentrification, rather than having major developments.”

The exhibit at Hudson Beach Glass, at 162 Main St. in Beacon, is open from 10 a.m. to 6 p.m. Monday through Saturday, and 11 a.m. to 6 p.m. on Sunday. For more information, see collaborativeconcepts.org.