During her commute by train between Cold Spring and her job at Columbia University, Summer Hart says she often gazes out the window, taking in the landscape.

“I’m writing things down, taking off from what I’m seeing,” she says. “The world I’m envisioning might have invasive plants taking over a post-human landscape, or it could be a fairytale forest, or something else which moves between biology and storytelling. I keep a running list of phrases and titles.” 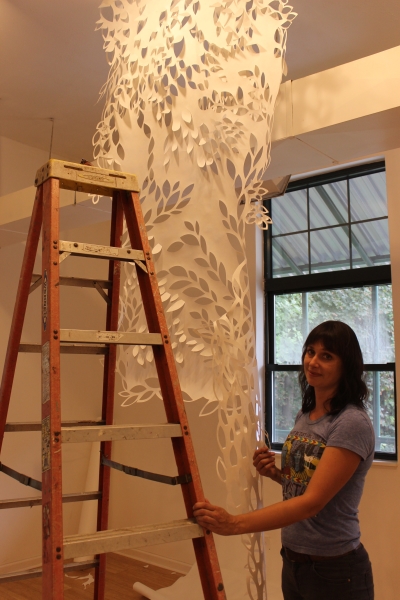 Summer Hart installing her work (Photo by A. Rooney)

One of those phrases, further evidence of invasion, triggered by water chestnuts washing ashore along the Hudson, became the title for Hart’s cut-paper installation at Nelsonville’s Create Community space that opens today (Sept. 7) with a reception from 6 to 9 p.m. and continues through Wednesday, Sept. 12.

Hart says it’s her way of introducing herself, and her art, to the community. She and her husband and their son moved to Cold Spring a year ago.

Hart calls herself “fascinated by organic geometry. The kind found in nature, fracturing, patterning, plant defense mechanisms.” She ascribes some of this to growing up in Maine. “My work always has an element of forest and sea. There are sometimes feathery structures, barnacles. Moving to the Hudson Valley has heightened things. I take my dog for a long walk every day, and notice things: wineberries, snapping turtles — a tangible wild nature does affect what I’m doing.”

Her installations take the form of cascading “living walls” of Tyvek, a material which simulates paper but is hardier. Hung from high and draped on the floor, the walls express a “vision of a ghostly nature, creeping in through any breach, fissure, or opportunity,” Hart writes.

She says her work is a lot about obsession — and that she creates it obsessively. “When I’m doing the actual cuts, I lose time, in my head. It becomes meditative. I do no sketching; it’s action/reaction and if I make a mistake, it becomes something else.”

“They combined 19th-century botanicals with Victorian children and zoological images, creating two factions: animals like the songbirds who nest and the raiders in raspberry brambles,” she explains. “All were figures out of their own time which occupied interstitial spaces, in between sleeping and waking, joy and grief.”

When she did an installation at the Vermont Studio Center, “the reactions were all over the place, from ‘Fairytales forest dreamland’ to ‘Dangerous, but not dark.’ ”

The cut-paper works stem from the same ideas. Hart says she began working in this form when she was asked, in 2016, to collaborate with a Berlin-based DJ, to investigate “synesthesia” of the senses, in this instance, sound and visual. 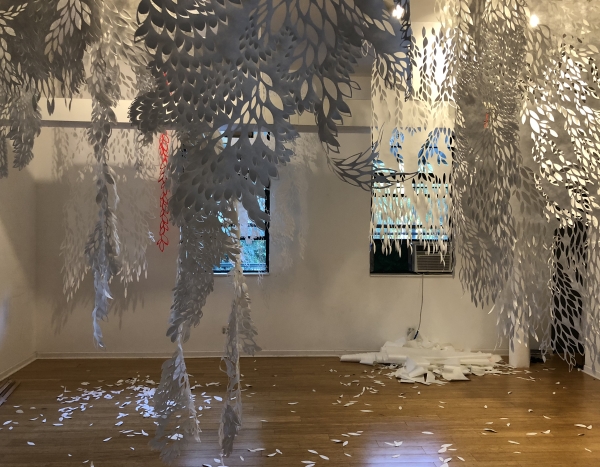 The installation of “further evidence of invasion,” in progress (Photo provided)

“I closed my eyes and heard the sounds, and got very detailed visuals,” Hart recalls. “He did electronic, startling sounds which I translated into cutting rolls of paper using an X-Acto knife, dropping the figurative, focusing on the swarm, the cluster.” In future projects, she hopes to incorporate the sound of cutting paper into her installations.

Hart, who trained in book arts and printmaking, received a bachelor’s degree in fine arts from the Hartford Art School and a master’s in fine arts from the University of the Arts in Philadelphia. In February she’ll be doing a solo installation at a Philadelphia gallery called The Art Dept., and some of that work is included here. She works in the University Seminars Division at Columbia, taking care of its archives, website and design; her husband is a professor there of English and comparative literature.

Create Community is located at 11 Peekskill Road in Nelsonville. The gallery will be open Saturday and Sunday from 12 to 4 p.m. and Monday through Wednesday from 9 a.m. to 7 p.m.