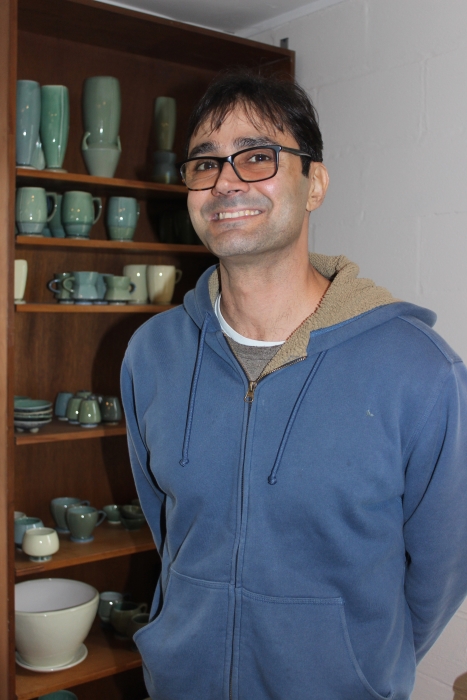 Frank Saliani (Photo by A. Rooney)

“Ceramics,” says Frank Saliani, “is the oldest technology on the planet.”

The artist, who runs Cold Spring’s Green House Pottery, offers this explanation: most of what remains of earlier civilizations is pottery, particularly implements used for the consumption of liquids and food. That pottery is “a formal investigation into how we dissect the world, how we take knowledge and reassemble it into patterns and tools to manage the world around us,” he says.

The fusing of decorative and practical is evident in Saliani’s work, exhibited in what was formerly the garage of his village home. There, largely in soothing shades of green and blue, reside teapots, drinking vessels, oil cruets, bowls, vases and tiles, the latter made from leftover clay.

“Ceramics are very environmentally friendly, because they’re durable, although it does begin with raw material mined out of the earth,” he says. To compensate, Saliani switched from a gas- to wind-powered electric kiln. He also plans to install solar panels.

Some of what Saliani makes is thrown on a potter’s wheel. All of the work is porcelain, which “people think is delicate, but the opposite is true. It’ll bounce or shatter. There’s a spectrum of clay from terracotta, which has many impurities, to stoneware, which has fewer, to ‘pure’ clays like kaolin, which are included in porcelain. Most potters use clay bodies containing kaolin, feldspar and silica.”

For colors, Saliani says he’s “attracted to the yellow/green/blue combination. They happen to be next to each other on the color wheel, which helps, from a practical perspective, as it streamlines the process. I could have chosen, for example, yellow, red and orange, but those aren’t nearly as soothing.”

Saliani started making pots in high school. “I’m a 3-D thinker,” he says. “I built card houses, drew a lot. When I was 5 or 6, my aunt and uncle bought me a little electric potter’s wheel.” Saliani, who grew up in the Poconos region, says he benefited from a great high school art program and was already proficient in “throwing” when he headed to Syracuse University to study art education. But during his first year there, he switched to ceramics. 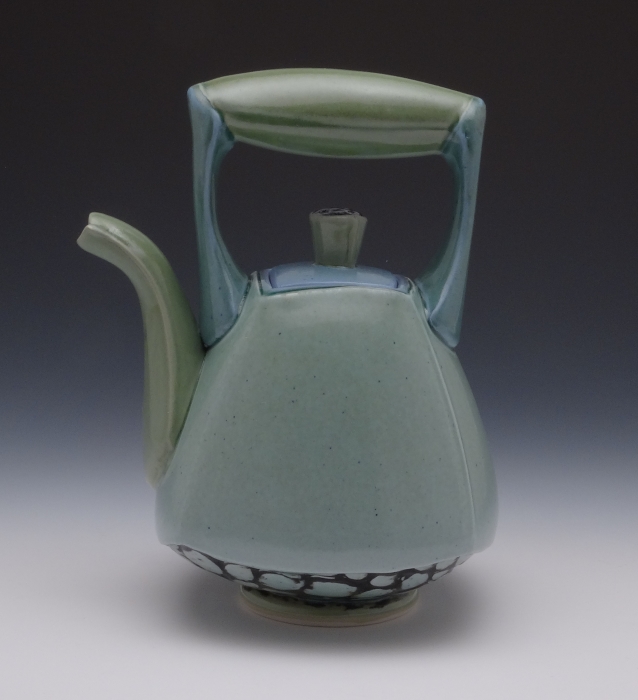 After graduation, Saliani moved to Colorado for a residency at the Carbondale Crafts Center, where he learned how to factor the altitude into his carefully calculated work. He continued at the Arrowmont School of Arts and Crafts in the Smoky Mountains, where he built kilns — “a big kiln will fire for five to seven days, using seven to 10 cords of wood,” he explains.

His next stop was the Red Lodge Clay Center in Montana, after which he spent three years at Ohio University in grad school. “I felt like my work was at a point where I needed something to give me a jolt,” he says. “I knew I needed time and community to think more critically about why I was doing it.” 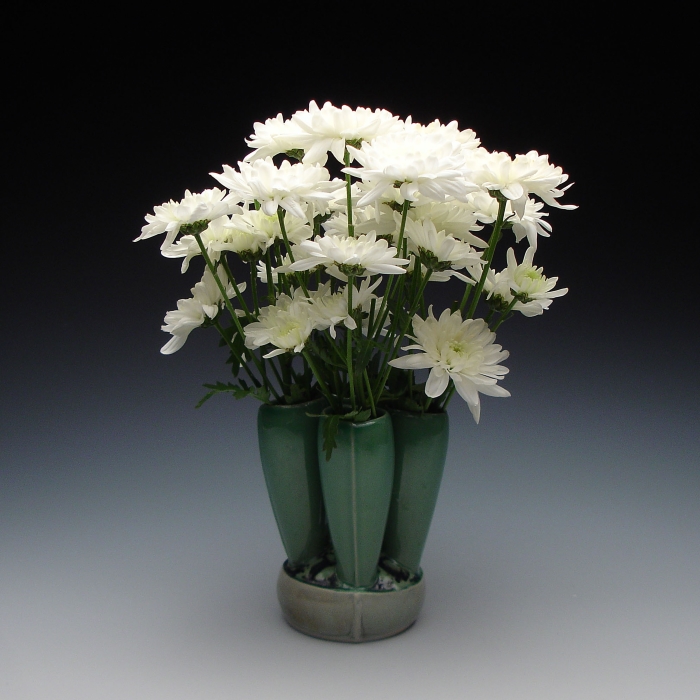 A quad vase, with separate sections for individual or small groupings of flowers

Saliani set up a studio in Brooklyn and made pots to sell at craft fairs, including a favorite, the American Craft Council Show in Baltimore. He work is also featured in the Artful Home catalogue. He moved to Cold Spring with his wife and their young daughter in 2017 and has a display at the farmers market every first and third Saturday.

Green House functional pottery starts at $25 for a small bowl, $38 for a mug and $200 for a teapot. To visit the studio, email [email protected]