The team is off to a strong start, with only one loss in five contests.

After a tough, one-run loss to Brewster on Monday, the Bulldogs rebounded with a 6-0 victory over league rival Hendrick Hudson on Tuesday at Dutchess Stadium and a 12-2 drubbing of previously unbeaten Nanuet on Wednesday.

In the win over Nanuet, Mike Lepere hit his first career homer, went 2-for-3 at the plate, and drove in four runs for Beacon (3-1-1). Jayen Lare drove in two runs and also went 2-for-3, and Kai Jacketti and Nick Lepere each had two hits. 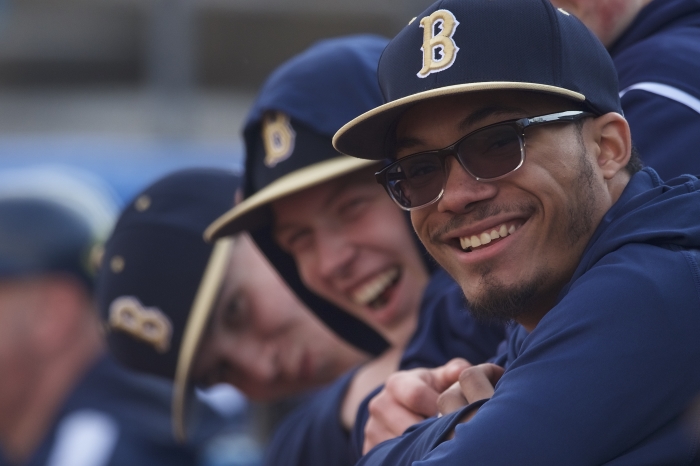 Beacon players are all smiles during a 6-0 win over Hendrick Hudson. (Photo by S. Pearlman)

Besim Dika picked up the victory on the mound in his first varsity start, going four innings and allowing one earned run while striking out four. Nick Lepere pitched the final two innings to earn a save, striking out two.

“Dika threw a lot of first-pitch strikes, had a good curve and change. He made a good debut,” said Manager Bob Atwell.

A day earlier, senior righthander Joe DeCandia threw five innings, striking out four batters and allowing only three hits in a shutout of the Sailors. He is now 2-0. Lare earned a save in relief.

“DeCandia has been overcoming an injury, and also had to pitch around the rain,” Atwell said.

At the plate, Mike Lepere and Lare each tripled, and Dillon Kelly and Nick Lepere had RBI singles. Dika and Shane Green also each had an RBI. 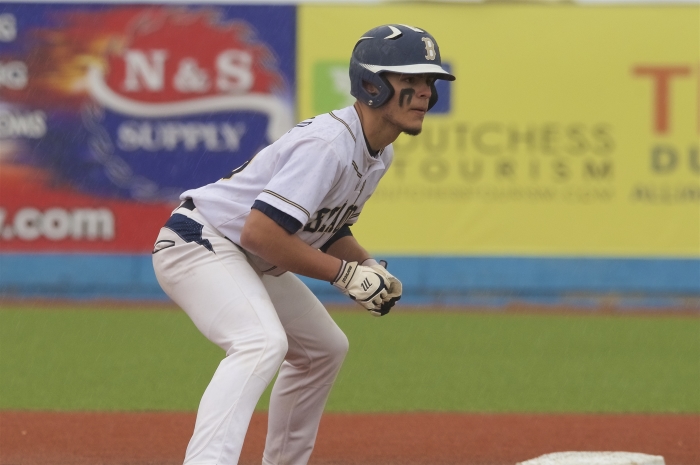 Mike Monzoeillo takes a lead off second base. (Photo by S. Pearlman)

This year’s team returns a solid core from last year’s 13-9 squad that lost in the sectional quarterfinals. “We have a great combination of experience and quality underclassmen,” Atwell said.

“DeCandia and Lare are two of our top pitchers,” Atwell said. “Lare has pitched nine scoreless innings to start the season, so he’s off to a great start. Both of them pound the zone.”

The Bulldogs will also count on a group of arms that includes sophomore Matt Manzoeillo, junior Dika, junior Ty Long, sophomore Mike Lepere and junior Shane Green. “These guys got their feet wet in scrimmages,” the coach said. “All of them throw well.”

The Bulldogs are scheduled to visit Nyack on Saturday, April 13, before hosting the three-day Spring Bash Tournament starting Monday.