There may soon be fake IDs being flashed at Dr. Peter Gergely’s pediatric practice in Garrison — not by the under-21 crowd, but by the over-21 patients unable to cope with the recent news that the practice is simply too busy to keep them on the rolls.

The previous cut-off was 26. The sizable contingent of young adults hoping to see Gergely and his staff, despite the indignity of sitting in a waiting room with a choo-choo and mazes, is a testament to the pediatrician’s decades-long popularity. Fittingly, Gergely will be honored by the Philipstown Depot Theatre at its May 5 benefit with the Depot Youth Theatre, which is celebrating 20 years. 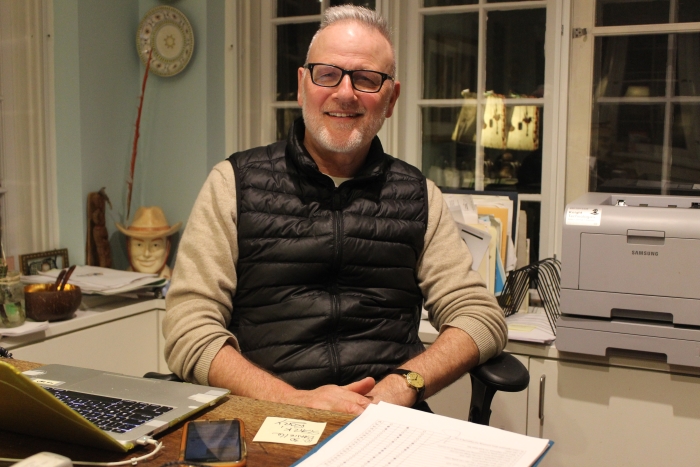 In his nearly 30 years as a local pediatrician, the doctor has come full circle, watching his patients grow from infants to adults and returning with their own children — sometimes after having married another former Gergely patient.

It was in 1990 that Gergely received a call from Butterfield Pavilion, which wanted to add a pediatrician to its roster.

“I had worked in emergency rooms around here for two years, doing shifts of 24 hours on, 36 hours off, and then started an illustration business [Gergigrafika] with my sister, Panni, cranking out artwork,” he recalls. “It was time for a change.”

He and Panni rented an office and, after four busy years, purchased and renovated a home on Route 403 near Route 9 that had most recently been a Sotheby’s office.

Gergely, who is 64, grew up in Nahant, Massachusetts, an island town north of Boston, with five older and two younger siblings. His interest in medicine formed early on.

“I remember standing in line in the fourth grade for our tuberculosis tests and seeing the doctor down the hallway and thinking: That’s the job for me. In art they said to ‘draw what you want to be,’ and I drew a man in a white coat next to a crib, with a little kid looking up at me. I was always comfortable around kids, and, inevitably there was always a group of kids chasing me around. Anatomy always interested me and I wanted to know how and why things worked.” 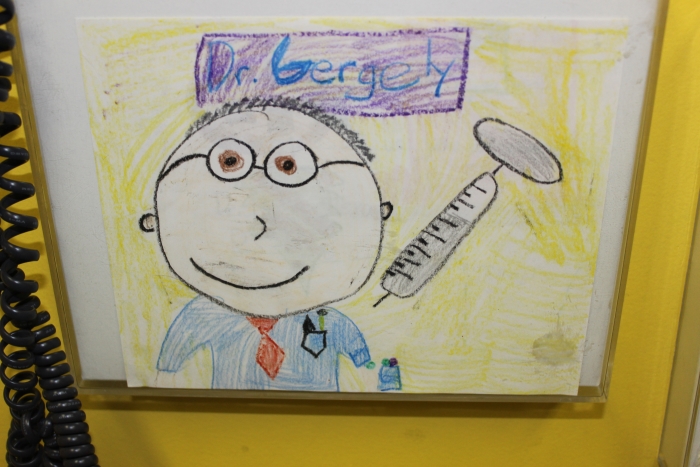 Many children give Dr. Gergely portraits, which fill his office. (Photo by A. Rooney)

After graduating from Dartmouth, where he majored in art and biology, Gergely was accepted to Tufts Medical School but the finances were problematic. He decided to join the Army, which promised him a scholarship in exchange for six weeks of active duty each year.

His first posting was in Monterey, California. On his first day — which also happened to be his first day in uniform — a colonel got on the elevator and said, “Lieutenant, you have all your stuff on upside down.”

At his practice, Gergely says “the true art of medicine” is patients getting a call back. “If you make that call, that follow-up, that reassurance, the parents will trust you forever,” he says. “We’ll get you through that anxious night. Caring, giving attention, is more difficult in a larger practice. We believe that you need at least 30 minutes for a decent, thorough, physical. How do you even start the conversation with a teenager in 10 minutes? We’ve resisted all the many efforts to be bought out. The sales consultants tell me: ‘But, hey, you can get rid of all your staff.’ To which I say that we actually like having them here!” 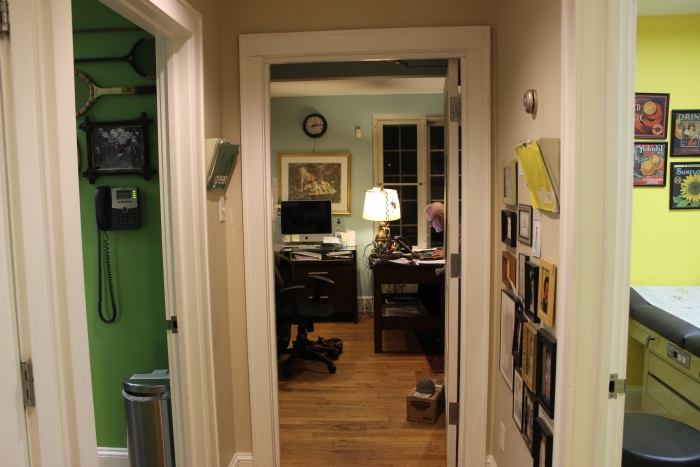 Night falls, and the pediatrician is still in his office, making reassuring calls to parents of sick children. (Photo by A. Rooney)

Nowadays, parents come in armed with information from the internet, something Gergely regards as more friend than foe. “We always hear, ‘I know I shouldn’t be looking things up online, but…’ I say: ‘It’s natural — as long as you don’t necessarily believe everything.’ Our only hard, fast rule is you have to vaccinate.”

Gergely has no plans to retire. He takes twice-yearly trips to Europe with his longtime partner, which he believes “will actually extend the number of years I wind up working. There are times when it’s toward the end of the day and I’ve got two more patients to see and I’m grumpy, and I slap myself and remind myself to relish it: Go out there, fix the problem. Here it’s different every 15 minutes. It’s great to be needed. There’s an intimacy that few people get in their working lives. I can go home and recharge.”