HVSF favorite adapts and performs in classic tale of Cyrano

Jason O’Connell, the popular comedian (and occasional tragedian) who has returned for a 10th summer at the Hudson Valley Shakespeare Festival (HVSF), is adding a credit to his bio this summer: writer.

Working with Brenda Withers, he adapted a well-known play written in 1897 by Edmond Rostand that is based broadly on the life of Cyrano de Bergerac, the 17th century nobleman and soldier, poet and musician. Five actors, including O’Connell, play multiple parts in the show, which opened last weekend under the tent at Boscobel in Garrison and continues through Aug. 30.

Because his large nose induces shyness and insecurity in matters romantic, the title character lives vicariously by supplying the words to woo to a handsome but inarticulate friend. Complications ensue, naturally. 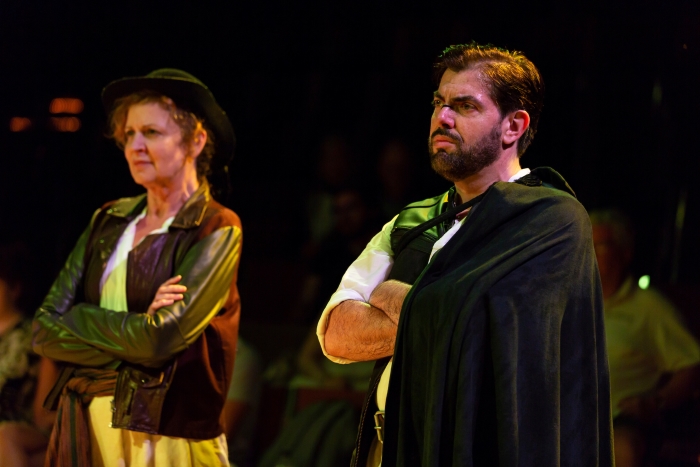 “When I started to write with Brenda I kept realizing that it is like an adolescent male fantasy: the tortured hero, the ‘I can do the most amazing things, but never receive love because of the nose,’ which is a stand-in for any rampant insecurity,” says O’Connell. “Cyrano has a big ego, and he’s a bit of a bully, though that’s part and parcel of his great intellect and wit. He lashes out like a cornered animal. There’s still adolescent anger in his heart. The  ‘That girl would never love me, but I have so much love for her.’ You lock on these things. It’s a potent place we all continue to live in.”

Cyrano represents many firsts for the Long Island-raised actor. It’s the first time he was commissioned to write a specific adaptation, and it’s also his first collaboration with Withers.

The assignment came from Kathleen Culebro, the founding artistic director of Amphibian Stage in Fort Worth, Texas, whom O’Connell met while performing in the Berkshires. In September 2017, she told O’Connell she might have a directing slot open the following January. “It could be anything, but I have two thoughts,” she said, including a three-actor version of Cyrano.

“I had lots of experience doing streamlined versions of plays, with actors playing multiple roles at a fast pace,” O’Connell recalls, “but I thought it might need more. I suggested cutting the play down, but Kathleen said, ‘Before you go down that route, I’m also interested in a brand new script.’ For a production in January!”

Culebro suggested he work with Withers. “So, I called Brenda,” O’Connell says. “We talked through everything about the play. What do we respond to in it? What would we hate to lose? What don’t we care about? We met a week later, and virtually everything we had done was in sync. It was like, ‘This can disappear, these three guys can become one foil.’ ” 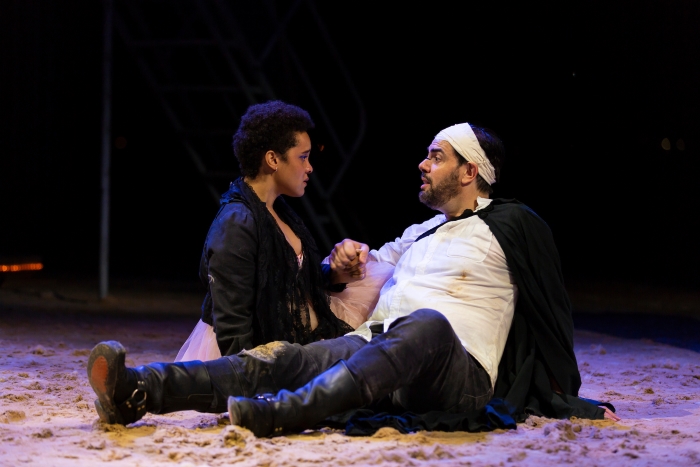 O’Connell directed the production in Texas for Amphibian, but did not perform; it also was produced at Glouchester Stage in Massachusetts but O’Connell was not able to see it because of acting commitments. O’Connell says the HVSF production is the first time he’s performed in something he has written while being directed by someone else (Meredith McDonough).

The tricky navigation is Cyrano-esque, but O’Connell has a model in his fiancee, Kate Hamill, also an HVSF favorite and known for her adaptations of literary classics such as Little Women and Pride & Prejudice.

“Kate writes and acts,” O’Connell says. “I’ve learned from her that you have to be aware that certain jobs overlap, but other times there has to be a distinction made. Even though you wrote it, and you have veto power, it’s an art to know which lane you’re in. As a writer, I take notes and share them later, not on the spot. There’s also a prism of seeing as ‘just an actor.’ You gain more perspective with every hat you wear.”

O’Connell thinks Cyrano is a perfect component of this year’s HVSF repertory. “There’s a fairy-tale aspect to it, much as there is in Cymbeline and Into the Woods,” he says. “There’s the notion of disguise and masks like Much Ado. Everyone is presenting a mask. There’s a Shakespearean scope and quality to the story, and it’s just right for a festival that embraces theatricality and community.”

(1) “My track in Complete Works of William Shakespeare (Abridged) [in 2008] because it was my first ‘big’ role under the tent and introduced me to the audiences here in a way that felt special.” 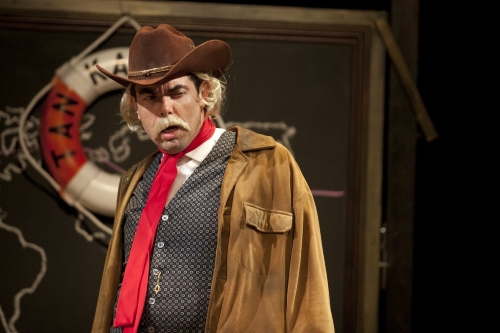 (2) “Around the World in 80 Days [in 2011] because, as with Complete Works, it was a show that clicked with audiences, and also because I met [my fiancee] Kate when she came to see a mutual friend in the play.” 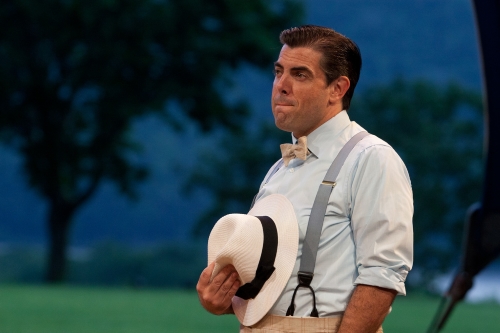 (3) “I will cheat and go with a tie since the roles and the plays are often seen as companions: the reluctant lovers Benedick in Much Ado About Nothing [in 2009] and Berowne in Love’s Labour’s Lost [in 2012].”

O’Connell decided in high school that he wanted to be an actor, and he received a scholarship to attend Hofstra University. “I was a straight-A student but a punk when it came to Shakespeare,” he recalls. “It didn’t connect. What I didn’t know is that the Hofstra program was big into Shakespeare.”

After graduating from college, O’Connell spent several seasons at Texas Shakespeare and also worked with the Unrehearsed Shakespeare Company (its productions were based on the original performances, where the actors never saw the whole script, only their own part). He also has played roles in Chekhov and Shaw and some contemporary dramas, including — like every other New York actor — an episode of Law and Order. (He played a jury foreman and his line was “Guilty.”)

O’Connell’s 10 seasons with HVSF have made him a recognizable face in Philipstown. Although he’s being stopped on the street more often now in New York City because of shows such as Sense and Sensibility and Happy Birthday Wanda June, “for a long time, I was recognized in Cold Spring more than anywhere else. It continues to be lovely and special to have that connection with a community.”