The Beacon Planning Board could vote next month to approve a scaled-back project to build six condos in the half-acre “Welcome to Beacon” site across from the Metro-North station.

First proposed more than a year ago, the development, called Ferry Landing at Beacon, has shrunk from its original plans, which called for four-story condos. The proposal now is for two-story brick buildings with a third-story recessed from the edge of the building.

The condos would be about 14 feet shorter than originally proposed.

But the residents who spoke during a public hearing at the July 9 Planning Board meeting — many of whom live in the neighborhood uphill and behind the project site — said the buildings could still obstruct views of the Hudson River and decrease their property values.

“This is a very historic area,” said Laura Bono, a Bayview Avenue resident. “It’s one of the few areas left where the public can actually go and see [the river]. We need to slow down the building and stop inhibiting the natural beauty of Beacon.” 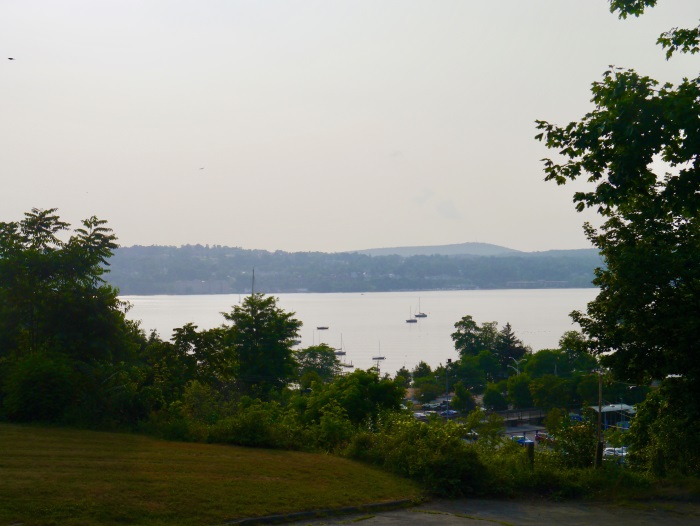 Residents in surrounding neighborhoods fear Ferry Landing will block views like this one of the Hudson River. (Photo by J. Simms)

The project has been through numerous public hearings over the last year, with the majority of the feedback negative. But board Chairperson John Gunn reminded the audience on Tuesday that the Planning Board can’t vote down a project simply because it’s unpopular.

The Ferry Landing site sits within the waterfront-to-Main Street Linkage District, which is zoned for higher-density residential development.

“The Planning Board doesn’t have the authority to disallow an application,” Gunn said. “We have to review it based on the zoning laws.”

With all of its public hearings closed, the board is set to vote on final site plan approval next month.

The board could also grant a request next month for a special-use permit to add a partial fourth floor to a proposal approved a year ago to build eight apartments at 208 Main St., the former site of the Pleasant Ridge pizzeria.

The already-approved plans call for retail on the ground floor with apartments split between the second and third stories. The amendment, if approved, would add a ninth apartment on the fourth floor, which project officials said on Tuesday would also include a rooftop garden.

Because the request is for a fourth floor on Main Street, the Planning Board must issue a special-use permit that says the project won’t negatively impact shadows, parking, traffic, or protected public views, and that it will be compatible with adjacent development.

Shelita Birchett, who lives a block from the site, on Digger Phelps Court, said during Tuesday’s public hearing that a fourth floor would cast shadows on her neighborhood and block its view of Mount Beacon. “We have had views of the mountain until the two big high-rises have come on Main St., so now our views are three-quarters cut off. With the new fourth floor [at 208 Main], our view would be completely obstructed and all we would see is the building across the street.”

The board is expected to vote on the amendment at its August meeting.