“I’d apologize for the chaos,” says Matt Clifton, who blogs with his wife, Emily, as Nerds with Knives, as a dog scurries between our feet, chickens strut around snaking tomato vines, and cats stare longingly outside from the porch window. “But that would imply that it’s temporary.” 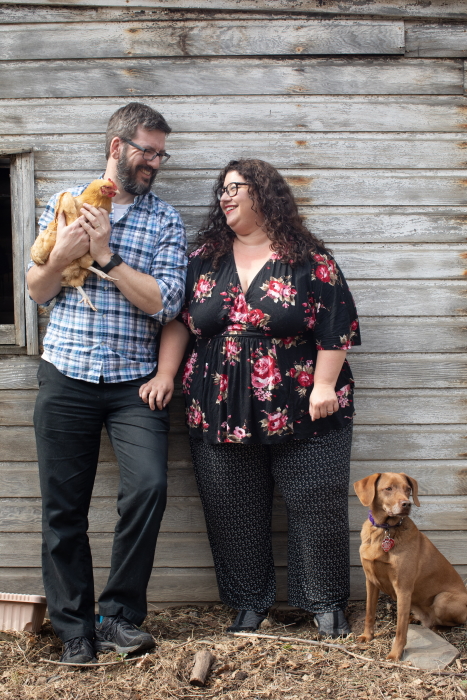 As publication day approaches for a cookbook that grew out of their blog, a whirlwind is not unexpected. But it’s also not the only thing the couple have going on. Emily works as a film editor and  spent the past two years cutting a documentary about gay women in southern music titled Invisible. (“We just got back from a surprise lesbian cruise in Alaska to screen the film,” she says.) Matt works as an information technology consultant and maintains an expansive garden in the full summer heat.

Yet they somehow found time to assemble Cork and Knife: Build Complex Flavors with Bourbon, Wine, Beer and More. It will be released Tuesday, Aug. 6, and they’ll do a cooking demo and a signing at Utensil Cookware in Beacon on Saturday, Aug. 10, from 6 to 9 p.m. “We’ll have some treats,” says Emily.

The blog started as a family project. The couple’s only major cooking endeavor was making Thanksgiving dinner, and each year, they couldn’t remember the details of what they had done the year before. That inspired the blog. As a test post, Matt, who is English, wrote an impassioned ode to his tea kettle. Emily followed up with a post about the importance of salt. “Both of our moms read it,” Emily recalls.

Slowly the audience grew beyond their immediate families after their recipe for chicken with lime and cilantro went viral on the discussion site Reddit. The couple watched in amazement as dozens of people over the course of a weekend posted their own photos of the finished dish and wrote about how much they enjoyed it.

The thread caught the attention of J. Kenji Lopez-Alt, an editor at the food blog Serious Eats and author of The Food Lab. Lopez-Alt, whose work explores the scientific reasoning behind home cooking with a bit of humor, was drawn to the couple’s similar style. The Cliftons began blogging for Serious Eats, which put their work in front of an even larger audience.

“That was great training for us in terms of writing for people who really like to cook,” says Emily. “You can have your own voice, but it has to be informative. You can’t go off on a huge tangent. They want the recipe.” 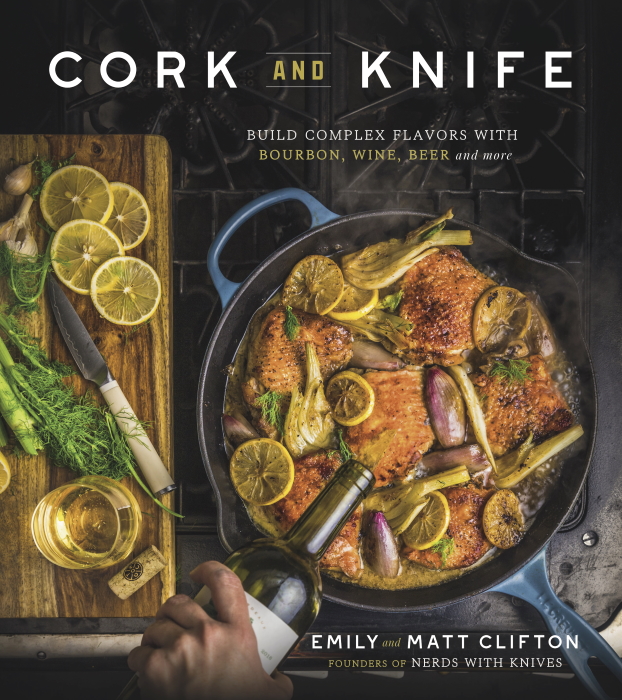 The Cliftons’ cookbook will be released on Aug. 6.

The Cliftons’ expertise in explaining why certain recipes work so well isn’t limited to their own. When I noted that many disparate recipes I’ve returned to over the years — from tomato sauce to sesame chicken to pie crusts — that contain vodka, they were instantly able to tell me why.

“Vodka cooks off so quickly that it pulls up all the molecules of flavor and aroma,” explains Matt. “It makes everything pop.”

“That’s why it works in your tomato sauce,” says Emily.

“Because it burns off so quickly in a batter, it makes air bubbles, which makes something crispy,” adds Matt.

“It makes things puff, like your sesame chicken,” says Emily. “And it hinders the formation of gluten, which is why it works in your pie crust. It kind of is this magic element.”

Nearly all the recipes in their cookbook contain alcohol, but never enough that you’d have to worry about your dinner guests being able to drive home — although Emily suggests caution with the gin-and-tonic cake. “It’s boozy,” she admits. “You can get a little silly off that one.”

So it’s not a cake for children?

“I don’t know,” she says. “It depends on how you feel about children.” 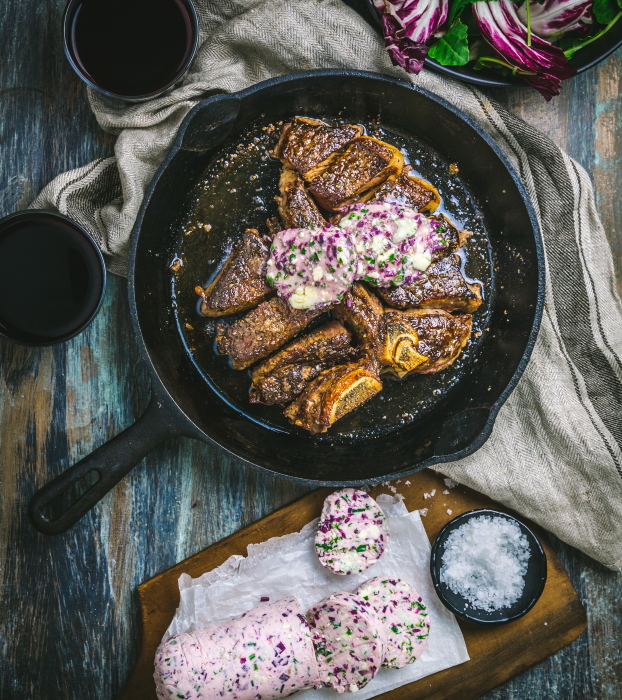 By Emily and Matt Clifton

Making a compound butter is a quick and easy way to add a bright kick of flavor to a dish. This red wine-blue cheese version is as beautiful as it is delicious, with flecks of magenta shallots and blue-veined cheese. And it’s a great example of why red wine and cheese go so well together: when the astringency of the wine meets the fullness of the fatty cheese, all your taste buds are taken care of at the same time. We love to melt it over steaks, but it’s equally good on baked potatoes and grilled or steamed vegetables.

For the red-wine butter:

To make the red-wine butter, set a small, heavy saucepan over medium heat and melt 1 tablespoon butter. Add the shallots and garlic and sauté until soft, 5 minutes. Don’t let the shallots brown; lower the heat if they begin to darken. Add the vinegar and ½ cup of the wine and simmer until there is just about a tablespoon of liquid left, about 10 minutes. Transfer the shallot-wine mixture into a small bowl and place in the refrigerator until cold, about 10 minutes.

Add the softened butter to the bowl of a stand mixer, then add the shallot-wine mixture and the last tablespoon of uncooked red wine. Mix on low until the butter is fully combined with the liquid (this can also be done by hand, with a little patience). Then, use a rubber spatula to gently fold in the chives and blue cheese. Try to keep some of the cheese in chunks. Season with salt and pepper, to taste.

To cook the steak, dry it well and season both sides generously with salt and pepper. Heat a large heavy skillet on medium-high heat. When the pan is hot, add the oil and lay in the steak. Cook it on one side, without disturbing, until it releases easily from the pan when you lift it, about 3 minutes. Then turn the steak every 2 minutes, until brown on both sides and cooked to your desired temperature (125 degrees for medium rare). Place the steak on a cutting board, top with a few rounds of butter and cover loosely with foil. Allow steak to rest for 10 minutes before slicing and serving.

Note: Porterhouse — comprising strip steak, filet mignon and the conjoining T-bone — is a decadent treat, but you can really use any kind of steak you like. Hanger, Flat Iron and flap steaks are also great choices.