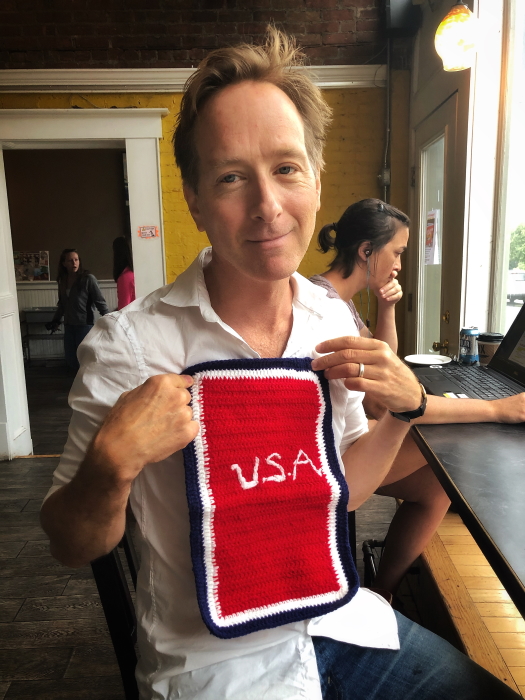 Eric Trump at a Beacon coffee shop (Photo by B. Cronin)

Eric Trump, of Beacon, is a writer and a professor at Vassar College.

In 2016, before the presidential election, you wrote an essay for Salon about the difficulty of sharing your name — including your middle name, Frederick — with the Republican nominee’s eldest son. Has it gotten worse?

No, that year was the worst. I started getting all kinds of emails and messages. One woman, for a week, left me messages saying “I’m your mother.” Finally, I picked up and said, “Mom?” There was a long silence. I said, “It’s been a long time, how are you?” She said, “Uhhhh,” hung up, and never called again. I think it short-circuited her brain. I still get emails and people mailing me gifts [see photo]. I once wrote a story about Trump Tower for The New York Times, and they had to put a disclaimer that I was not the son of Donald Trump.

Have you considered going with E.F. Trump?
It was my name first [he is 13 years older]. E.F. Trump sounds too much like E.F. Hutton.

You’re writing a book. What is it about?
It’s based on a Modern Love column I wrote for The New York Times about eros and illness. Years ago I had renal failure. While I was waiting for a transplant, I applied to the Columbia University journalism school. I earned a master’s degree with renal failure, which seems mad now. While I was there I had a relationship with a professor after taking her class. It was only 15 years later that I was able to write about it because I realized that we were not attracted to each other. We were both interested in the fact that my body was decaying and unraveling. It was the illness that brought us together.

How does that relate to your teaching at Vassar?
I teach a bioethics class called “The Transplanted Body.” We look at Frankenstein. We read a French novel called Mend the Living, Susan Sontag’s Illness as Metaphor. We look at illness as an aesthetic experience, and that will be part of my book, as well. I want to show that my illness had a narrative flow, an aesthetic component, a ritualized component. I got sick and I came out the other side, like one of Ovid’s stories in Metamorphosis. Narcissus doesn’t die, he’s transformed.

What do most people get wrong about Frankenstein?
Many people see Frankenstein as a warning against scientific progress. Don’t fiddle with nature. But the final words of Victor Frankenstein are, “I failed to do it, but maybe others will succeed.” The history of transplantation is filled with disaster and failure, people living only a few hours. What if the doctors had said, “We’re playing God, and we should stop”? I wouldn’t be here!