Beacon Will Rely on Front Lines

Beacon opens its season today (Sept. 6) at league rival Poughkeepsie at 6 p.m. The other league opponents for the Bulldogs, who play in Class A, are Pearl River, Peekskill and Pelham. 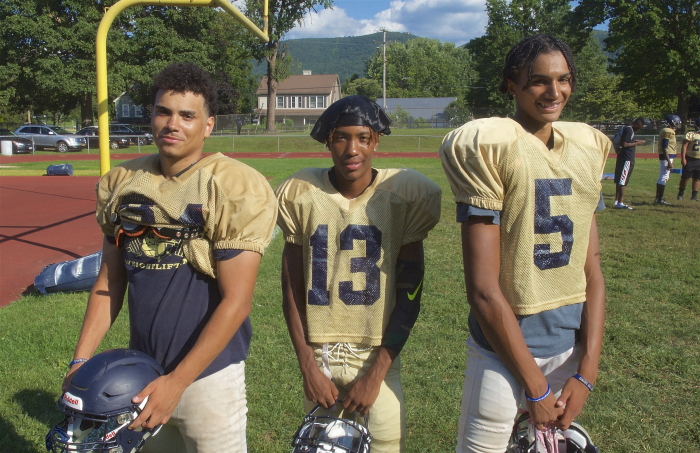 Komisar, Feliz and senior Lionel Cumberbatch (wide receiver/safety, linebacker), a newcomer to the team, will serve as captains. “All of them play other sports together, and they know each other,” Phelan said. “We have senior leaders who have taken ownership [of their roles], and to have a sophomore quarterback with them is encouraging. They all have experience and their development last year is a huge factor.”

Phelan believes the team’s line will be a strength on both sides of the ball. “We can comfortably rotate guys in,” he said. 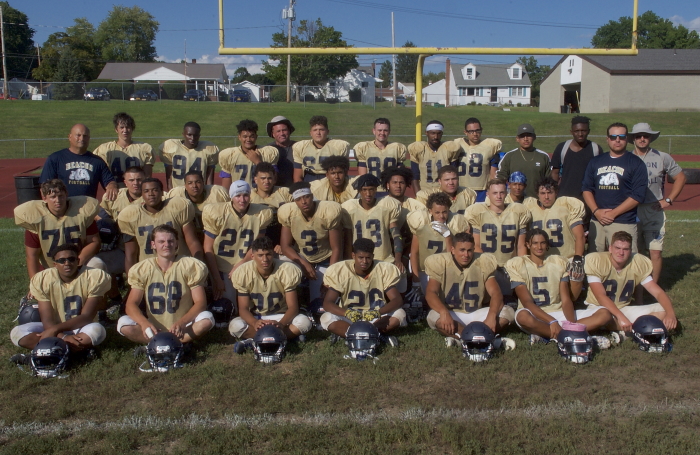 The Bulldogs (Photo by S. Pearlman)

On offense, he said Feliz, Negron and Cumberbatch can each expect to see plenty of chances to run the ball.

“They’re a big, physical group,” he said. Feliz, who was injured last year, “brings another level of physicality, and we’re hoping he can have a big senior year. Santino and Lionel are both solid, and Komisar can make plays. He’s moving along well, becoming a leader. He can throw the deep ball with touch, and he’s extremely tough.”

However, questions abound on the other side of the ball. “Our defense is less experienced than last year,” the coach said. “We hope to have a more aggressive and ball-hogging defense. We hope to have explosive playmakers.”

“Last year we didn’t know how to win,” he said. “These guys know how to finish games, they have more confidence. I feel like we have a chance to win every game we play, and we expect to have success.”

Without Star, Haldane Must Find Offense

Every season, the Haldane High School team knows it needs only one victory — against Tuckahoe, the other Class D team in Section 1 — to win a title.

But this year’s squad wants more — specifically, another shot at a state championship, after losing in the semifinals last season to Section 7 champ Moriah, 6-0. Sixth-year Head Coach Ryan McConville believes his team has the talent to get it.

The Blue Devils open the season hosting Rye Neck on Saturday, Sept. 7, with kickoff scheduled for 1:30 p.m. McConville says he expects the Panthers to be “a tough, physical team.” 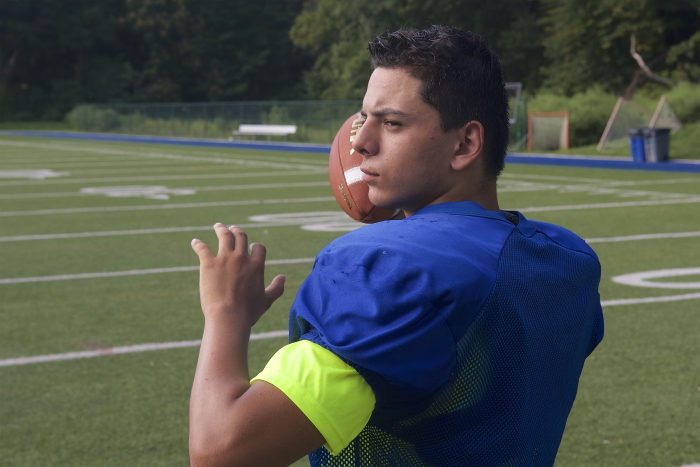 Haldane, which finished 7-2 last fall behind senior running back Sam Giachinta and senior offensive lineman Will Westerhuis, both All-State selections, has won two of the last three Section 1 titles. But the Blue Devils will surely miss both players, as well as the other members of the previous senior class, who McConville said provided “great leadership.”

The Blue Devils also lost wide receiver and cornerback Matt Champlin, who chose to concentrate on basketball during his senior year. Haldane does return four two-way starters, including junior quarterback Dan Santos, who will again run the offense. His twin brother Darrin Santos returns at tailback and linebacker; junior Christian Pezzullo as a two-way lineman; junior Andrew Aiston at tackle and linebacker; and junior Doug Donoghy at tight end and linebacker.

“Those guys, offensively, can be playmakers for us,” McConville said. “Darrin and Dan should probably get 10 to 15 touches a game, and one of our top newcomers, sophomore Soren Holmbo [at running back and free safety] — we hope to get him some touches, as well.

“That group is working hard on leadership skills, trying to challenge each other,” the coach added. “They understand what it takes. We’ve had scrimmages, practices, and guys are starting to figure out what we need to do to be successful.” 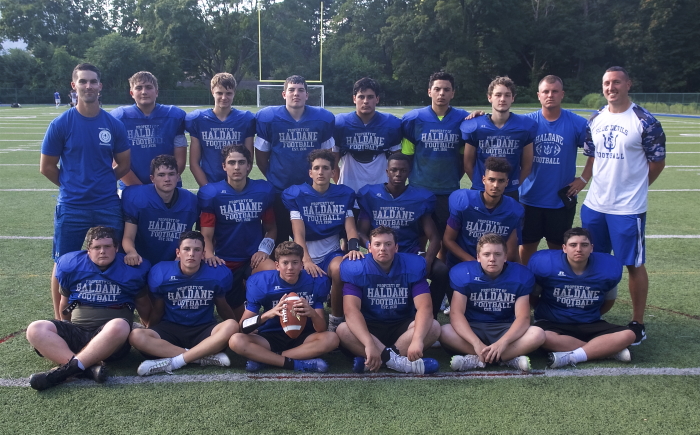 Without the 1,000 yards of rushing that Giachinta provided in each of the past two seasons, “we need to spread the ball around,” McConville said. “Darrin will be our starting tailback, and Holmbo will run as well. Darrin is up to the task, and was good last year behind Sam. We think he and his brother can be a great combination in the backfield.”

Senior Charles Benechoux, a wide receiver and cornerback, joins the team from France, where he played rugby. Junior Josh Reyes, at cornerback, along with linemen Willy Etta, Alex Ferdico and Dom Lyons-Davis will be looking to make an impact, as well, McConville said.

“The big thing is, we have to get all 11 guys to the football” on defense, he said. He expects his team to have a strong pass rush. “We’ll look to force the issue,” he said.

McConville said his team needs to limit early-season mistakes. “We can’t turn the football over,” the coach said. “And we have to limit penalties. We have to move the ball consistently, make short passes, keep things moving forward.

“We need to win Saturday, then we’ll take the rest as it comes,” he said.