Darryl Gamble and Ed Coviello, the owners of Darryl’s, a women’s clothing retailer founded 33 years ago in Manhattan, have added a Beaconesque feature to their third boutique, which opened on Main Street in October: an art gallery.

Its latest exhibit, which will have a Second Saturday reception tomorrow (Sept. 14), features paintings by Beacon artist Catherine Welshman. In October, the store will highlight the work of Jack Fuller, also from Beacon.

Gamble and Coviello, longtime partners in life and work, stock what they describe as “classic, with a twist” clothing lines, with each store — the other is in Rhinebeck — tweaked to reflect its location. In Manhattan, it’s “a bit more evening wear, more professional looks,” in Rhinebeck it’s “a little bit more relaxed” and in Beacon, “even more relaxed,” Gamble says. 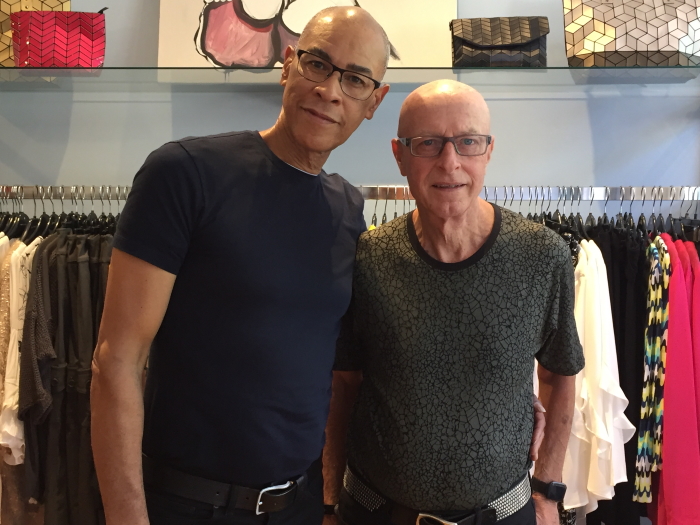 Darryl Gamble and Ed Coviello at their Beacon store (Photo by A. Rooney)

They decided to display art because the store, at 155 Main St., “wound up being right in the middle of all the galleries,” says Coviello. “I thought, Why not?”

The couple met 37 years ago. Gamble was managing a clothing store on West 72nd Street and ready to open his own place. Coviello was a special education teacher.

“Darryl has a great personality — people really like him,” says Coviello. “The store he worked at had a branch on Madison Avenue. Customers would go to the Madison store, try things on, and have them sent to the West Side for Darryl’s approval. So, we thought we’d try it for ourselves.” They opened Darryl’s on Amsterdam Avenue on Dec. 20, 1986.

The business struggled through that first winter, but the spring brought customers. “I remember March 5, a Saturday,” Coviello recalls. “Women started coming in, saying, ‘I’m looking for a dress,’ one after the other. By May we were doing all right.”

“At that time, the Annie Hall look was popular; more folksy things were big in those days,” says Gamble. “We went more feminine and classic. Not everyone looks good in a specific trend. The important thing is consistency, as well as the taste level. It’s about finding the right mix of  ‘a look’ and quality, price, fit, fabric.

“You have to know what your customer will respond to, what suits their personality as much as anything else,” he adds. “There’s a whole psychological level to figuring it out, without having a crystal ball.” 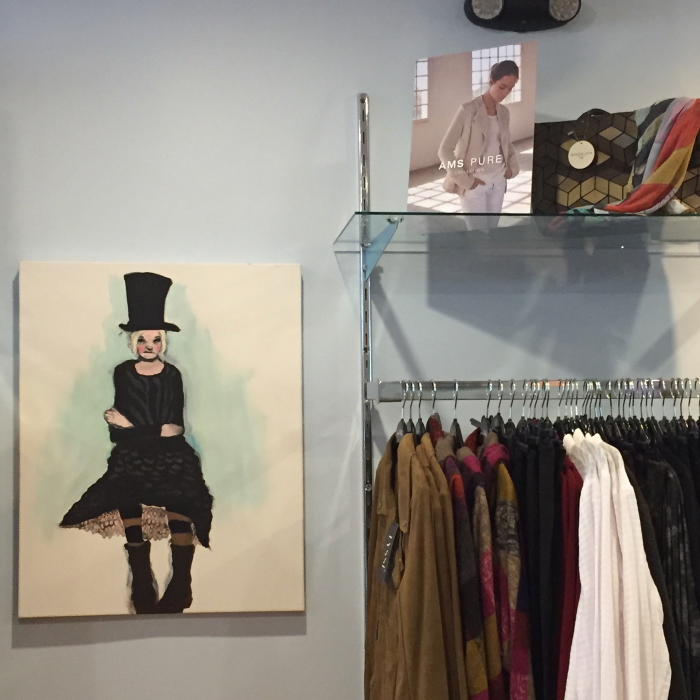 Artwork by Catherine Welshman on display at Darryl’s (Photo by A. Rooney)

The men each rotate between the stores; Gamble spends most of his time in Manhattan. They became acquainted with the Hudson Valley in 2006, when they bought a summer home, and later moved north year-round. They opened the Rhinebeck store a decade ago.

When they began considering Beacon for a third store, they feared they had waited too long. “We saw Main Street go from a lot of vacancies to few vacancies to no vacancies,” says Coviello. But a spot on the west end formerly occupied by Nella’s Bellas boutique became available.

“The biggest challenge is getting people to know us,” says Coviello. “We carry sizes 2 through 18, and if we don’t have a particular size at one location, we can easily get it in a day or two.” Their stock, which includes many pieces from Joseph Ribkoff (Canada) and Lyssé (France), consists of separates — skirts, pants, blouses — along with coats, dresses and accessories like scarves, handbags and jewelry.

Gamble says the partners have had success at home and work for more than three decades because of communication and the fact “we share the same work ethic, which is basically work, work, work. In any business, it takes time to be established. You have to give it a lot of love, a lot of hours. Plant a seed, water it. We want people to enjoy it as much as we do.”