After not fielding a varsity team for the last three seasons, Haldane High School is back on the cross-country circuit this fall with a girls’ squad.

“Shannon has been getting plenty of attention from colleges,” Locascio said. “In her first meet of the season, she set a new personal record, a good sign so early in the season. This is her third year on the team, and she’s tough as nails. She works harder than anyone.”

“Eden hadn’t run before but has been working hard and improving,” the coach said. “Eloise is a triathlete, and a good athlete. Each of them has tons of potential.” 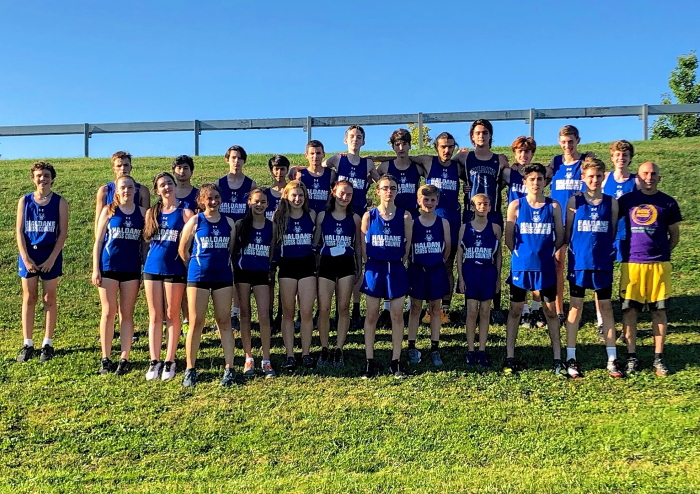 If Ferri again wins the sectional title, she will become the first female Blue Devils runner to win four consecutive times. The girls are off to a 0-2 start to the season, falling to North Salem and Pawling.

“We want them to do well and improve,” Locascio said. “But just having a team makes me happy.”

The Haldane boys, meanwhile, have their sights set on a 12th straight Section 1, Class D title. They lost their top runner, Adam Silhavy, who finished ninth at last year’s state championships, to graduation, but have five other top performers returning.

Locascio said he wasn’t planning to coach the boys’ team this year but had a change of heart. “The kids asked me to come back,” he said. “I didn’t feel like it would be right to walk away. They have realistic goals, but it will be tough to win the section again.”

Senior Noah Bingham is the captain. “He’s an incredible leader,” Locascio said. “He does an amazing job with some of the younger runners.”

“Walt and Everett have shown real improvement,” Locascio said. “Quinn is running better early in the season, a good sign, and Luke has shaved his time from last year.”

Freshmen Conrad White and John Kisslinger, seventh-grader Oliver Petkus, senior Heath Conroy and junior Ben McEwen are newcomers. “Conrad is tall and fast,” Locascio said. “He ran well in his first race. And Kisslinger has been much faster than last year.”

The team is 3-0 after defeating Dobbs Ferry, North Salem and Pawling. Both the girls’ and boys’ teams will compete on Tuesday, Sept. 24, at Croton Point Park against Peekskill and Hendrick Hudson.