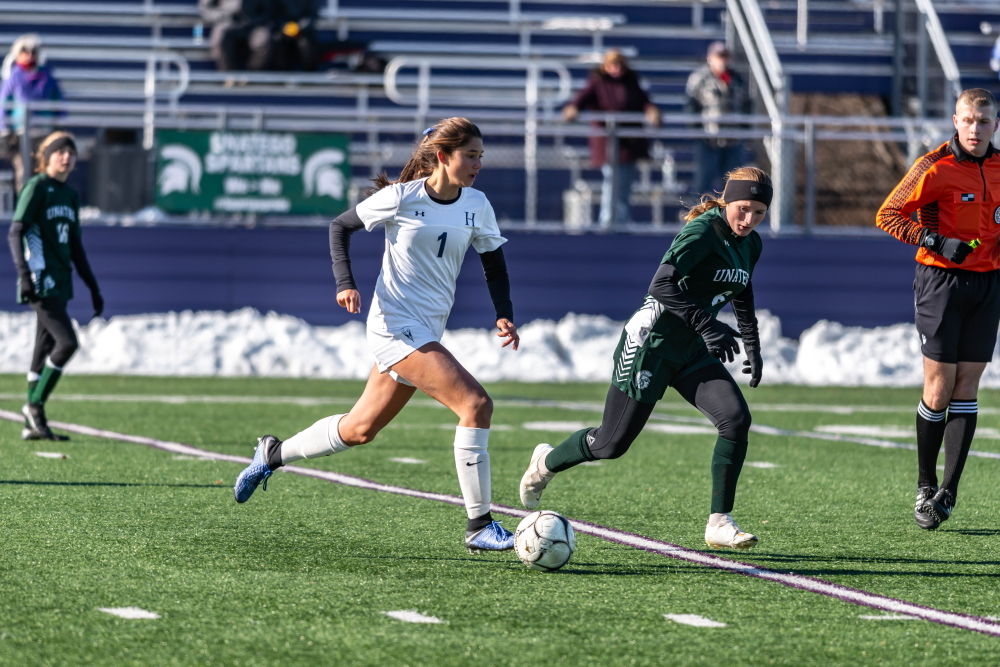 Senior Jade Villella (1), shown in the state semi-final game against Unatego, was named to the All-Section team. (Photo by Damian McDonald)

In the end, the Haldane girls’ soccer team went down the same way it had survived a week earlier.

The Blue Devils, coming off a penalty-kick victory over S.S. Seward in the regional final, saw their own season come to an end on Saturday (Nov. 16) in the same fashion, falling to Unatego, 2-1, in a shootout in the Class C state semifinal at Cortland High School near Syracuse.

After playing 80 minutes of regulation, two 10-minute overtimes and two 5-minute sudden-death sessions, the teams remained in a scoreless tie. 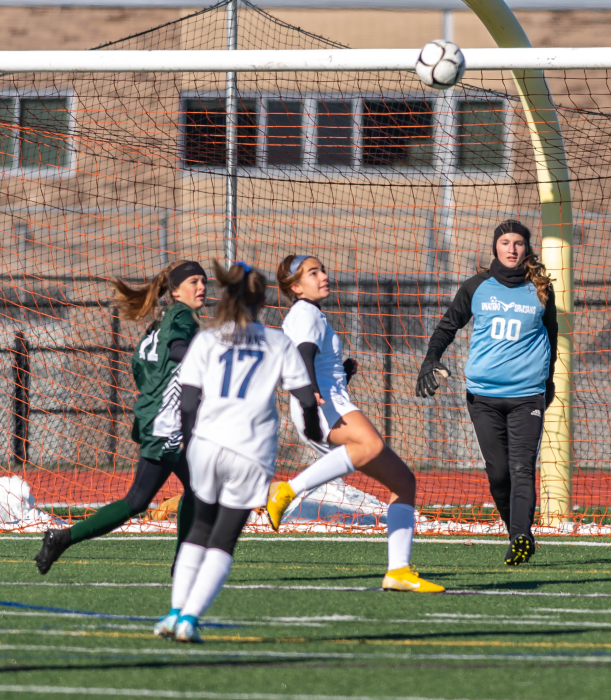 Anna Rowe keeps her eye on the ball against Unatego as Sophia Scanga (17) looks on. (Photo by Damian McDonald)

To resolve the issue, five players from each team took shots on goal. Haldane’s Allie Ferreira scored first to put her team ahead, but the next four tries by the Blue Devils were blocked or missed. Unatego (19-0-1) converted on two of its chances to advance to the state final the next day, which it lost to defending champion Stillwater, 1-0.

“To lose in a semifinal on penalty kicks against an undefeated opponent is heartbreaking,” said Coach Stephen Schweikhart. “In the last week and a half, we felt the highest of highs because of penalty kicks and the lowest of lows.”

Spartans keeper Meghan Perry came up with a huge save on Haldane’s final penalty kick, and her sister, Morgan, delivered the game-winner. 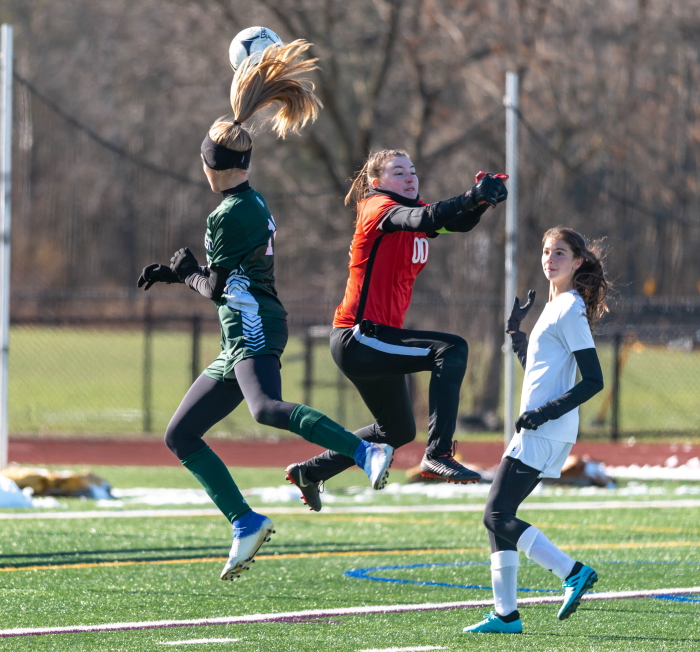 Haldane keeper Abigail Platt flies by a Unatego player while attempting to block a header while teammate Ella Ashburn looks on. Neither team scored through 110 minutes of play. (Photo by Damian McDonald)

Schweikhart credited his seniors for much of the team’s success, led by Jade Villella, who was named to the All-Section team on Monday (Nov. 18) and finished her four-year Haldane career with 55 goals. (Senior Analiese Compagnone of Beacon High School was also named to the All -Section team.)

“Jade was almost superhuman out there,” Schweikhart said. “She thwarted so many dangerous attacks and also pushed the ball up field. Anna Rowe was tireless. Abigail Platt was such a force in the net. We played two games in state play. Both went four overtimes, and she didn’t allow a single goal.

“Allie Ferreira had one her best games of the year. Bela Monteleone developed some quality chances for us on the right wing. Bela wasn’t named a captain at the start of the season, but the coaches realized our mistake about halfway through the season and elevated her.

“While they didn’t play [in the semifinal], Quinn McDonald was as good a teammate as a person could be and Shianne Twoguns, who had never played soccer, was thrust into the goal for a number of games when Abigail got hurt, and she just smiled and got it done.”